Hebrew was long dead as the language of his people.
Aramaic, a language still spoken in parts of Lebanon and Syria, became a lingua franca in the region. It is thus generally assumed that Jesus spoke Aramaic on a daily basis but it is not correct.
We need to ask, why is the New Testament in Greek?
Why was it necessary to translate the Old Testament into Greek? (The Septuagint)

His existence alone is suspect…

That’s a lie, Hebrew was never a dead language.

Being God incarnate on Planet Earth he could speak any language he chose to.

We need to ask, why is the New Testament in Greek?

Mine is in English.

Why was it necessary to translate the Old Testament into Greek?

For the same reason it was necessary to translate it into English. 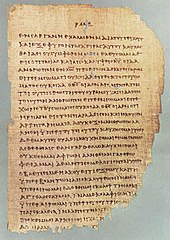 The New Testament (Ancient Greek: Ἡ Καινὴ Διαθήκη, transl. Hē Kainḕ Diathḗkē; Latin: Novum Testamentum) is the second division of the Christian biblical canon, the first being the Old Testament which is based primarily upon the Hebrew Bible. The New Testament discusses the teachings and person of Jesus, as well as events in first-century Christianity. Christians regard both the Old and New Testaments together as sacred scripture. The New Testament is a collection of Christian texts originally ... 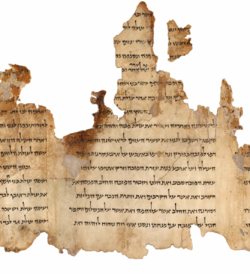 Hebrew (עִבְרִית‎, Ivrit (help·info), IPA: [ivˈʁit] or [ʕivˈɾit]) is a Northwest Semitic language native to Israel. In 2013, Modern Hebrew was spoken by over nine million people worldwide. Historically, it is regarded as the language of the Israelites and their ancestors, although the language was not referred to by the name "Hebrew" in the Tanakh itself.[note 1] The earliest examples of written Paleo-Hebrew date to the 10th century BCE. Hebrew belongs to the West Semitic branch of the Afro Heb...

I wouldn’t go that far.
I do believe he existed but in his lifetime he traveled to (northern) India and Rome. He didn’t die on a cross.

There is a claim that there were two or three individuals whose acts are projected in the New Testaments.

Of all the things to be skeptical about with regards to Jesus’ life and death, being crucified by the Romans is one of the least remarkable things.

I wouldn’t go that far.

No, I wouldn’t expect that you would.

Yet you claimed it was extinct, a dead language repeatedly which isn’t remotely true. ■■■■■■ services have been done in Hebrew continuously from the time of Moses.

Horse Hockey, there’s no evidence of that whatsoever.

Sanskrit hasn’t been spoken or used by anyone for thousands of years.

Hebrew has been in constant since it originated 5000 years ago or earlier.

Pidgin Hebrew, that is.
It is spoken in Israel. Pathetic form of corrupt Hebrew.

More baseless hate from someone who has already shown their bias and their ignorance on the subject.

It is not possible to settle the various issues regarding the linguistic milieu of first-century Palestine.

If asked what was the language commonly spoken in Palestine in the time of Jesus of Nazareth, most people with some acquaintance of that era and area would almost spontaneously answer Aramaic

The reality is that it doesn’t matter as everyone involved is DEAD. And no one can prove squat. All of it just hyperbole and conspiracy.

The Dead Sea Scrolls are in Hebrew, a particular variety of it.
It doesn’t mean, however, people including the writers and scribes of the Scrolls spoke Hebrew.

Scholars and clerics in medieval Europe corresponded in Latin.

Well that certainly isn’t true. They are written in Hebrew, Aramaic, and Greek.

Hebrew was never a dead language, it was certainly never extinct, it has been used continuously for at least four thousand years. Temple services never ceased being conducted in Hebrew and ■■■■■■ kids never ceased learning Hebrew so they could understand the services, read the Torah and the other laws and liturgical documents.

Quit making a fool of yourself.

If various languages are used, it’s a telltale sign that people were using them as vernaculars.

Palestine around the time of Jesus probably was a society with diglossia, meaning people used Aramaic and Greek for different occasions and purposes just like Brussels in the past. People used Flemish, a Dutch dialect, among themselves but used French to speak with government officials, etc.

You didn’t even know what languages they were written in a few minutes ago and now you’re going to claim to know why?

They were written by different authors, some from Israel/Judea, others from abroad.

The intended audience also has a great deal to do with what is written as does who you don’t want to be able to read it.