It's Time For Globally Open Borders

Name one good reason why we shouldn’t have open border immigration? Why do you deserve to live in great countries just because you were born there? 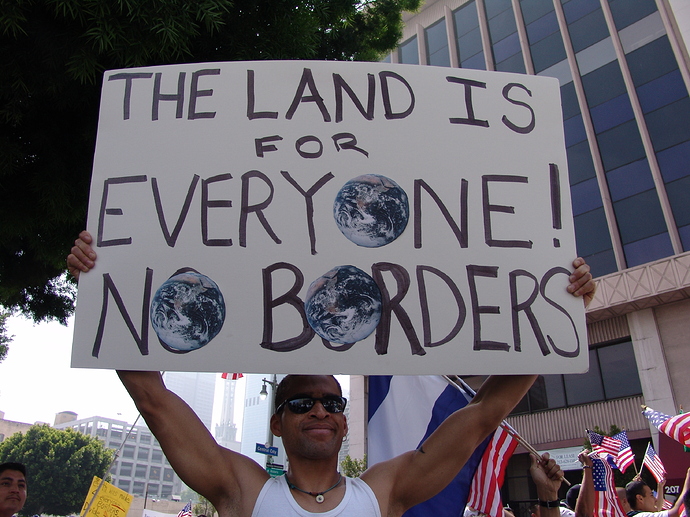 I’ll start with a few reasons:

Much the same reason you have a door to your house. You know the world isn’t full of shiny happy people holding hands, so it’s a helpful survival trait to screen people and make sure they won’t invade your home and destroy your household.

I was going to answer your question seriously because, theoretically I am an open borders kind of guy… but you wouldn’t like or understand my answer and I know mindless drivel is coming, so I’ll simplify it.

Do you like the peaceful use of your home? Your yard? Boundaries…they exist everywhere…where do your boundaries end? What would you not permit within your boundaries? Anarchy is a very difficult subject…and so is world governance.

One has to be either a. living in a 3rd world shithole, or b. a first class woke a dope to advocate for open borders. Our quality of life would go straight down the crapper in two years’ time.

Name one reason why we shouldn’t?

That the problem with Leftists, they are friends to people who don’t or deserve their friendship and enemies to people who don’t derserve them as enemies, they fashion themselves the champions of all social justice only by elevating entities over Persons and create social injustices against real flesh and blood Persons in the name of the entities they cluster men into … everything about their ideology is inverted.

Just goes to show that liberalism is in fact a mental disorder! Yes I digress!

Civilization requires order. I do not mean out of control regulations; I mean common sense. If someone works to achieve a goal, they deserve what they earned. Good fences make good neighbors. If a man lives an honorable life, and makes no unreasnonable demands, he should be left to his own devices. Anyway, it’s a very very short trip. I always kept below the radar. Just leave me be, and I won’t bust your fucking head. Easy.

Name one good reason why we shouldn’t have open border immigration? Why do you deserve to live in great countries just because you were born there?

Name one good reason why you shouldn’t let these third world invaders live in your house. Do you have a wall, fences? Do you lock your doors and windows to keep others out? Shame on you if you do, because it’s all about sharing everything you’ve got with everyone who wants to help themselves! Right?

How do you like your tax dollars going to medical care ,education and entitlements for these criminals.
Open borders allow those without skills to infest the country for businesses to keep wages low. We don’t have enough Mexican drug dealers which could be reduced with restricted immigration.
Go to the border, visit the ranchers and see the damage open will do.

It’s time for borders to start getting enforced all over the world. If you want to enjoy open borders first start by opening the doors of your house or your welfare funded apartment.

I don’t pay tax in America.

I was being facetious.

@here2bqueer what are you goin on about now fruitcake? What kind of fantasy land do you live in exactly? Whatever you think your gender is…if you still have your lady parts down there…then all those wonderful people who would flood into this country would be the first to kick your door in and take what they want. They’ll be sure that their friends will be able to take some too. You need to wake up girl. Yes I just misgendered you on purpose and I frankly don’t give a rat’s ass.

People who gave legitimacy to h2bq’s question by answering it were pwnd by trolling.

Maybe so but I’m not going to let that kind of crap go unanswered. If we do that then they win.

You think this is trolling?

I think it’s a fair assumption that anyone calling themselves “here2bqueer” on a political forum isn’t in much danger of winning anything.

yes Marx loved that idea and he was wrong of course
Wahhabi Islam loves that Idea, but most of us dont want to pray to Mecca
people like the OP doesnt understand for whatever reason is not all cultures and civilizations are equal

Germany, the UK, Italy and a few other European Countries learned that the hard way.

A country without borders is not conducive to law and order as defined by the country. Anarchy is the order of the day. How is a country to fund its defensive forces if not through taxation of all residents within its boundaries?

Globalism sucks big time. Globalism guarantees eventual anarchy or one globe-ruling dictator/oligarchy that holds ALL of the guns and weapons of war.

We are blessed (mostly) and cursed (slightly) here in the USA to have open borders between states. We can freely pass from state to state within the United States, but must remember that the constitutionally guaranteed right of states to pass their own laws often makes it complicated to keep up with what is legal and what is not in the domain you occupy…even within your home state. Counties and cities have ordinances also.

What really chaps my ass about our open borders between states is that asshole states that consider themselves sanctuaries for illegal aliens have no method of keeping the criminal bastards from traveling to other states when they so choose.

The same applies to sanctuary cities and counties. There’s no guarantee that the illegals will stay in the sanctuary zone.

Because we’re not stupid and we’d like to maintain our standard of living and keep as many criminals as possible from flooding the country.