It appears that the intended target was more of a catalyst than anything else. The lives lost on the shot down commercial airline was not in vain. Whether that was the intent one would argue is left for the nutjobs who frequent the conspiracy threads here. The point is Iranians are now protesting against the regime for how they handled this and certainly have no love lost due to Soleimani’s death which precipitated these events! Godspeed to the Iranian people! Since the Ukraine International Airlines plane crashed on Wednesday – an incident Canada and the United States said early on was due to an Iranian missile albeit fired by mistake – social media has been ablaze with criticism of the establishment. All 176 people on board the plane, en route from Tehran to Kiev, were killed.

That mood bodes ill for a parliamentary election in February, when Iran’s rulers typically seek a high turnout to show their legitimacy even if the outcome will not change any major policy.

“It is a very sensitive time for the establishment. They face a serious credibility problem. Not only did they conceal the truth, they also mismanaged the situation,” said a senior former official, who spoke on condition of anonymity.

Since the 1979 Islamic revolution, Iran’s clerics have swept aside challenges to their grip on power. But the kind of distrust between the rulers and the ruled that erupted in protests last year may now have deepened.

“There will be a short-term blow to the regime’s credibility and this will aid the pressure on the regime from the economic and political problems it had before the latest standoff with the U.S.,” said Daniel Byman, senior fellow for foreign policy at the Brookings Institution’s Center for Middle East Policy. 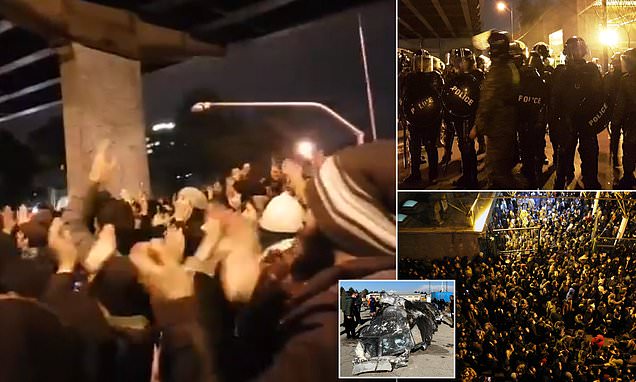 Fury on streets of Tehran after military admits shooting down plane

Angry crowds gathered on Saturday night chanting 'death to liars' and calling for the country's supreme leader to step down over the tragic military blunder, video from the scene shows. Protests against the regime of Ayatollah Khamenei erupted today in Tehran following the government admission of shooting down Ukraine Airline Flight 752. In scenes that look familiar to the 2010 &#…

I kept up with this over the last couple of days as they were beginning and building.

Sad it’s getting so little play here in the mainstream media.

Sad it’s getting so little play here in the mainstream media.

You shouldn’t be surprised as they operate out of fear of giving Trump any credit. They want to blame him for the cause.

To the brave, long-suffering people of Iran: I've stood with you since the beginning of my Presidency, and my Administration will continue to stand with you. We are following your protests closely, and are inspired by your courage.
1 Like
beadencup49 January 12, 2020, 5:21pm #6

Exactly. Until the secularists are able to remove and utterly defeat the radical Shia nothing will really change in Iran or the rest of the region.

The mullahs are on the back foot for a change.

To an extent but they can still crush any uprising because the people were disarmed long ago.

The Qds Force and paramilitaries are rabid true believers who think nothing of killing their own people by the thousands to protect the regime.

They realize that if the regime ever falls the purge that follows is going to be brutal as hell. They would all be then targets for brutal reprisals and murder if “The People of Iran” ever got the uppher hand and they’d be wiped out, run out of the country on a rail or imprisoned.

YouTube is massively censoring a video from an Iranian woman talking about how horrible Solemani was and how Iranians despised him, very similar to how they censor Crowder’s videos. FFS the regime didn’t shoot down the plane purposely!!

WTF is your problem now?

What, you believe they did?

Jesus that’s all we need is for the US to get involved in the ME again!

Talk about ‘bigging it up’ to demonize the regime! It was a fucking accident, and that’s what the protest is about - incompetence?

You could have fooled me! I thought you were yelling at people to get off your lawn!

I don’t quite know what to make of that remark?

Yes, let’s just pretend nothing is going on and let Iran keep killing Americans and threatening the flow of oil from the gulf for another forty years.

No, they are protesting the regime again just as they have been frequently for the last several years.

I give Trump complete credit for starting another revolution that could lead to another Middle East bloody civil war like Syria. The consequences are wholly unknowable. The US cannot predict with certainty how the Iranian government responds. Or whether this would lead to its collapse. Or what it’s replacement looks like. Or whether Russia and China interfere and own the outcome…

Again, Trump is doing everything that bodes against his campaign promises.