BY CHARLOTTE CUTHBERTSON AND ZACHARY STIEBER

ACUNA, Mexico—Some of the thousands of illegal immigrants who have amassed near the Texas border are leaving the United States, returning to Mexico to pick up supplies or to avoid being deported back to their home countries.

Haitians and others were witnessed on Sept. 20 crossing the Rio Grande to enter Acuna, Mexico, as they consider their options following a U.S. crackdown on the illegal immigrant camp under the International Bridge just north of the border in Del Rio, Texas.

Phanel, a Haitian who has been living in Chile for three years, was one of the immigrants who went to Acuna. He told The Epoch Times he was stocking up on supplies, including water and fruit, after hearing around the encampment that everybody who stayed would be deported.

Phanel, who declined to give his last name, said he was considering what to do next.

Yaneth, 32, whose husband is Haitian, also expressed concern about being deported. She planned to venture back to Del Rio to get her family, including her partner, and return to Acuna to try to formulate a plan.

Recounting a harrowing journey from Chile, Yaneth said that most women who travel through the Darien jungle get raped.

“I’m not going back,” she said, adding that the family would likely go to a different part of the U.S.–Mexico border and try to cross there.

People carry supplies from Acuna, Mexico, on their way back to Del Rio, Texas, on Sept. 20, 2021. (Charlotte Cuthbertson/The Epoch Times)

Nader Alth, 39, wasn’t as certain of heading to a different spot on the border. The Haitian native, who was with his 9-year-old son, was looking for a shelter in Mexico and said he’d stay there for now.

The Del Rio area has become the epicenter of the Biden administration’s border crisis, which has escalated since President Joe Biden took office in January, after which he abruptly reversed or altered key Trump-era policies such as the Migrant Protection Protocols, border wall construction, and the expulsion of illegal immigrant children through pandemic-era powers.

Homeland Security Secretary Alejandro Mayorkas traveled to the area on Sept. 20 to get an on-the-ground operational update and see firsthand the huge, litter-ridden camp that has sprung up under the International Bridge in the Texas town.

Mayorkas said the surge in immigrants was “rather sudden” and “rather dramatic,” prompting a large-scale response that has included moving some 6,500 immigrants to other parts of the border in the past several days to ease the burden on the overtaxed agents in the Del Rio Border Sector, while sending approximately 400 agents and officers to the sector.

From Mexico side of Rio Grande: A new border crossing area has formed downstream between the US and Mexico as the weir dam was blocked by US law enforcement.

Many leaving US to avoid deportation, others getting supplies from Acuna, Mexico. pic.twitter.com/V5y4ZAL3Gi

The Department of Homeland Security conducted three repatriation flights to Port-au-Prince, Haiti, from Del Rio on Sept. 19, returning 327 Haitian nationals to their home country. DHS expects to conduct one to three such flights per day for a while and is attempting to secure additional planes to carry out more flights.

Mayorkas denounced what he described as “false information” driving the surge. He said the message to people thinking about making the journey from the south is that “Our borders are not open and people should not make the dangerous journey.”

“If you come to the United States illegally, you will be returned. Your journey will not succeed and you will be endangering your life and your family’s life,” he said, adding that many of the immigrants would be deported.

While Biden administration officials have emphasized the message for months, it’s been undercut by some of the worst border numbers in history and by officials allowing a large portion of the immigrants to stay in the United States, as well as the rollback of various immigration enforcement schemes, such as the protocols.

Mayorkas later denounced smugglers, saying: “It is tragic to see families, vulnerable individuals, who have been deceived by treacherous and exploitative smuggling organizations. It is tragic and it is heartbreaking.”

How many crisis can one president create

You cannot count that high.

Did you see the mud Huts they are building in Texas

ROTFLMAO. Bidet lets in over 1 million illegals claiming ASSylum and you cheer the removal of 14K people.

What’s the difference between the Haitians and the Hispanics claiming ASSylum?

Not a damn thing, both want into the US, both broke our laws crossing the border and all need to be deported.

But the village idiot with dementia will never do that.

Maybe JoeBob just doesn’t like black people and truly is a racist. 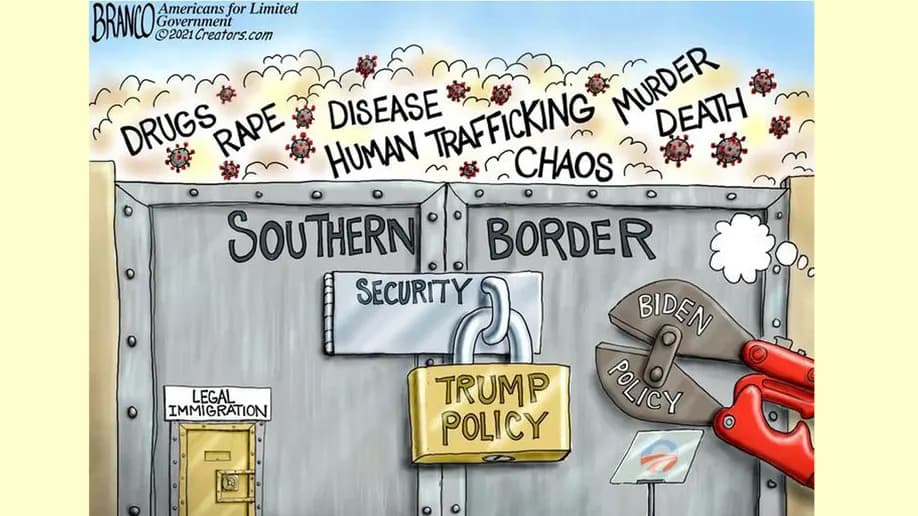 As much as you may desire for the United States to rid itself of the “blight” of illegal immigrants, you aren’t going to see it happen. Not unless you want to destroy the nation, which some on the far right are already on the verge of doing. There are those who believe it’s their “patriotic duty” to be at the front lines protecting the nation, as if the nation was merely an armed camp. It’s an insane concept and it’s totally in-American. You people are insane.

It 's about legal immigration not what we have today, just walk across the border and disappear into the US.

It’s about the US choosing the best and brightest to advance our country not just minimum wage labor which we don;t need competing with our own minimum wage workers.

It’s about choosing people who want to be here and assimilate into our culture learning our language.

It’s not about building a minority dedicated to a party to ensure permanent control of the country.

While you asswipes hide in your safe places and whine like bit@hes !!!

Well my friend, why don’t you go to the border, adopt a family like adopt a pet, and pay out of YOUR pocket ,all their health, education, food, housing and any fines or costs they may incur in criminal activity including lawyer fees.
Your such a great Liberal, set the example.

How many immigrants have come here because they wanted to legally and helped to build this country . They learned to speak English, assimilated into our cultural while keeping their culture alive and not expecting handouts.

Now the Mexican government should deport their ass.

What incentive do they have?

Funny… we think it’s you that are insane. Now what?

They need to expand the drug trade in Haiti. At worse, they could stay and work in the drug labs.

The Biden administration is deporting them…… 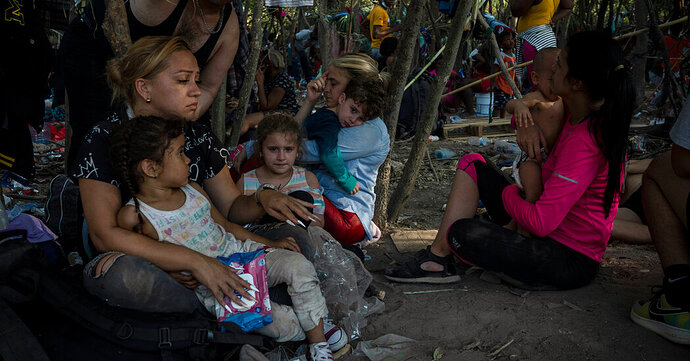 The U.S. will begin flying migrants back to Haiti and other countries on Sunday as President Biden struggles to manage an immigration system already buckling under record migration.

These are the same people who make such false claims on a daily basis, is rich seeing them come here and constantly whine. 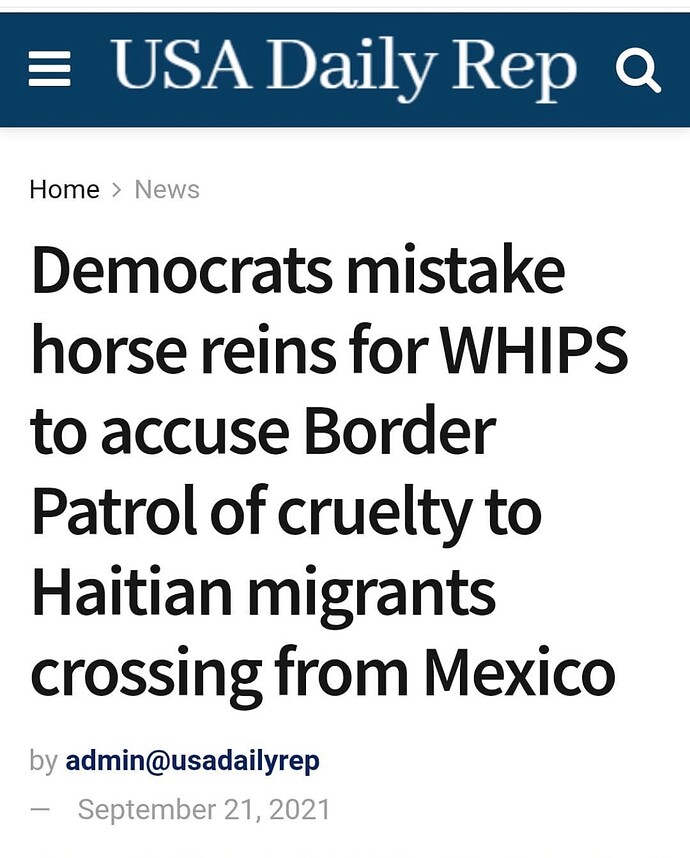 Over 1 million illegals have entered the US this year a he makes a stand with 14K Haitians.

Of 3,300 migrants processed Sunday from the 15,000 group under the Del Rio bridge, 327 were deported to Haiti. That would suggest 90 percent remain indefinitely in the US with a “notice to appear” which we know isn’t worth the paper it’s written on