House votes to send AOI to the senate

What I find hilarious in this is that republicans have spent nearly a month criticizing Nancy Pelosi for not sending the articles of impeachment to the senate. And then given the opportunity to do just that, they vote against it… The vote will enable the Senate to begin preliminary steps in a historic trial centered on Trump’s conduct toward Ukraine.

What I find funny is that three of the “jurors” in the forthcoming impeachment trial said on live TV last night that they already made up their minds about the accused before they have heard any evidence.

Well, neverminding the preponderance of evidence heard in the house last year. What about similar statements made by GOP senators?

The evidence presented doesn’t really matter because the jurors have already made up their minds. Also, full evidence and testimony wasn’t presented as Democrats in the house blocked Republicans from calling witnesses or presenting evidence of their own.

How about addressing my point in the op???

Concerned about witnesses? Me too. If the GOP is going to call for testimony from the Bidens they are just promoting Russian propaganda. Shouldn’t someone ask Moscow Mitch why he’s doing this.

The new standard set by the progressive leftists, yes that is you monte.

Hey, use the witnesses the House used what can be better than that. Should be all you need to convict.

Or is the case and witnesses and their hearsay not quite cut it??

Concerned about witnesses? Me too.

Exactly, why not just go with what they have and expose the hearsay which is not allowed in a trial.

The Democrats conducted a biased witch hunt in the house and now you are all upset that the Republicans are going to likely proceed with the show trial and ultimately dismiss it out of hand because of the lack of evidence the Democrats provided in the first place? Please explain further.

and now you are all upset

Not at all, I think that in the post you quoted I provided a set of laughing emojis to demonstrate my amusement at the republicans interest in witnesses in the house and their disinterest in the senate…

If there’s any legitimacy to the allegations of the Biden’s engaging in criminal activity then there should be an investigation by our DOJ and prosecution if merited.

But it will have nothing to do with Trump and his abuse of power that resulted in a house impeachment.

Joe Biden’s notional involvement in Crowdstrike and Hunter Biden’s position on Burisma’s board are things that do Republicans good only if raised in forums that do not allow any examination of the evidence at all, or even counterarguments. The threat to subpoena them is a completely hollow threat, a threat made only in forums that do not allow any analysis of the actual consequences of that threat being carried out.

If I were in McConnell’s place, I would be much more worried about evidence and testimony about Crowdstrike and the fact that a relative of Biden took a cush seat on a corporate board, than I would be about anything Bolton could say. Bolton, at his very worst for their side, is going to put a negative interpretation on the facts of Trump’s drug deal with the Ukraine that we already know. His negative spin, if that’s how he breaks, would be easily dismissed as the sour grapes of a Never Trumper disgruntled fired employee of the president.

In contrast, let Trump’s defense team spend days laying out to the public the whole Crowdstrike fantasy. Quite aside from the massive bogosity of this conspiracy theory that will be evident even if the impeachment managers are not allowed to present counter-evidence, the fact that Trump responded to this massive conspiracy against the US that his lawyers will build up, by sending in Giuliani rather than the CIA, NSA, DIA, FBI, DoJ and – initially anyway – the State Department, would emerge as a more telling reason to remove him from office than the case we heard in the House Intel Committee.

This threat to turn the impeachment trial into a trial of the Biden’s, would, in effect, turn that trial into a trial over Crowdstrike and the True Server and the Deep State. Those of us on the left want that because that might actually get Trump removed, so no way does McConnell want that. He doesn’t want witnesses or evidence at all, about anything, because any such creates risk of the process spinning out of his control and turning into an actual examination and display of the evidence surrounding any aspect of this matter, no corner of which does his side anything but harm. But if he had to prioritize what aspect of the Ukraine affair he doesn’t want there to be any discussion deeper than drive-by comments, Trump’s belief in Crowdstrike and Deep State would top the list. 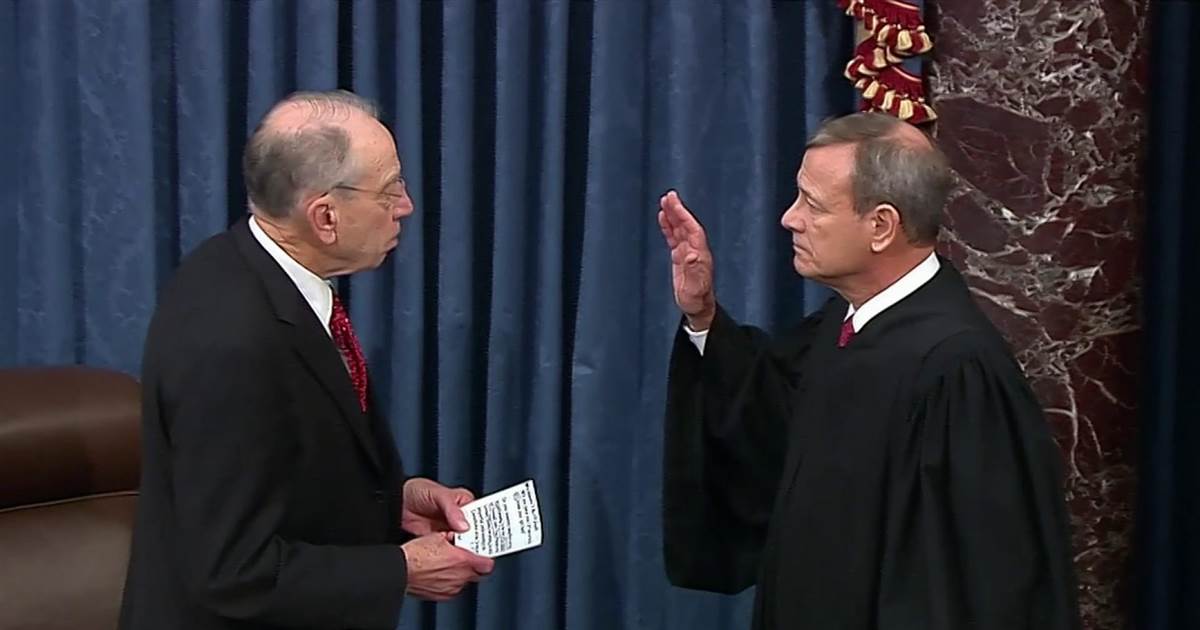 'Disaster': How judge in Trump impeachment trial may compel witnesses and...

Pres. Trump is headed for a Senate impeachment trial overseen by a judge he once called an “absolute disaster,” Chief Justice John Roberts, who was just sworn in. While many key decisions will be up to votes by the Senate, a Chief Justice may break...

Yes and, “No he doesn’t have a right to face his accuser because this isn’t a criminal trial”.

Well then Nancy should have included it in the articles of Impeachment.

Yeah I am going to disagree with you on all accounts, based on your obvious partisanship as well as being grossly misinformed. Republicans don’t want a trial with witnesses as the Ukraine Burisma issue was a giant graft which implicates them as well. (See Lindsey Graham) Trump has nothing to do with Ukraine and the rampant corruption that has been going on for many years and Crowdstrike was nothing more than a strategy concoction by the deep state at the behest of the swamp to deflect from revealing where all the dead bodies are buried.

As your partisanship is apparent in hopes of creating a premise to have a smoking gun to implicate Trump I assure it isn’t there, therefore I ask you what evidence do you speak of? You want to be objective? That goes both ways and from where I am sitting as someone in the legal profession the evidence doesn’t hold to the light of day if a proper vetting process had taken place. In other words you advocate the double standard while ignoring due process to actually see the facts in concrete terms.

Finally the only reason you are putting forth such a false premise as well why this impeachment process was permitted to continue on in such farcical fashion is because you bought into the legal arguments presented by the progressive partisan Lawyers at Lawfair that used relativism to promote the ambiguity of the facts which was their main objective and why they were appointed by the House Democrats in the first place. Relativism is going to lose big when objectivity returns the realm of Truth not the end of grand narratives or mini narratives for that matter. (see Lyotard)