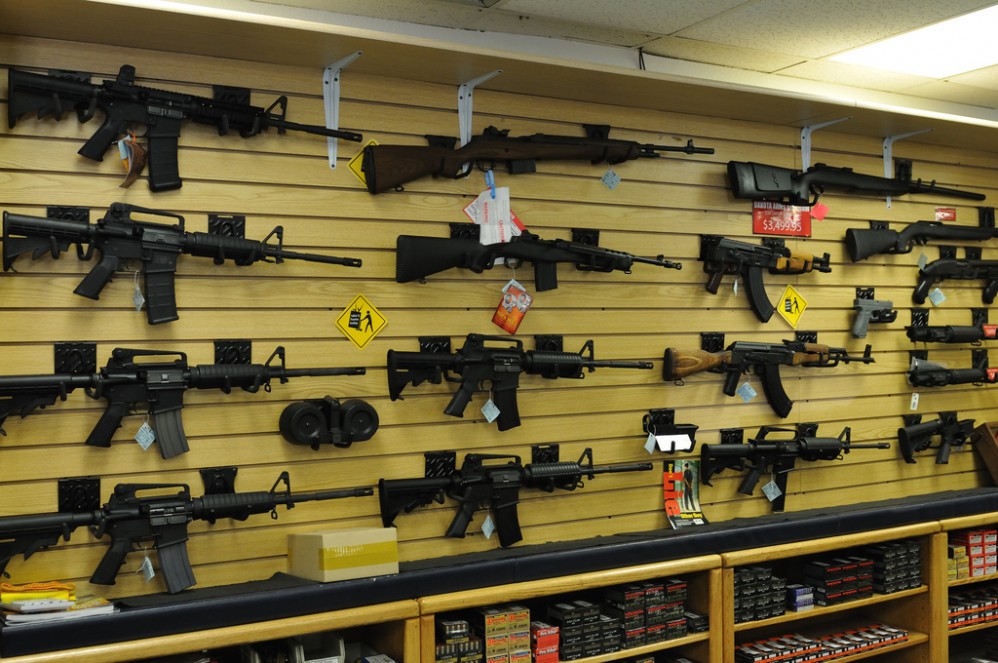 This has me worried. The bill will easily pass the House and move on to the Senate where the RINOs just might jam this through.

The House is slated to vote Wednesday on landmark legislation to require universal background checks for gun sales, a top priority for Democrats.

It will mark the most significant gun control vote in years after the Senate failed in 2013 to pass similar bipartisan legislation to expand the federal background check system.

It’s not the only day this week the House will take up legislation to address gun violence.

House Democrats plan to follow Wednesday’s vote with another on Thursday for a bill to lengthen the review period for background checks, which is meant as a response to the 2015 shooting at a historic black church in Charleston, S.C.

“We have been partaking in a grisly ritual. We have a mass shooting, we have a moment of silence, and then there has been inaction. This signifies the end of that,” said Rep. Katherine Clark (D-Mass.), vice chair of the House Democratic Caucus who helped lead a sit-in on the House floor after the 2016 shooting at a gay nightclub in Orlando, Fla.

Both bills face stiff opposition from the National Rifle Association (NRA) and most Republicans in Congress.

But it’s not expected to attract more than a handful of House GOP votes beyond the five who have co-sponsored the bill: Reps. Brian Fitzpatrick (Pa.), Brian Mast (Fla.), Fred Upton (Mich.), Chris Smith (N.J.) and King.

Democrats’ decision to vote on the legislation in the first 100 days of the new Congress - and introduce it in only a few days last month - demonstrates the shift in politics surrounding gun control from as recently as a decade ago, when they last controlled the House.

In 2007, when Democrats last took over the majority, Congress passed legislation to encourage more states to submit red-flag cases to the FBI. President George W. Bush signed the law, which came in response to the Virginia Tech shooting that same year.

But the law did not restrict gun sales or ownership, and Democratic leaders at the time took pains not to promote legislation that did so. The caucus then featured more conservative-leaning Democrats, including many who were gun rights defenders, and gun reform was still thought to be a third-rail of politics that could threaten Democrats in red-leaning districts.

Not only has the number of Democrats resistant to gun control declined steeply, but a long string of high-profile mass shootings has shifted public opinion in favor of tougher laws. Those factors, he said, have freed Democratic leaders to move quickly on the background check bill this year.

“The carnage that we’ve seen perpetrated by gun violence over the last decade has heightened the American people’s concerns,” Hoyer told reporters in the Capitol.

“It was controversial within our own party, and we didn’t have much confidence that it would be able to pass,” he continued, referring to the years between 2007 and 2011, when Democrats last held the gavel. “And there are still differences within our party as to how far you want to go. But we think this piece of legislation [background checks] and the ‘Charleston loophole’ closing is something that the overwhelming majority of the American people will want us to support.”

Case in point: Freshman Rep. Lucy McBath (D-Ga.) represents a suburban Atlanta district that President Trump won narrowly in 2016. Yet she won what had long been a GOP-held seat while actively campaigning for gun safety measures.

McBath became a gun control activist with Everytown for Gun Safety and Moms Demand Action after her 17-year-old son was shot and killed following a dispute over loud music.

This week’s votes, McBath said, are “reflective of our changing national conversation around gun violence.”

And the conversation is also personal for multiple other current and former members of Congress.

And former Rep. Gabrielle Giffords (D-Ariz.), who was shot in the head at a constituent event in 2011 and now heads an eponymous gun control advocacy group, also rallied supporters at a separate event outside the Capitol.

“I am never going to forget the day that I received a phone call when I was 24 years old telling me that my father was shot and killed by a criminal with a gun. Unfortunately, thousands of Americans in this country now share the same story as mine,” Mucarsel-Powell said.

But House Minority Whip Steve Scalise (R-La.), who was nearly killed in 2017 after a man targeting GOP lawmakers opened fire on a congressional baseball practice, is on the opposite side of the debate. He doesn’t think the legislation would have necessarily prevented recent mass shootings. The man who shot him, for example, had obtained his firearms legally.

“If you look at the bill, it wouldn’t have stopped many of these mass shootings. What it would do is make it harder for law-abiding citizens to exercise their rights,” Scalise told The Hill on Tuesday.

At the same time, Democrats have carved out some exemptions in the universal background checks measure for gun transfers between family members and for use in activities like hunting.

The legislation also offers an exception in cases of temporary transfers “necessary to prevent imminent death or great bodily harm.”

Democrats plan to allow votes on amendments to clarify that those instances would apply to people at risk of committing suicide or who face the threat of domestic violence, sexual assault or stalking.

But Republicans are pushing for more exemptions in the legislation.

Rep. Debbie Lesko (R-Ariz.), herself a domestic violence survivor, called for specifically allowing firearms transfers to victims of domestic violence or sexual assault who have court-issued protection orders. She questioned whether the bill sufficiently defined a temporary transfer or what could be construed as “imminent death.”

“I think we should at least define what these terms mean,” Lesko said of the Democrats’ proposal.

Thompson dismissed criticism that his legislation wouldn’t have prevented recent mass shootings, arguing that shouldn’t be a reason to reject expanding background checks.

“As far as anybody who says, ‘Well, this bill wouldn’t have solved this incident’? The only thing that will solve every one is to do away with guns,” Thompson said Tuesday.

The next bill, slated for a vote on Thursday, is authored by House Majority Whip James Clyburn (D-S.C.) and designed to close the so-called Charleston loophole.

The shooter in that massacre, Dylann Roof, would not have been able to buy a gun if a federal background check examiner had obtained an incident report stating that he had admitted to possessing drugs.

Clyburn’s bill would extend the review period to 10 days and allow a buyer to request a review if the background check hasn’t been done by that point. The gun sale can proceed if another 10 days go by without a response.

And Democrats expect to take up more gun control legislation in the coming months, although there’s still debate over what should come up next.

Gun control advocacy groups like Everytown have called for measures such as allowing family members and law enforcement to temporarily block a person from buying a gun if they pose a threat to themselves or others, funding research into gun violence and preventing domestic abusers from possessing firearms.

Rep. David Cicilline (D-R.I.), who heads House Democrats’ messaging arm, recently reintroduced legislation to ban assault weapons. He acknowledged that he hadn’t yet spoken with other members of leadership about taking up his bill, but predicted the House would eventually consider more gun control measures.

“I’m confident that we’re going to do more than the universal background checks. This is the first bill. And it will be up to the caucus whether there is sufficient consensus around the assault weapons ban, whether we bring it to the floor or not,” Cicilline said.

Another stupid attempt to address a problem that will NEVER be resolved by taking guns from honest, law abiding gun owners.

I wouldn’t be too worried @Southern there is no way that this makes it through the Senate and on to the President’s desk. Even if it did, there is no way Trump signs this.

Well I do agree, but just as an update this bill just passed the house. Not surprising!

It doesn’t matter what the House passes. There are still state’s rights in play. For example, in my state,
the Vermont Constitution of 1777, dating well before the Bill of Rights to a time when Vermont was an independent republic, guarantees certain freedoms and rights to the citizens: "That the people have a right to bear arms for the defense of themselves and the State – and as standing armies in time of peace are dangerous to liberty, they ought not to be kept up; and that the military should be kept under strict subordination to and governed by the civil power. It doesn’t matter what the federal level socialists say.

We should ban cars. Rich car makers think it’s their interest to sell dangerous assault vehicles (why do you need a car that goes faster than 40 mph?) is more important than children’s lives.

So if the Constitution isn’t the law of the land - I hope you all realize that means there isn’t one.

How can there be a law of the land with members of congress and the senate commit treason on a daily basis? I mean Hillary, Bill, Brennen, Holder, Yates, Powers, Rice, Obola, Kerry, Schiff, McCAbe, Comey, Rhoads, Jarrett, Feinstein, Rosenstein, Mueller, and probably a lot more I am leaving off the list get to walk scott free without being held to account? Without an equal applied rule of law to all US citizens, there can be no such premise!

Setting aside the Constitution for a moment, you’re theoretically right. If you could simply cause all firearms on the planet to vanish at this moment… No one would have to worry about getting shot.

But since that isn’t possible and you’d only be banning firearms from the law abiding people, the criminals would be armed and could take advantage of the unarmed law abiders.

But regardless, we need them in case the government becomes completely tyrannical and starts coming after us.

Because, clearly, if there is a ban on guns then everyone will turn them in. Just like prohibition stopped people from drinking alcohol. Oh wait.

How are you going to disarm the millions of criminals that already have them illegally? I have yet to see any successful attempt by any government at doing this.

Of course the primary reason for having an armed populace is not to protect themselves against other citizens (although this is a valid reason), but rather to safeguard against tyrannical government.

I say ban all knives. Your only argument could be personal cooking, yet, if no one has one you have nothing to worry about.

I say ban all books. Your only argument could be personal reading, yet, if no one has one you have nothing to worry about.

Didn’t you get your (allegedly) black ass spanked enough the last time you were here?

What do you propose to do about the Constitution? Ignore it or change it?