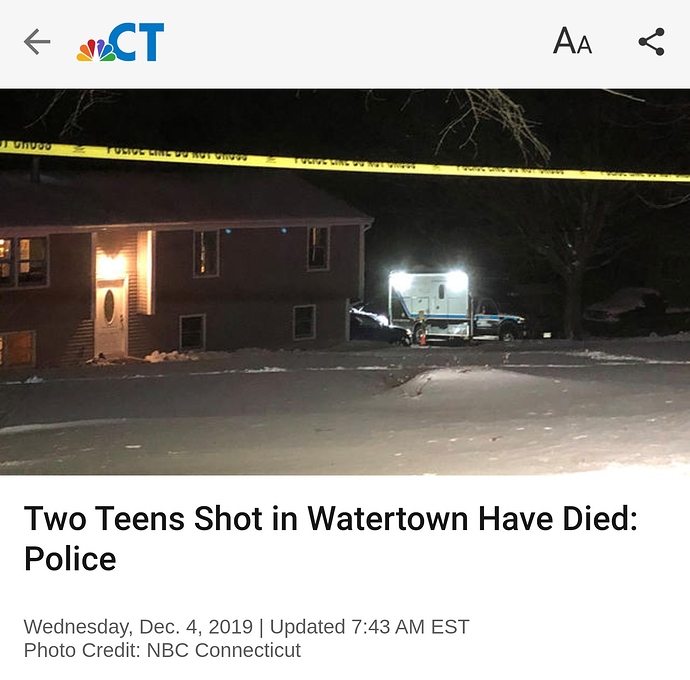 Connecticut has some of the strictest gun laws in the country, yet criminals will still get their hands on guns and use them against innocent people. More proof that gun bans don’t work.

Inside the home, police also found man suffering from an apparent self-inflicted gunshot wound and he was pronounced dead at the scene, according to Watertown Police.

Police said they responded to a home on Litchfield Road just before 10 p.m. after a woman called 911 to say her boyfriend shot her children.

When officers arrived, they found a teenage boy and a teenage girl suffering from gunshot wounds. The siblings were rushed to Waterbury Hospital with life-threatening injuries.

Watertown Police Detectives with the assistance of the Connecticut State Police Major Crime Squad are actively investigating the triple shooting.

Two teenagers have died after a shooting in Watertown Tuesday night, according to police. They responded to the home after the mother of the 15- and 16-year-old siblings called 911 and said her boyfriend...

The only people who closely follow gun laws are law-abiding citizens. The left knows this. They know that the majority of the population will do whatever they can to follow the law as closely as possible - like lambs to the slaughter.

Don’t worry. The liberals in Connecticut will just use this as an excuse to pass more gun laws.

Connecticut: a pretty state that is absolutely fucked politically.

Don’t worry. The liberals in Connecticut will just use this as an excuse to pass more gun laws.

The police should have been there before the shooting started because that’s how liberals say it’s supposed to work.

You just described the vision of all gun grabbing leftists everywhere.

If there was history of domestic violence between the boyfriend shooter and the mother then it throws the gun control narrative completely out the window. The argument is that domestic abusers aren’t supposed to be able to get their hands on firearms. We all know that isn’t the case as there are countless examples of this happening.

My sister and brother-in-law live in Connecticut. When they passed all of those gun bans he went and bought a shitty little cabin in Pennsylvania and keeps all of his good stuff locked away there. He only keeps a revolver in the house and even then the cops had to be made aware and it had to be registered.

There is an update to the story:

Police identified the suspected shooter as 42-year-old Paul W. Ferguson and said he was pronounced deceased at the scene from an apparent self-inflicted gunshot wound.

The mother of the teenage victims was at the scene when the shootings happened and was not injured, according to police.

Based on the preliminary investigation, there was an argument between Ferguson and one victim and the victim’s mother intervened to stop it, according to police.

They said Ferguson had a handgun, both victims were shot and Ferguson closed himself in a bedroom and apparently shot himself.

Police said Ferguson is a convicted felon, who would not have been allowed to possess a firearm.

Not only did he use a firearm illegally, he was a convicted felon and wasn’t supposed to have one anyway. Nice.

a pretty state that is absolutely fucked politically.

That’s the dems history , find a State and fuck it up !!!

Police said Ferguson is a convicted felon, who would not have been allowed to possess a firearm.

Republicans need to hound Democrats when things like this happen.

Right, because there are as many guns in America as people.

Care to describe what that might look like? I am from CT and our gun laws are downright draconian, yet a convicted felon still managed to acquire a firearm and use it to commit murder.

If the gun laws and bans that already exist in CT actually worked then this never would have happened.

Connecticut has higher gun ownership than Rhode Island, New York, New Jersey and New Hampshire. There’s still plenty of firearms out there and fire arm ownership in Connecticut is on the rise.

Do you really not know what complete gun ban is, or would look like.

I’d like to see the data that supports that claim. I am 20 mins from the NYS border and outside of the urban areas, NY is a massive and rural state loaded with hunters and outdoorsmen.

There’s still plenty of firearms out there and fire arm ownership in Connecticut is on the rise.

Again, I’d like to see the data that supports that. Gun stores are closing, not opening. FFLs are getting harder to find. CT has incredibly restrictive laws on guns and ammunition. Getting a gun is a difficult and time-consuming process, compared to how it used to be.

Do you really not know what complete gun ban is, or would look like.

No - I really don’t. What do you mean? In all of Connecticut or the United States?