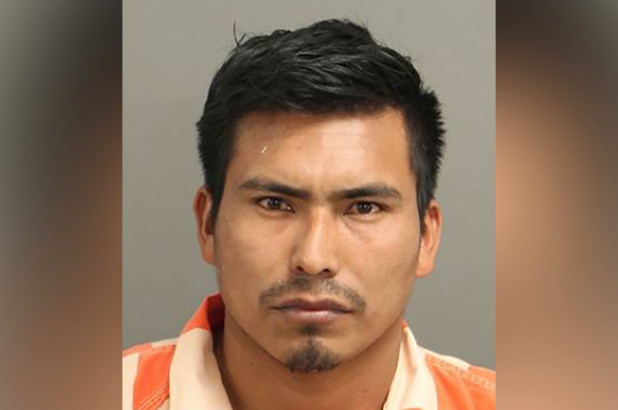 This is what happens when the world of diversity and big tech collide on a brainwashed population taught to treat everyone as equals. Google Translate-enabled rapes perpetrated by low-IQ mestizos who no speekaayy in-lish.

A Spanish-speaking creep in North Carolina used the Google Translate app on his cellphone to tell a 15-year-old girl he just raped that she was pretty, according to reports.

Victor Emandes-Ramirez, 33, is accused of kidnapping and sexually assaulting the teen as she walked to a bus stop early Thursday in Wake County, the News & Observer reported.

After grabbing the girl, Emandes-Ramirez, of Zebulon, allegedly forced the victim into his car before taking her to shed behind a mobile home, where he forced her to perform sex acts, according to a search warrant application.

Emandes-Ramirez, who doesn’t speak English, then drove the teen back to school – and used Google Translate to tell her that she was attractive and ask that she not tell anyone what just happened, according to the warrant.

He was arrested later Thursday after his Hyundai Sonata was caught on surveillance footage at the teen’s school, police said.

Emandes-Ramirez — who has been charged with first-degree kidnapping, statutory rape of a child and statutory sex offense with a child – remained jailed in Wake County in lieu of $1 million bond as of Wednesday. He’s set to return to court on Jan. 30, records show.

The teen, meanwhile, told investigators that a man named “Victor” had attacked her while on her way a Wake County high school, WNCN reported.

The suspect at the time was wearing pants with white paint on them, the victim told police.

A message seeking comment from Google reps was not immediately returned.

The teen’s father, meanwhile, said he hopes the suspect is targeted by other inmates while in custody.

“It could have gone a lot of different ways, but luckily, the sheriff got him before I did,” he told WRAL. “I hope he gets life in prison, and I hope he gets tortured every day of his life.”

The man rushed to his daughter’s school after getting a call about the sickening attack, he said.

“It was one of the worst phone calls you could ever get and one of the hardest things to deal with,” the girls’ father told the station. “We’re going to get through it. It’s just tough, it really is, but my main goal is to try to make her better.”

A North Carolina man used a translator app on his cellphone to tell a 15-year-old girl he just raped that she was pretty, according to reports.

“It could have gone a lot of different ways, but luckily, the sheriff got him before I did,” he told WRAL. “I hope he gets life in prison, and I hope he gets tortured every day of his life.”

If this piece of shit gets out on bail because of some Soros non-profit then lets hope that when he goes missing no one looks too hard.

This is not googles fault. Is it Colts fault when the White trash pos walks into a theater and starts blowing away innocent people with a large capacity magazine in his AR15

You make a good point. And ( sigh ) I once again repeat myself. We already have more than enough home grown monsters to sort out; so why would anyone with a speck of sanity, wish to import more?

If the illegal invader hadn’t been in this country to begin with then this girl wouldn’t have been raped by him. You do miss the point quite frequently, don’t you?

I was addressing the part of the op which I took issue with. Would you care to address what I said???

Let’s stick to the facts Monte. Did the rapist use Google Translate to torment his rape victim? Yes or no.

Yes he did of course. But to insinuate that google bears any responsibility is ridiculous.

What does it matter? This scumbag abducted and raped a 15 year old girl, used a fucking phone translator to tell her she was pretty, then dropped her off at school. Notice you don’t give two fucks about the child who got raped but about some service provided by some faggoty company that this piece of shit used to further denigrate the child he just fucked. What is your fucking problem? Like stories about kids getting fucked sicko?

That’s what you’ve got is personal attacks and insults… Thats apropos to the average Trump supporter. I oppose google being blamed for this just because you guys don’t like google. Blame the perpetrator and leave google out of it.

What are your thoughts on the little girl getting raped by this illegal tho?

What are your thoughts on the alleged rape of this 15 year old young lady? To me it seems prudent that the legal system run its course. At the moment we have a suspect and allegations.

So now you’re saying that the rape didn’t happen?

I don’t know, neither do you. The op link says this…

The point is is you seem to be victim blaming a 15-year old victim of rape and defending the rapist. Pretty gross.

We have an alleged crime and a suspect. What did I blame on the student?

I came into this thread to defend google, not the suspect. Perhaps you should read my first two posts, hmmmm?

Do you think that Google is incapable of defending themselves?

If someone attempts to sue google because of an alleged use of their services to commit a crime, I’m satisfied that they can defend themselves. I doubt however that they’ll be coming into this small social media forum to address anything.

The news stories don’t say if he is an illegal or not.

That is part ofMontes MO. No sympathy for the victims or families .