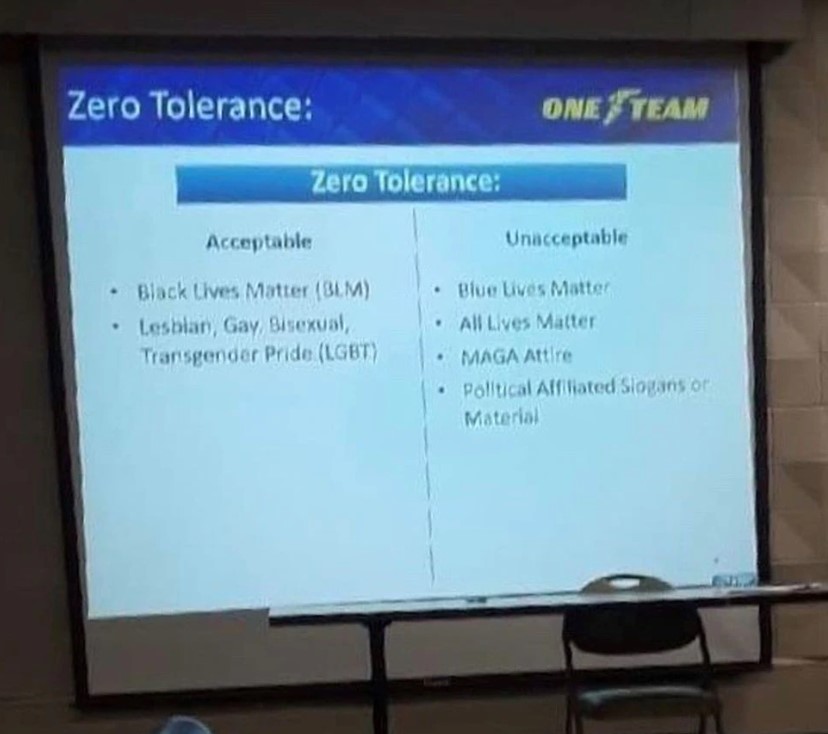 TOPEKA, Kan. (WIBW) - A Goodyear employee says the company has put out a new policy that has some calling it not equal for all.

A photo seen circulating on social media shows a slide that was presented during a diversity training showing what’s acceptable and what isn’t acceptable as part of Goodyear Tire and Rubber Company’s zero-tolerance policy.

According to the employee who took the photo of the slide, it was presented at the Topeka plant by an area manager and says the slide came from their corporate office out of Akron, Ohio.

“If someone wants to wear a BLM shirt in here, then cool. I’m not going to get offended about it. But at the same time, if someone’s not going to be able to wear something that is politically based, even in the farthest stretch of the imagination, that’s discriminatory,” said the employee under the agreement of anonymity due to fears they could lose their job. “If we’re talking about equality, then it needs to be equality. If not, it’s discrimination.”

13 NEWS has reached out to Goodyear about the slide. They did not answer questions when asked if the slide was part of a training from their main office.

“Goodyear is committed to fostering an inclusive and respectful workplace where all of our associates can do their best in a spirit of teamwork. As part of this commitment, we do allow our associates to express their support on racial injustice and other equity issues but ask that they refrain from workplace expressions, verbal or otherwise, in support of political campaigning for any candidate or political party as well as other similar forms of advocacy that fall outside the scope of equity issues.” 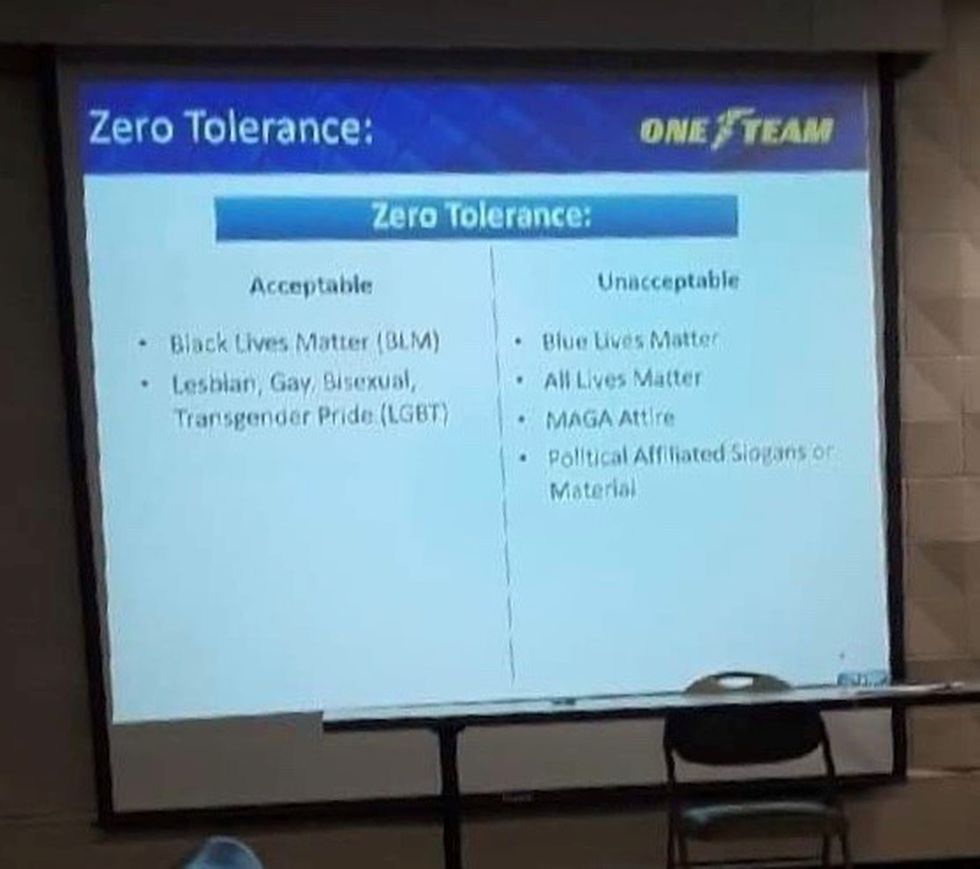 Goodyear responds to zero-tolerance policy slide labeled by employee as...

Goodyear employees say the company has put out a new policy that has some calling it not equal for all.

It’s very weird.
Detroit lost its popularity (even among Americans) because of its declining quality back in 1960s and 1970s.

Why did its quality go down the drain?
Political correctness.
Sure sounds like Boeing.

This was bound to happen.
Boycott Goodyear 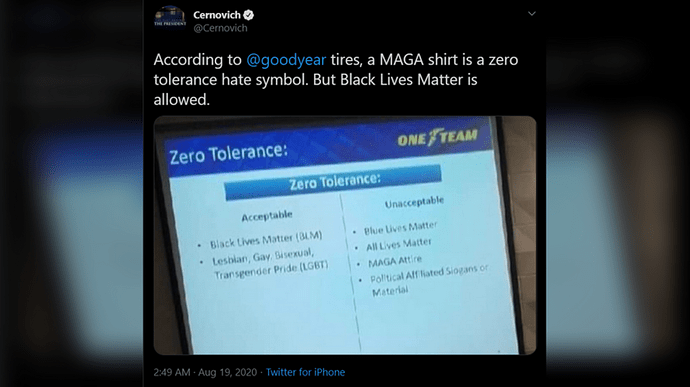 Calls for boycott after Goodyear’s ‘zero-tolerance policy’ allows staff to...

Goodyear has been pelted with social media tomatoes after an employee revealed that the tire company had introduced a new dress code that endorses Black Lives Matter merch but prohibits MAGA attire.

Goodyear is headquartered in Akron Ohio and Detroit has nothing to do with it! At least get your information straight!

Why not a statement directly from Goodyear CEO Richard Kramer instead of some company spokeswoman.

What say you Richard?

Yeah this is messed up for a company that was founded and had been around since 1898. I suspect it’s similar to the Red Bull racing recent situation where the owner fired a few American executives for pushing this SJW crap! I hope the blowback is tenfold as I and every one else are tired of the soy-boys, ruining every industry.

Who is the big moron?
“Detroit” is a way of saying the American auto industry.

Detroit lost its popularity (even among Americans) because of its declining quality back in 1960s and 1970s.

You are the big moron! The story is about Goodyear not Detroit or the automotive industry! Do try reading before you post, for not doing so only reinforces the perception around here of the habits you are known for which is not saying much just more attempts by you to “Digisplain” for self edifying purposes!

“Detroit” is a way of saying the American auto industry.

Which has nothing to do with the thesis of the OP. Do you have a reading comprehension problem that prevents you from discussing such topics? Or do you just post irrelevant responses to hear yourself talk?

Political correctness (meaning hiring minorities no matter what their skill levels) destroyed the American automotive industry as well as Boeing.
Goodyear is treading the same path, so to speak.
Get a grip, moron.

It’s very weird.
Detroit lost its popularity (even among Americans) because of its declining quality back in 1960s and 1970s.

This is what you said you stupid retard! Learn to post instead of inserting irrelevant topics! 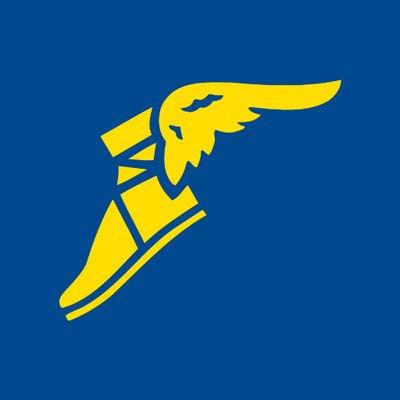 Yesterday, Goodyear became the focus of a conversation that created some misconceptions about our policies and our company. Goodyear has always wholeheartedly supported both equality and law enforcement and will continue to do so. https://t.co/oO6jUg2rTR 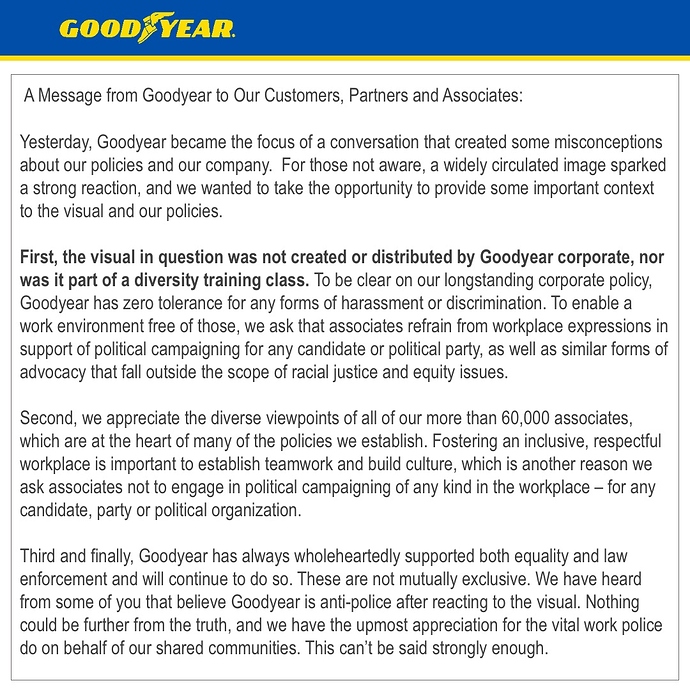 Detroit lost its popularity (even among Americans) because of its declining quality back in 1960s and 1970s.

This is what you said you stupid retard! Learn to post instead of pasting articles without further elaboration which is what you do all the time!

I don’t even know what you’re blabbering out of your foul mouth. I stand by what I said.

Sure you do, they are your words! Claiming ignorance is your best trait! Not to mention a wanton need to digisplain every topic here! 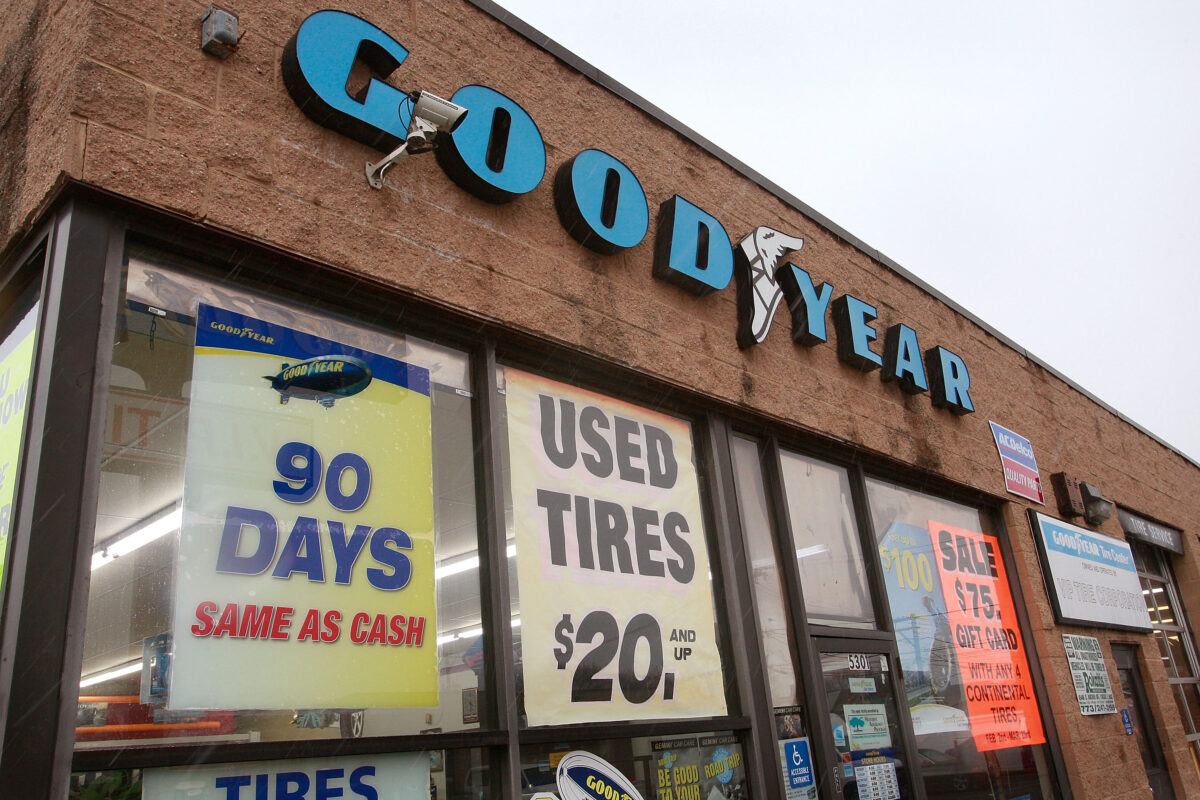 President Donald Trump on Wednesday called for a ban on Goodyear tires, pointing to an apparent ban the company has on employees wearing "MAGA" hats. 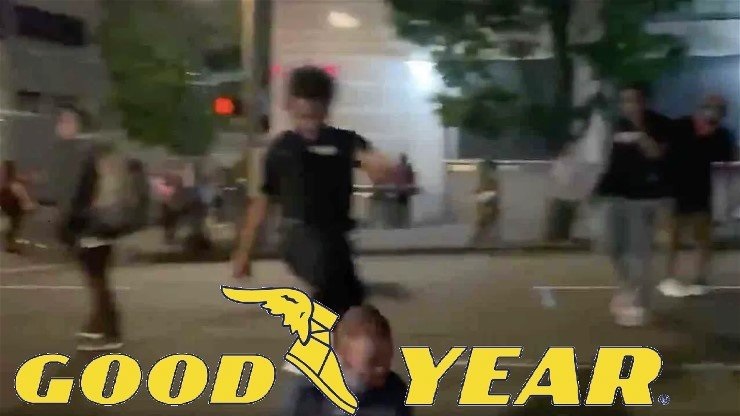 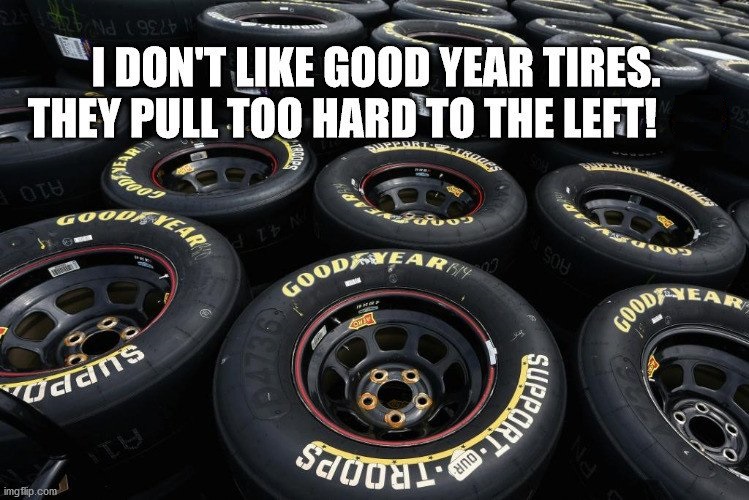 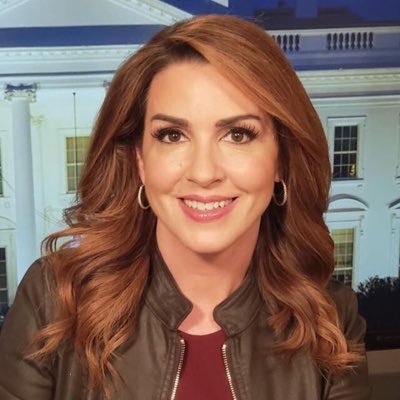 I hope the blowback is tenfold as I and every one else are tired of the soy-boys, ruining every industry.

Too late - no one called them out when they had the chance. Now they run everything and aren’t allowed to be criticized…well, at least their handlers do.