Go Fund Me For Border Wall

Apparently a Go Fund Me for the border wall has been started. https://www.gofundme.com/TheTrumpWall

It has raised a little over $7 million, which is a long way from the goal of $1 billion, but considering this was just over three days…I’m sure they’ll have enough in no time.

I was going to post this this morning and you just beat me to it now… It would seem that a newly minted Washington Post reporter has been trying to get the fund delisted and while the fund is still ticking along nicely from the 2.1m I saw this morning, GoFundMe has just removed it from the trending status it has held all day…

By the way… dems have started their own GoFundMe… For Ladders !!!

This is cancer. It’s time to stop. Remember when Trump said Mexico was going to pay for it lmao. Now retards are crowdfunding it on top of the taxes we already pay.

And how would you suggest border security be improved???

Technology? Great to let you know someone has already crossed and long gone before anyone can get there.

I wouldn’t donate money to this campaign. There is no way of knowing that this guy will actually do what he says. I know he’s a purple heart veteran and all that stuff but I wouldn’t be surprised if he ended up with a Lamborghini, a house, and a ton of cash for his kids.

And the money will be given back because they need government approval to build a damn wall.

Agreed. That thing won’t fund brick one (or artisnal slat one) of any wall except the one he buys to surround his new McMansion.

The Left is trying to doxx everyone who donates to the GoFundMe page for the Wall.

They think they can harass and shame the majority of Americans into silence. They keep lowering the bar for what it means to be a Nazi - now just wanting secure borders is all it takes. 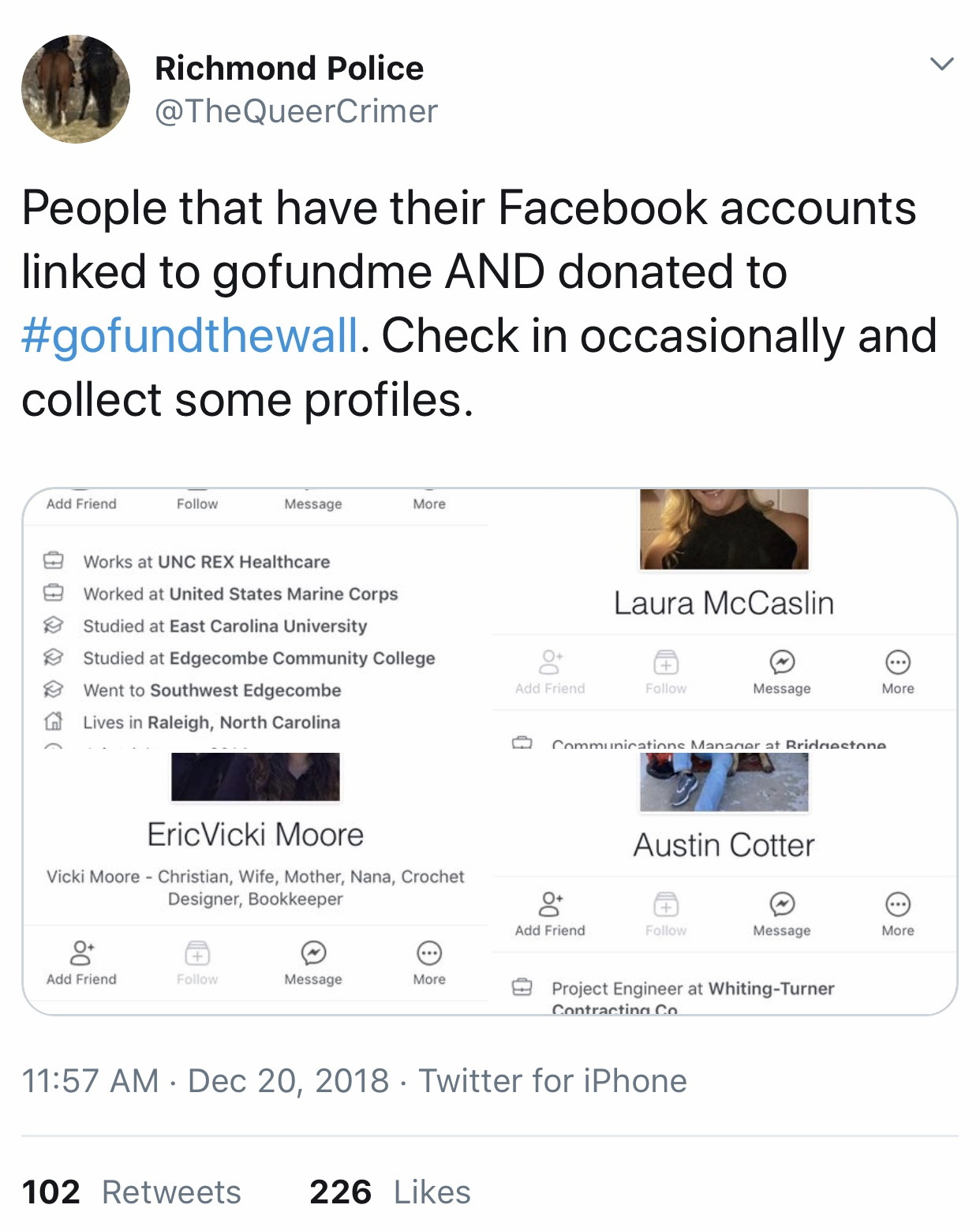 If he tries to keep the money for himself his next address will be the Graybar Motel. Electronic fraud, mail fraud, and he’ll be prosecuted under both state and federal law.

Some background for the haters and those who might be considering donating but are unsure.

Brian Kolfage is a combat veteran, triple amputee, founder and owner of “Military Grade Coffee Company”, and donates a portion of every sale to various veterans charities like the Wounded Warrior Project, DAV and others.

Blind hatred and ignorance are I suppose badges of honor for many in this country today.

No, he can donate it to either the BP or ICE directly.

It’s very easy to get Mexico to pay for it or for at least a large portion of it.

Simply put a tax on all remittances sent electronically to any non US citizen south of our border and/or deduct the amount spent by reducing foreign aid to those countries most responsible for the problem.

I don’t know… you see this kind of civic response to more local problems and you can see it in a big way when government refuses to deliver on citizens concerns. I certainly haven’t seen it on a national level except of course for things like the Vietnam War Memorial and restoration of the Statue of Liberty. People recognize the need for a physical barrier on that border and are apparently willing to put their own money down to prompt a fix that a rather subverted government is not willing to do. Electronic fixes are fine except that they can be turned off. We wouldn’t have the scale of the problem that we have today had a hard barrier been in place for both Bush and Obama… and the only way a president ‘open the gates’ is to publicly destroy the wall or refuse to go after the people who would willfully destroy it.

Electronic will be part of the solution for sure.

There isn’t any one thing that’s going to solve the problem, it will take a combination of physical barriers, electronic monitoring/surveillance, more personnel, and rapid response capability.

The argument that “Walls Don’t Work” is simply a lie or we wouldn’t put them around most everything else we want to secure from schools to prisons to the WH itself.

Israel’s border wall with Egypt dropped their illegal crossings by 99% in the first year.

The walls they’ve put up around the areas claimed and occupied by the “Palestinians” reduced terrorist attacks by over 90% the first year and by about 99% overall.

We know they work which is why democrats oppose them.

This GoFundMe Campaign is relentless. It was around $5M yesterday afternoon. It’s now over $11M this morning. 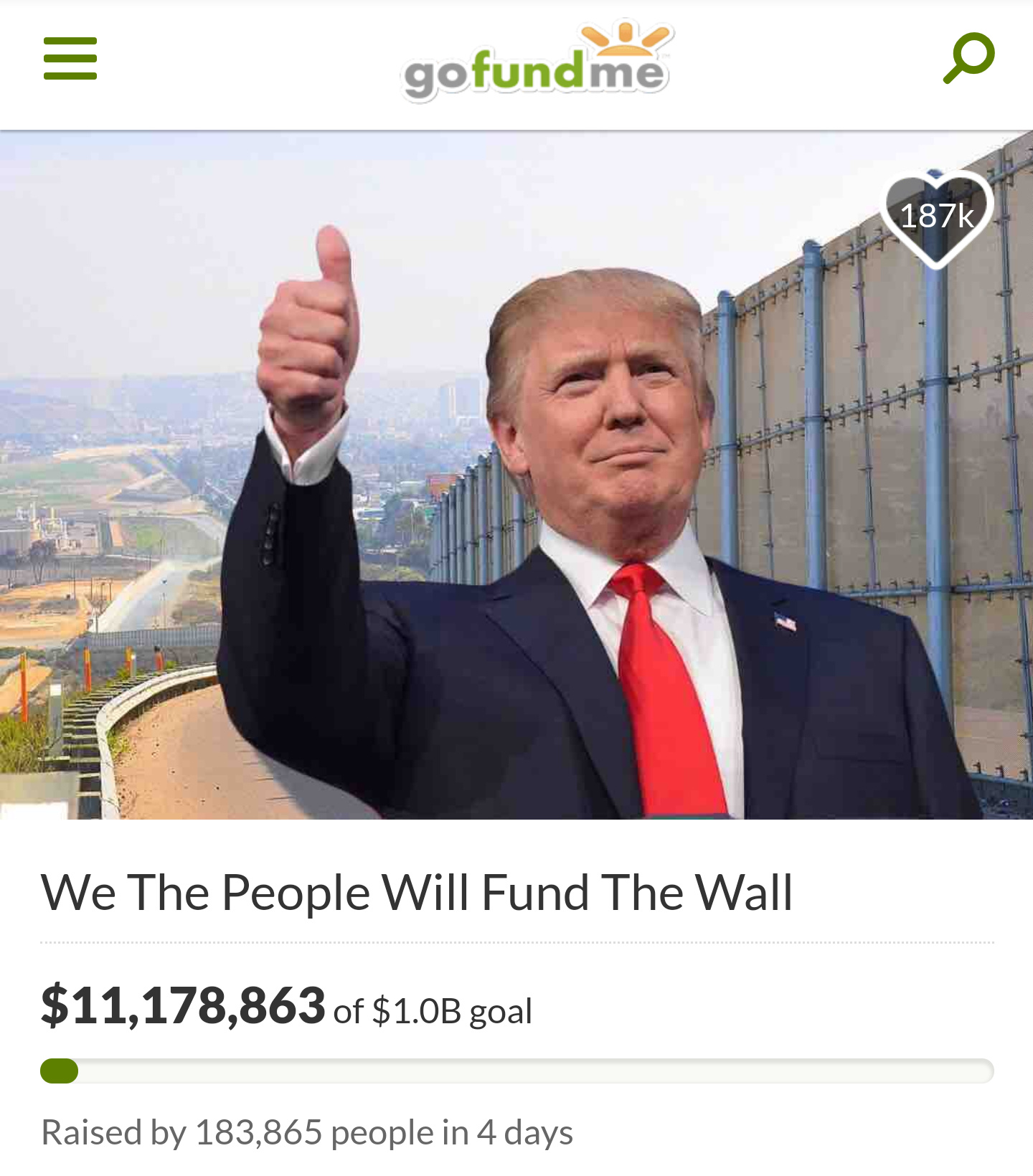 Look at the screenshot above your post from an hour ago. It’s at $11M.

Will the gofundme wall extend the entire length of the US-Mexico border, or just cover the most heavily used crossing points? Because Trump has never been clear on that.

This 1 billion dollars from GoFundMe, if this guy is able to actually reach the goal, will only cover about a third of the US border. I believe the grand total to go from coast to coast is closer to 10 billion - the price goes up around large bodies of water.

Is an actual 2,000 mile long physical wall across that varied topography feasible/practical? I’m no civil engineer so I’m asking.