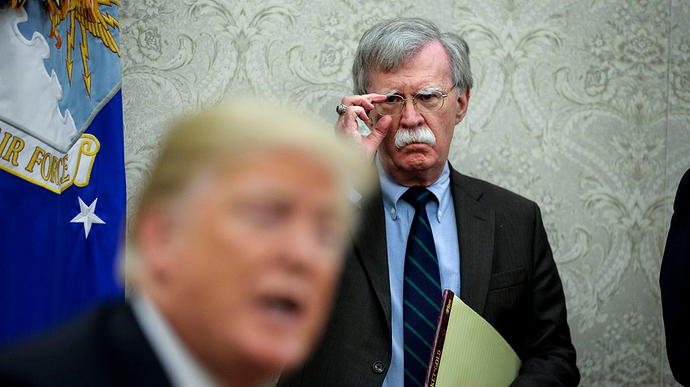 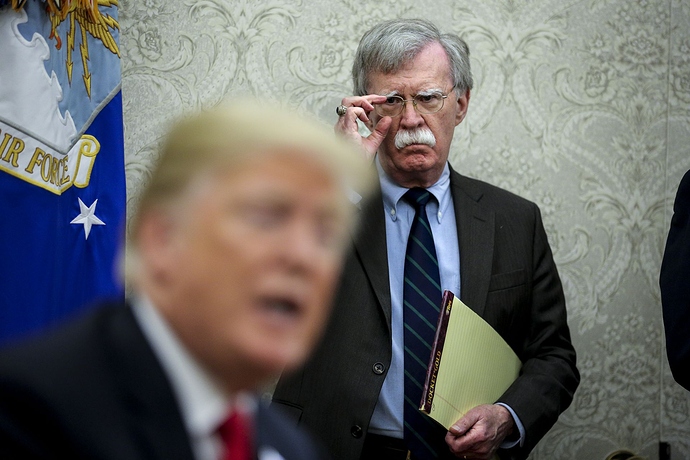 Pretty sure we are going at the request of some Arab countries. Maybe you should read more.

So you would sit back and watch Iran toast the middle east and kill millions of people???

Israel sits on nuclear weapons and if Iran were stupid enough to attack, they would certainly defend themselves. Ready for a retaliation by Israel? They would certainly hit all their favorite places including the terrorist next door.

Didn’t Obama and the CHIN hand over billions of US tax dollars for Iran to act nice and play fair ??? Where is Mueller and HIS Logan Act now ??? 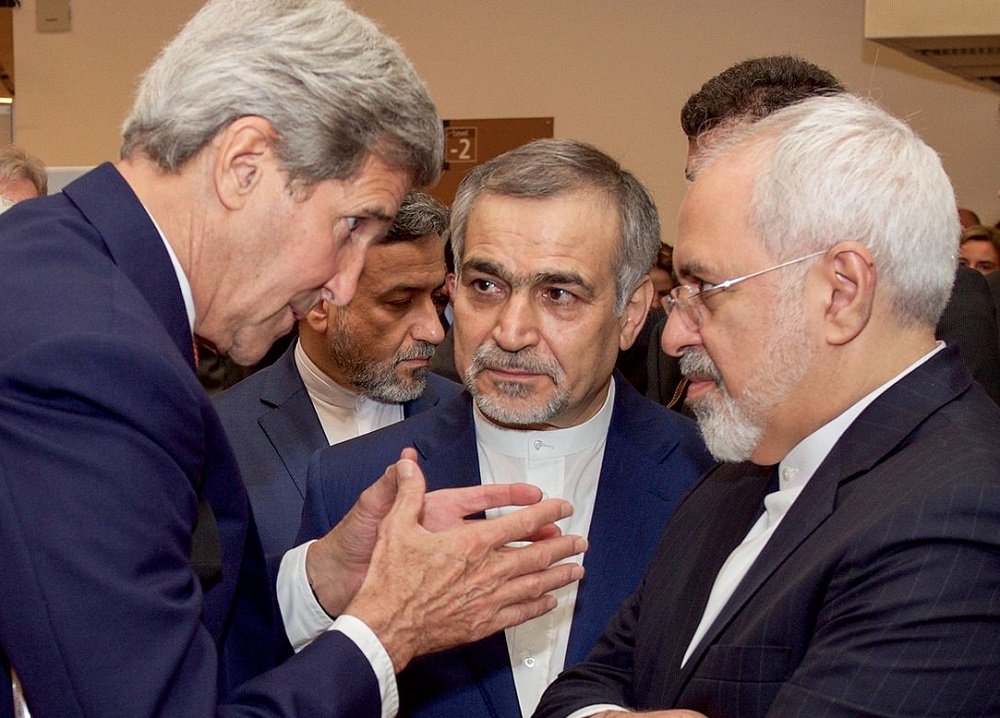 Somewhere in excess of 165 Bn Dollars.

What a load. Learn something about the region before spouting ■■■ hating bullshit for a change.

Says the guy who presents himself by displaying a picture of an American flag being overtaken by an Israeli flag.

Try harder to refute my post instead of shilling your pro-Israel bullshit.

Learn something about the region

Netanyahu Says He Plans To Annex Settlements In West Bank

We must control our destiny,” the premier said.

‘’’After boasting that he was responsible for U.S. President Donald Trump’s declaration recognizing Israeli sovereignty over the Golan Heights, Netanyahu told the program “Meet the Press”: “Will we move ahead to the next stage? Yes.’’’ 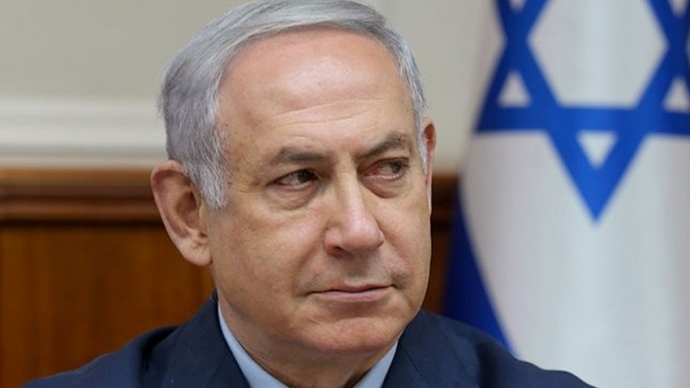 Netanyahu Says He Plans To Annex Settlements In West Bank

Israel and the U.S. are simultaneously stepping up repression in the form of travel restrictions against critics of the apartheid state.

‘’’Last week, the U.S. banned a founder of the Boycott, Divestment and Sanctions movement, one Omar Barghouti, from entering its soil.’’’ 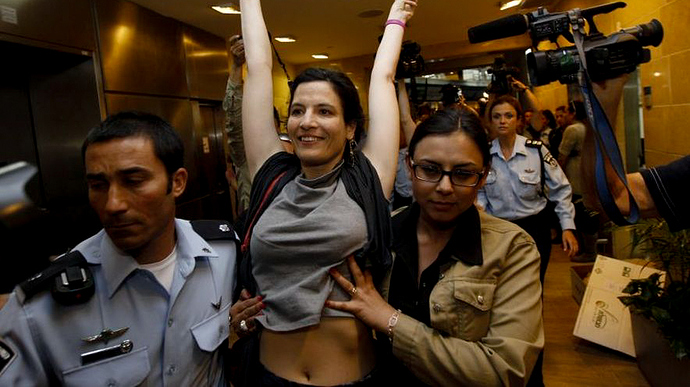 Israel and the US are simultaneously stepping up repression in the form of travel restrictions against their critics.

‘’’The Israeli government gloated after Instagram’s ban of the top Iranian officials.’’’

Instagram acts as arm of US govt, bans top Iranian officials after IRGC...

Top Iranian government officials have been suspended from Facebook-owned Instagram after Trump dubbed the IRGC a "terrorist" organization.

Rand Paul to Mike Pompeo: You don’t have Congress’ “permission” to go to war with Iran

Amid escalating tensions between the United States and Iran, Sen. Rand Paul, R-Kentucky, pressed Secretary of State Mike Pompeo on whether the administration’s recent decision to designate Iran’s Islamic Revolutionary Guard Corps as a terrorist organization was a way to justify possible future military action in Iran.

In light of the resolution, Pompeo later testified that the connection between Iran and Al Qaeda was undeniable.

‘’’There is no question there is a connection between the Islamic republic of Iran and AL Qaeda. Full stop," said Pompeo, noting that the IRGC has “killed 600 Americans.”’ 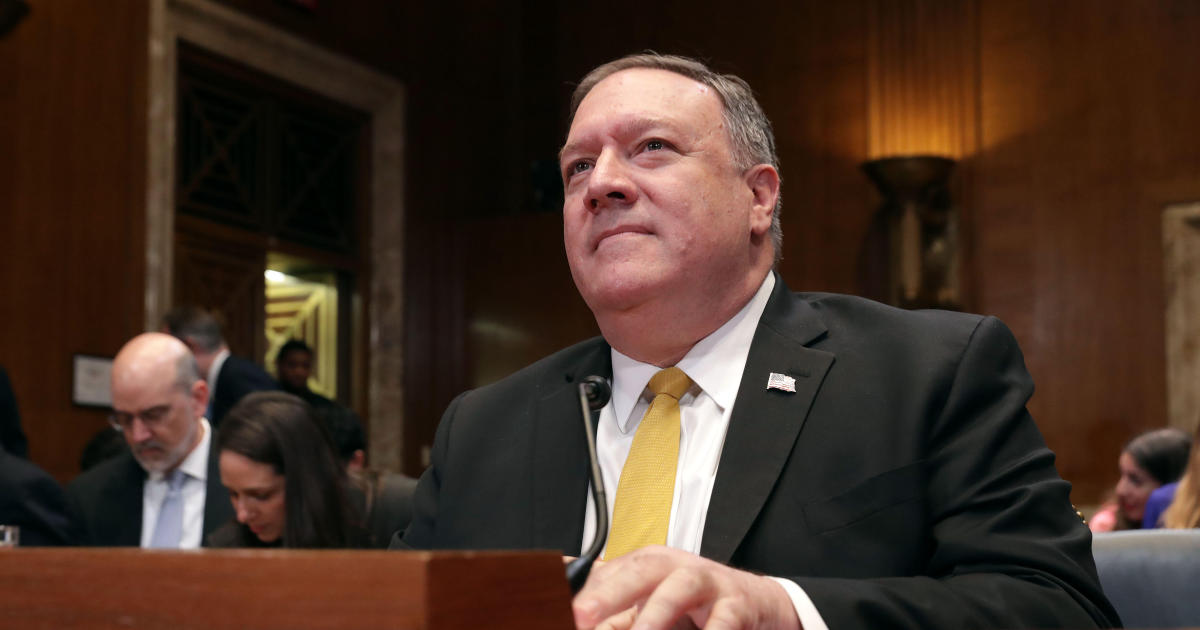 Rand Paul to Mike Pompeo: You don't have Congress' "permission" to go to war...

"Only congress can declare war. You do not have our permission to go to war with Iran," Paul warned the secretary

Leaked Netanyahu Tape: We Made Trump Cancel The Iran Deal 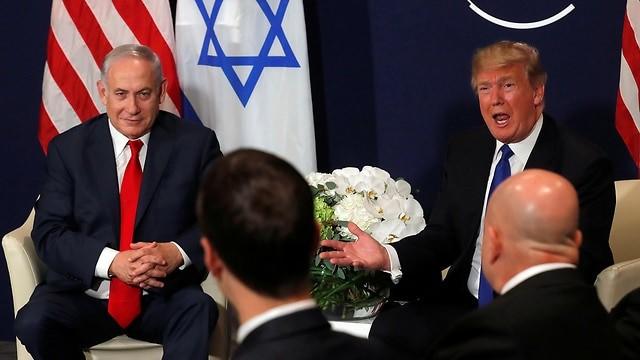 Leaked Netanyahu Tape: We Made Trump Cancel The Iran Deal

Obvious signs that a false flag is being setup:

US And Israel Form “Working Group” To Overthrow Iran Government

We knew in advanced that this was planned 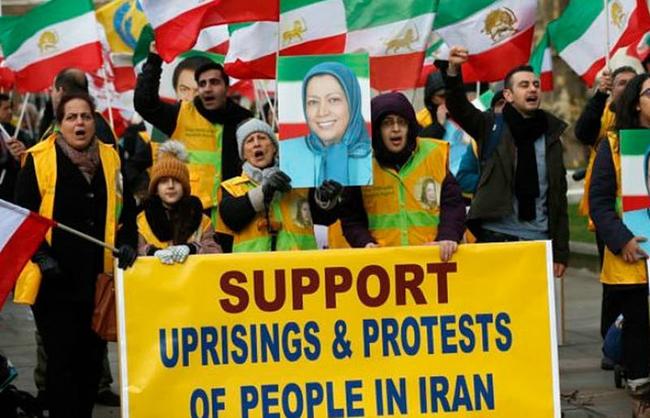 US And Israel Form "Working Group" To Overthrow Iran Government

Meanwhile back at home…

Official Reveals 168,000 Illegal Immigrants Have Been Released into US Communities This Year 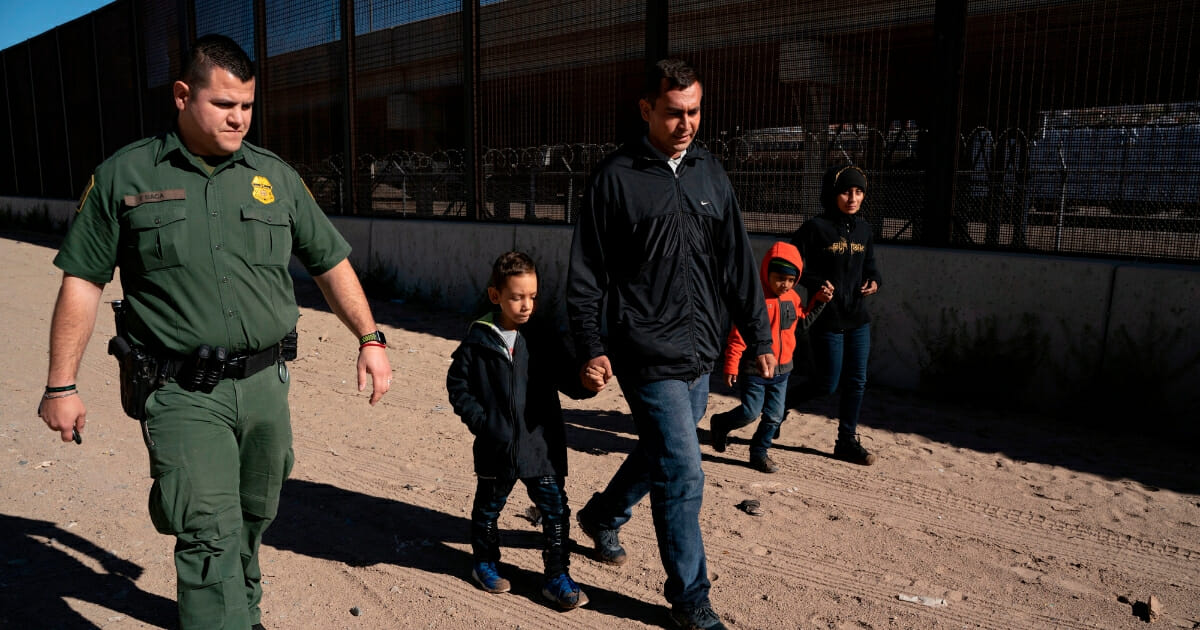 Official Reveals 168,000 Illegal Immigrants Have Been Released into US...

Two of America’s top officials trying to hold the line along America’s southern border on Wednesday painted a dismal picture of a rapidly deteriorating system being overwhelmed by unprecedented illegal immigration from Central America to the United...

The US peace deal for the Middle East includes establishing Israeli law over the ■■■■■■ settlements in the occupied West Bank, an Israeli TV channel has reported. The condition has been a no-go for Palestine.

More than two years in the making and bogged down by delays, the Trump administration’s “peace deal” for Israel and Palestine is finally expected to be unveiled next month. With that day approaching, parts of the draft, shrouded in a thick veil of secrecy, have been leaked to media, confirming the general expectations of it being heavily skewed in Israel’s favor. 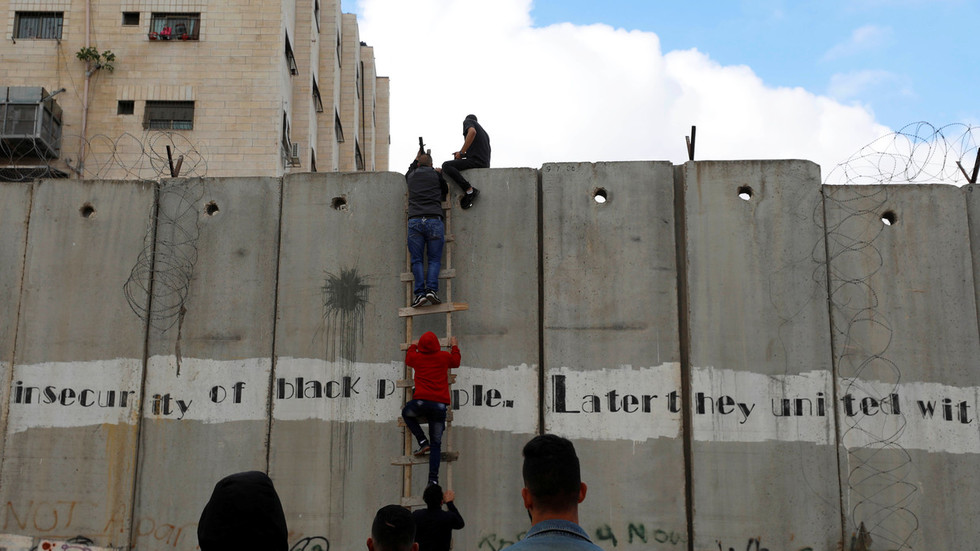 Trump's 'deal of the century' will give Israel control over West Bank...

The US peace deal for the Middle East includes establishing Israeli law over the Jewish settlements in the occupied West Bank, an Israeli TV channel has reported. The condition has been a no-go for Palestine.

So, Trump pulls out of Syria, recognizes Israel’s sovereignty over the Golan Heights, moves the embassy to Jerusalem and now Israel gets Syria’s oil and is moving ■■■■■■ settlements into the West Bank.

At the same time, Israel and the US are banning BDS members.

Meanwhile Trump declares Iran’s Revolutionary Guard a terrorist organization, Pompeo is making connections between Al Qaeda and Iran, and social media is censoring the issue on behalf of the US gov’t.

At the same time, Qresearch constantly posts photos at top of board demonstrating support for overthrow of Iran.

Trump is doing what we voted him into office to do.

I’m a Trump supporter and Trump voter. We did not vote him into office to get involved in more foreign wars. That was a big part of his campaign, if you recall.

Iran has been killing Americans for more than 40 years, what’s new is the US actually doing something about it.

We backed out of Obama’s idiotic nuclear deal because all it did was give Iran a decade and hundreds of billions of dollars to develop their nuclear program in peace without further sanctions.

A couple of sentences is all it takes.

Iran has been expanding it’s influence throughout the gulf since 2009. They are directly responsible for over 70% of our casualties in Iraq and Afghanistan having provided the materials and training along with direct support for the insurgents IED’s.

Iran has taken control of Iraq and much of Syria now as well.

If we don’t stabilize things there in the region we’re soon going to see a new ME oil crisis and closure of the straits of Hormuz along with an allout war between Iran and the Saudis.

The end result would be to overnight crash the economies of all the western powers including our own putting the world into a deep recession that would take years to recover from.

Like I said, learn something for a change before spouting your ignrant anti Israel Bullshit.

I’m a Trump supporter and Trump voter. We did not vote him into office to get involved in more foreign wars. That was a big part of his campaign, if you recall.

You conflate his action regarding Iran with those regarding Israel. Your post makes no sense. I support our alliance with Israel. Our nation supports it too.

Stop believing the lies about Israel being the cause of every problem.

Well Trump would NEVER allow our soldiers to kneel to some F-ing terrorist pigs and never order them to stand down . Obama was a disgrace to all our brave military and to our Country . The worst 8 years in American history he weaponize the DOJ , FBI ,CIA and the IRS !

I think you are grossly overstating Iran’s threat to the US. The sequence of events that @skull laid out above is accurate. To me this appears like Bolton, is being his usual hawkish self, and we are potentially about to get into yet another conflict in the Middle East over issues that have absolutely no impact on US citizens.

Again, we didn’t elect Trump into office for this. When Trump first appointed Bolton he joked about him not starting any new wars on his watch. It’s not like it’s a secret that Bolton likes to start wars.

I agree with Trump pulling out of the Iran deal because it was half baked and completely lop sided in favor of Iran.

I don’t agree with getting into a conflict with Iran over issues that will unilaterally benefit Israel if they are brought to bear.

That doesn’t make me an anti-semite or anti-Trumper. We are allowed to disagree with the president, especially when he’s doing something that he campaigned that he wouldn’t do. Trump campaigned to put America first.

Why have all of you forgotten about that? If all of you were actually Trump supporters from the beginning this would piss you off.

This is because those of us who supported Trump when he came down the escalator aren’t getting the same Trump that we backed (at the expense of many personal relationships) and got shit all over by establishment conservatives. Trump has gone full establishment and is surrounded by Bush-era neocons. That’s why these people won’t question Trump now…and have the gall to talk shit about us when we get pissed that Trump moved away from the principles of putting America first.

Trump moved away from the principles of putting America first.

I don’t think Trump has lost sight at all of putting America first which includes all matters that may adversely affect this country happening overseas.

He also has a hell of a lot of more information at this fingertips than you or I have.

Agree on access to info. Trump has the Situation Room where everyone comes to brief him on everything. We have the MSM and alternative news.

It would be nice to see how going to war with Iran, something that Bolton has wanted for decades, somehow helps the average American and puts America first. If someone here could explain it I’d be glad to listen.

You have the answer here…

Trump has gone full establishment and is surrounded by Bush-era neocons. That’s why these people won’t question Trump now…and have the gall to talk shit about us when we get pissed that Trump moved away from the principles of putting America first.

As long as Trump keeps putting Israel first, shills and cuckservatives like @TWR will be happy.

The rest of us who actually put Trump into office will continue to be pissed while cuckservatives and neocons continue to sell out America to the lowest bidder…while they jump up and down waving the Israeli flag like the cucks they are. They are probably disgusted to even handle an American flag. Traitors.

I’m not so sure this is about what Bolton has wanted for decades rather the threat that Iran may pose.

U.S. President Donald Trump also has increased economic pressure on Iran, moving to cut off all its oil exports, to try to get Tehran to curb its nuclear and missile programs as well as end support for proxies in Syria, Iraq, Lebanon and Yemen.

“In the event that Iran decided to come after an American interest - whether that be in Iraq or Afghanistan or Yemen or any place in the Middle East - we are prepared to respond in an appropriate way,” he said, adding that “our aim is not war.” https://taskandpurpose.com/iran-command-us-military-persian-gulf-target-threat

So, we shall see what evolves. In the meantime, I do believe Trump is putting the interests of America first