Why do democrats want to benefit from covid19 politically in every aspect?

California this week declared its independence from the federal government’s feeble efforts to fight Covid-19 — and perhaps from a bit more. The consequences for the fight against the pandemic are almost certainly positive. The implications for the brewing civil war between Trumpism and America’s budding 21st-century majority, embodied by California’s multiracial liberal electorate, are less clear.

Speaking on MSNBC, Governor Gavin Newsom said that he would use the bulk purchasing power of California “as a nation-state” to acquire the hospital supplies that the federal government has failed to provide. If all goes according to plan, Newsom said, California might even “export some of those supplies to states in need.”

Newsom is accomplishing a few things here, with what can only be a deliberate lack of subtlety. First and foremost, he is trying to relieve the shortage of personal protective equipment — a crisis the White House has proved incapable of remedying. Details are a little fuzzy, but Newsom, according to news reports, has organized multiple suppliers to deliver roughly 200 million masks monthly.

Second, Newsom is kicking sand in the face of President Donald Trump after Newsom’s previous flattery — the coin of the White House realm — failed to produce results. If Trump can’t manage to deliver supplies, there’s no point in Newsom continuing the charade.

Third, and this may be the most enduring effect, Newsom is sending a powerful message to both political parties. So far, the Republican Party’s war on democratic values, institutions and laws has been a largely one-sided affair, with the GOP assaulting and the Democratic Party defending. The lethal ruling this week by the U.S. Supreme Court’s Republican bloc, which required Wisconsin residents to vote in person during a pandemic that shut down polling stations, is a preview of the fall campaign. The GOP intends to restrict vote-by-mail and other legitimate enfranchisement to suppress turnout amid fear, uncertainty and disease.

At some point this civil war by other means, with the goal of enshrining GOP minority rule, will provoke a Democratic counteroffensive. Newsom, leader of the nation’s largest state, is perhaps accelerating that response, shaking Democrats out of denial and putting Republicans on notice. California, an economic behemoth whose taxpayers account for 15% of individual contributions to the U.S. Treasury, is now toning up at muscle beach.

What that means, of course, is left to the imagination. But not much is required to envision what might evolve.

Newsom, a former lieutenant governor who won the top job in 2018, has used the “nation-state” phrase before. It’s a very odd thing to say. California, like its 49 smaller siblings, qualifies only as the second half. But it’s obviously no slip of the tongue. Democratic state Senator Scott Wiener, a leader in California’s cumbersome efforts to produce more housing, said soon after Newsom took office in 2019 that reorienting the state’s relationship to Washington is a necessity, not a choice.

“The federal government is no longer a reliable partner in delivering health care, in supporting immigrants, supporting LGBT people, in protecting the environment, so we need to forge our own path,” Wiener said. “We can do everything in our power to protect our state, but we need a reliable federal partner. And right now we don’t have that.”

The statement appears prescient in light of the Trump administration’s failure to protect against a pandemic. Newsom was the first governor to issue a stay-at-home order, on March 19. Though his state is chock-full of cosmopolitan centers, and rural threats loom as well, California is weathering the virus in far better shape than New York, which has many fewer people and many more deaths.

Federalism has always had rough spots, but conflict is rising and resolutions are not. California is a sanctuary state while the Trump administration is fond of immigration dragnets. Marijuana is grown, marketed and used in abundance in the state while the White House conjures more restrictions. The Trump administration endorses extreme gun rights; California has other ideas. Most of all, Trump’s failure to act, or even take responsibility for acting, in the face of pandemic has required California, like other states, to look out for itself.

One conflict, however, encompasses all others, and could galvanize Californians into new ways of thinking about their state and its relationship to Washington. The GOP war on democracy is inspired by a drive for racial and cultural supremacy that jeopardizes the democratic aspirations and human rights of California’s multiracial citizenry.

From Fort Sumter to Little Rock to Montgomery, the blueprint for states opposing federal control has a recurring theme. But there is no reason that states can’t adopt a racist playbook for other ends. If California and other 21st-century polities withhold revenue, or otherwise distance themselves from Washington’s control, legal and political battles will escalate. Republicans will have a legitimate constitutional argument — but it will be a morally tainted and politically illegitimate one so long as they continue to subvert majority rule.

John C. Calhoun, who used the theory of states’ rights to defend the institution of slavery, is not generally a philosophical lodestar for liberal Democrats such as Newsom. But if Republicans (or foreign friends) succeed in sabotaging democracy in November, Calhoun’s theory of nullification, which posited that states have the power to defy federal law, could be ripe for a comeback on the left coast. With the heirs of the Confederacy now reigning in Washington, turnabout might be very fair play. 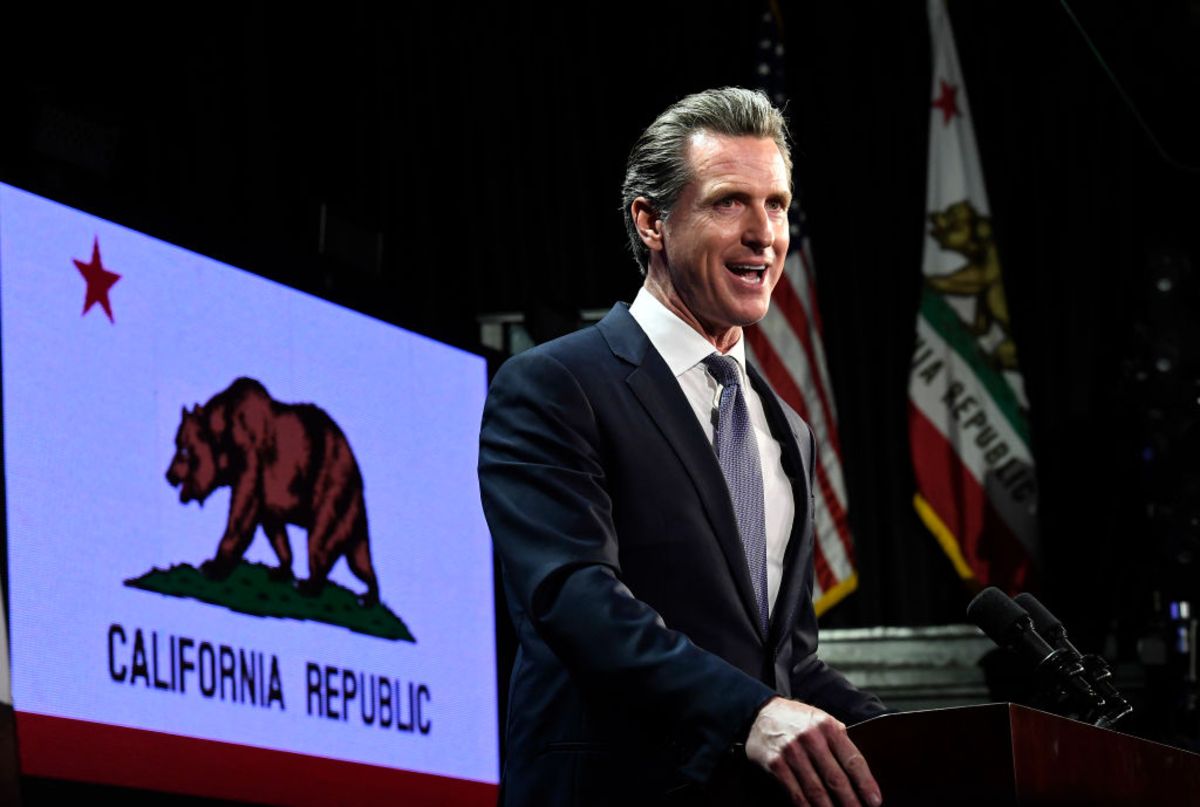 The state is at odds with the federal government over coronavirus plans and much else.

Cool! Let’s glass that taco infested shithole and call it a day!

Speaking on MSNBC, Governor Gavin Newsom said that he would use the bulk purchasing power of California “as a nation-state” to acquire the hospital supplies that the federal government has failed to provide. If all goes according to plan, Newsom said, California might even “export some of those supplies to states in need.”

Well, didn’t California want to become a “nation-state” and seperate from the rest of the U.S. ? So, let them…they can’t get any Federal aid and anything from the Federal Government, if they are no longer part of the USA. They would become a “nation of its own right”.

Meaning, California can do whatever they want within the boundaries of their “nation-state”. But if they ask for any Federal aid (in such of an event of any natural disaster - earthquake, and such). they will be refused.

They will also have to protect their own Southern border, if they don’t want any (stupid-ass) Illegals flowing across their “new nation”. The US will give up any “rights” to protect California from anything and anyone - since they are no longer part of the United States of America.

Gov Gavin will forget it in January 2021 when he begins to run for president. Will Kamala claw him down the totem pole? Stay tuned.

I think the entire west coast should slowly slip away from the U.S.
That would include Nevada, Washington, Oregon and Idaho. It’s not like they serve any purpose anyways - at least, not anymore.

Then make Gavin the President of the NWUSA (Newly Western United States).

Newsom is a class A-1 asshole - living as he does behind walls, guarded by armed guards 24/7 and with a high tech security system in place. He’d deny that for you in a heartbeat. He has the delusional privilege to declare California whatever he wants. That doesn’t make it so.

@thorpe Although, I don’t like either Governors - Andrew Cumo and Gavin Newsom. If I had to choose the latter - I would go with Cumo. At least, when he whines - unlike my Governor Whitmer - he whines for good reason. It may not be a (good) reason for everyone else. But at least, unlike Newsom - he whines because the Government is broken. And it has been for a very long time. JMO

California has been digging itself into a hole ever since the 80’s, when Mexicans and Squatemalens started arriving in huge numbers.

The people who turned California into a shithole are also fleeing the mess they made and they are doing the same BS in other states. Turning them into future California shitholes.

California is a joke. The state and city governments need to be disolved and the counties run by viceroys appointed by the federal government.

Republicans could foment this somehow, maybe by charging some local sheriffs or politicians with federal crimes, then sending in the FBI to arrest them and having it snowball into insurrection.

They want to be their own country, eh? This should generate a propaganda campaign to encourage ALL illegals - the more destitute the better - the more unknown the disease conditions, the better - to go to California specifically to financially drain the shitlibs.

California has been a joke ever since former Governor Arnold Schwarzenegger took ahold of the state. San Francisco used to be a beautiful city. Not it is drown in its own cesspool.

go to California specifically to financially drain the shitlibs.

I like to shame libs for locking their doors at night, and not letting the homeless live rent free in a spare room, or just use the toilet.

You will never hear anything about the homeless, as long as Newsom is Governor. Like he really cares what is happening to his cities - San Fran. ; Los Angeles, San Diego and even in Sacramento.
When was the last time we heard anything about them? You don’t think they could be carriers of the Coronavirus, as well? If not, people in state/Federal prisons?

That’s been happening. In Arizona they are (and have been) moving in like a plague of locusts and fucking up the program like a bat out of hell. They even managed to get that Marxist dyke Kyrsten Sinema elected and got Joe Arpaio to lose to a pro-illegal

I used to love traveling to California. I have been up and down along the majestic Pacific Highway. As well, as along the old Route 66 from Chicago.
Now, I really could care less if it sinks into the freakin’ ocean.

If not, people in state/Federal prisons?

That’s why he has been releasing prisoners like crazy. Because he cares so much about his people that the thought of leaving prisoners in prison, where they can effectively be quarantined, is just too much of a burden for him to bear.

I’m good with that, I fully believe in the right of self determination.

Tomorrow we should cut them off from all federal funding, all federal support, and move our military bases and other federal facilities out of the state as rapidly as possible.

With the savings we should just buy Baja Sonara which would be much better locations for them anyhow. We can kick out all the mexicans and send them to California and name the new state “New MexiFornia”.

All those Leftist western states should be their own country. They could tax the hell out of the people to provide " free healthcare for all", let in all illegals.provide for their defense, no election laws and completely green utilities .Bring in Al the Bore Gore as the CZAR of the Green Program.
We should build a border area similar to the old Iron Curtain to prevent them coming in to subvert the country.