John Kerry is a worthless goddamned traitor…as is his piece of shit former boss, Barack Hussein Obama. These bastards just don’t know when to let go.

They no longer hold the reins of this country and need to disappear into the sunset.

I will be happy to be able to piss on John Kerry’s grave. 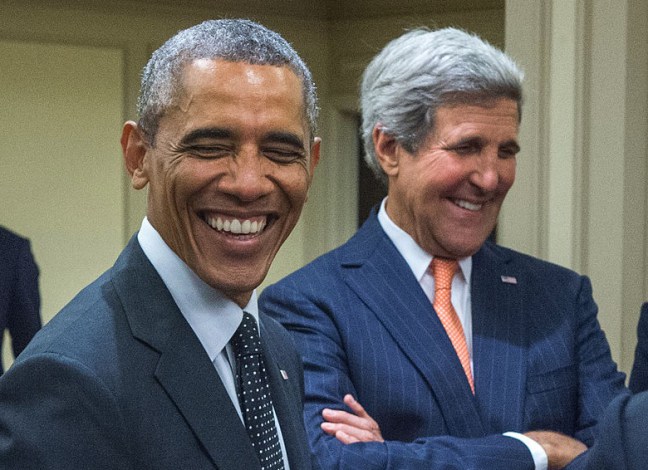 The sanctions are putting a great deal of pressure on Iran, and their people are rising in protest. However, Iran isn’t backing down militarily, possibly because they have support in the Democrat Party. Secretary of State Mike Pompeo addressed that...

In September 2018, Pompeo blasted the former Secretary of State John Kerry, for engaging in secret talks with Iran, undermining the administration.

He said he would leave “legal determinations to others” but slammed Kerry for engaging with “the world’s largest state-sponsor of terror” and telling Iran to “wait out this administration.”

The secretary of state harshly criticized Kerry for “actively undermining” U.S. policy on Iran by meeting several times recently with the Iranian foreign minister, his partner in the Iran nuclear deal.

Kerry met with high-level Iranian counterparts in May 2018.

They no longer hold the reins of this country and need to disappear into the sunset.

They no longer officially hold the reins of this country. They are still very much in charge and in control of the deep state.

They no longer officially hold the reins of this country.

Perhaps not, but encouraging Iran not to be impetuous until Trump’s gone makes sense.

Too little too late, like it or not Iran is about to get stomped on.

Iran is about to get stomped on.

The US couldn’t stomp the Islamic state, Afghanistan after 18 years or Syria. What’s the source of your arrogance?

These liberals have a major dilemma in a chaotic world - which enemy do we appease and comfort? To them, the only real enemy is Trump and the GOP.

I will be happy to be able to piss on John Kerry’s grave.

Perhaps not, but encouraging Iran not to be impetuous until Trump’s gone makes sense.

There is no perhaps, Donald J Trump is POTUS and he hasn’t appointed Kerry to any diplomatic post nor assigned him diplomatic duties. That makes Kerry a private citizen engaged in undercutting US foreign policy with a hostile foreign government. That ought to be condemned as unethical at the least but the Resistance has discarded any sense of ethics or indeed justice in their crusade to lynch President Trump.

Just a few weeks ago House Democrats hosted a parade of diplomatic bureaucrats whining about President Trump violating their definition of US foreign policy by delaying the distribution of US aid they felt entitled to treat as their personal piggy bank. House Democrats determined Trump’s failure to bow to these bureaucrats was such a grave offense he ought to impeached for it. Yet now, Obama’s former Secretary of state counsel’s a regime with an official policy of “death to America” to sabotage US diplomatic efforts out of partisan hatred and your response is to encourage him as a sensible approach. Every time it looks like hypocritical Resistance Democrats can go no more extremist they find a way to exceed their own blind zealotry.

The Trump administration has been at war with Iran imposing crippling sanctions on them. The US, from at least 1953, have been the aggressors.

In September 2018, Pompeo blasted the former Secretary of State John Kerry, for engaging in secret talks with Iran,

Sounds like a charge of collusion and associate charges are certainly warranted.

The US has allowed Iran to piss in your corn flakes as well as sending them monetary support.

There has been no effort to stop Irans aggressive movs in the middle east.

I am pretty sure Kerry violated the Logan Act! It gets pretty incestuous when elites get a pass from other elites nor get equal treatment under the law! It’s a pretty chummy club!

Collusion is not a crime. Treason is a crime…punishable by death.

Jesus - Mary - & Joseph; Islam has been the aggressor since the 7th century. A barbaric & pathetic cult, thinly veiled as a religion. Check your history books; the real ones, and not the ones revamped by Liberals.

I was referring to a sovereign state, not a religion…

islam is a demented theocracy disguised as a religion.

To hell with Islam!

Well hopefully Trump keeps his word and gets America the hell out of the ME. I’m not holding my breath on that though.

Islam goes hand in glove with Muslim countries. Where ya been?

If that has to be explained to you then you are truly hopeless.

You remind me of the Swedish women and girls holding up signs to the third worlders welcoming them.

It is fortunate for you that you are still protected by people who know better.