Border Patrol officials have temporarily stopped processing apprehended migrants at the agency’s largest detention center, in the South Texas city of McAllen, after detainees there showed signs of a flu-related illness .

The halt was ordered late Tuesday, a day after the death of a 16-year-old Guatemalan boy who was sick with the flu and had been in custody at the center.

On Tuesday, medical staff at the facility — known as the Centralized Processing Center or Ursula, from its address on Ursula Avenue — identified a large number of migrants with high fevers and flu-related symptoms. Officials decided to temporarily suspend all intake procedures for migrants to “avoid the spread of illness,” the Border Patrol’s parent agency, Customs and Border Protection, said in a statement.

The Centralized Processing Center remains in operation, but it is no longer receiving new migrants, officials said. Migrants apprehended in the area are now being processed at other locations.

The move has raised new questions and controversy over the conditions and the medical care in Border Patrol facilities , as the agency scrambles to handle a surge of migrants arriving from Guatemala, Honduras and El Salvador.

It seems that “diseases” are the only things fighting the colored plague that seeks to destroy us.

When one joins our team in America, why fight it? Why should our people fight for the enemy?

Let the flu have these legummanoids. Let Ebola-Chan have all of Africa.

Don’t contain it. Don’t fight it. Let it cleanse our planet.

Officials have been struggling to house and care for a flood of Central American families, most of whom turn themselves in after crossing the border illegally . Hundreds of migrant families are apprehended daily, and even hourly in some border regions. Agents in South Texas apprehended more than 400 migrants in several groups one recent morning.
The fact that they willingly turn themselves in shows you that exploiting the “asylum” thing is more profitable for them than sneaking in.

It’s all about accessing the free stuff. While “detained,” they get free medical care, free food, free housing and once they’re released, a charity will continue to give them free stuff and will help them “establish” themselves.

In the busiest Border Patrol sector — the Rio Grande Valley Sector, which includes McAllen — the holding capacity of the agency’s facilities is 3,363 detained migrants, but more than 8,000 were in custody last week .

The Border Patrol opened a temporary tent city in Donna, a town near McAllen, and has built four more tent structures outside two Border Patrol stations in South Texas. 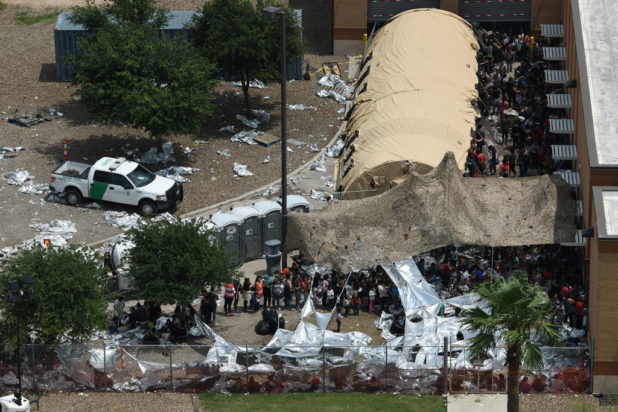 The Walking Dead? No, Central American enrichment in the U.S.

Images of migrants sitting on the concrete pavement and grass outside Border Patrol buildings in recent days have outraged immigrant advocates and Democratic lawmakers. For months, they have complained that the conditions at the detention centers and tent cities are callous and unhealthy .
Of course. Invaders should be feeling comfortable while they invade us. We have to ensure the safety of the invaders thorough the whole invasion. They can’t get hurt or die, otherwise we’d be violating their human right to take our stuff.
Many migrants are ill when they are apprehended, or become ill after being housed at Ursula. The McAllen detention center, which opened in 2014, is effectively a giant warehouse of corrugated steel, with groups of migrants held in chain-link cages. Migrants refer to it as “La Hielera” — the cooler or the icebox — because of its frigid temperatures. Border Patrol officials said ill migrants apprehended in the Rio Grande Valley Sector are frequently taken to local hospitals, with the sector averaging 20 hospital visits per day.

Christopher Cabrera, a vice president of the local union of Border Patrol agents in the Rio Grande Valley, spoke in an interview in April about the disease and illness in the building.

“ The majority of our agents get sick ,” said Mr. Cabrera, who has been a Border Patrol agent for 17 years. “Infectious disease is everywhere. There’s always scabies in there. Usually we have chickenpox. We have tuberculosis in there. You name it, it’s probably been through that building.”

Agents are not getting sick, silly — they’re getting enriched with the best these brave migrants have to offer.

The White House has requested $4.5 billion in emergency funds for the southwest border, including nearly $3 billion for the Department of Health and Human Services to care for unaccompanied minors . Mr. McAleenan said at the hearing that the funds would help prevent deaths of children in federal custody.
The White House is requesting $3 billion to give medical treatment to this invading army?

Why not use those billions to build a border wall to stop the emergency instead?

Remember that this isn’t a matter of not having the money to build the wall. It’s a matter of traitors wanting us to burn that money trying to accommodate a never-ending influx of foreigners.

It’s amazing how building a defensive structure that people have been building for millennia is suddenly a controversial matter. 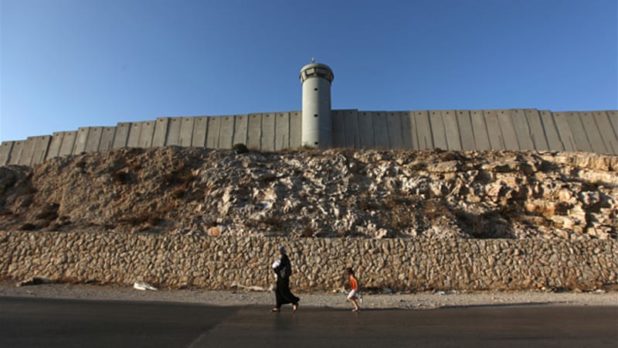 No controversy in Israel though.

Wow! So Trump can’t manage to get a measly 5 billion for a wall to keep the filthy criminals out. But he can get 3 billion to blow on taking care of their sorry asses after they invade us?

Yeah…Trump was right. I am tired of all this winning.

I predict that in 6 years, when a lunatic Democrat is elected president, the borders will be opened full floodgates, and an executive order will come down that Americans will need to move their families into a single bedroom in their homes, while invader families will occupy the other bedrooms, the garage and the living room. The kitchen will be a common area. One room, one family. Soviet-style. I also predict that people will accept it like the good sheep they’ve been trained to be. For now, appreciate the relative trickle coming in under Trump, l believe things will go full Soviet Union.

Smallpox vaccinations stopped in the 1970s; but supposedly there is enough vaccine for the Amercian public, should it surface again. No doubt the chosen few have already been vaccinated, even though the common man was denied. Myself, I’ve had about every availble immunization, even rabies. I had the rabies immunization before I went on a backpacking trip to Central America. One nightmare of a disease to avoid. If I remember, the rabies immunization was spread over a few weeks, and several injections. Maybe 3 injections.

Man you’re going to find the US a very unpleasant place to live as the demographic shift continues which we can do nothing about.

Where will you flee? South America?

No they didn’t. We were still getting small pox vaccinations in the 80’s and 90’s and they have continued to be recommended for people traveling to much of Africa, Asia, and South America.

What are you going to do about it?

Remember that this isn’t a matter of not having the money to build the wall. It’s a matter of traitors wanting us to burn that money trying to accommodate a never-ending influx of foreigners.

Right. Somehow we are supposed to believe that this is just “too hard” of a problem for government to solve, so we all just have to accept the invasion.

We need to vote every single anti-American out of office, starting with all of the dual citizens.

Our border has always been porous, through consecutive Republican and democratic administrations. Big business wants the free flow of goods, capitol and labor. They have no use for borders. And both parties pander to the deep pockets of their lobbyists. This is why republicans won’t give Trump his wall. Globalization is inevitable.

That may be true but we haven’t ever faced the kind of immigration problems that we are facing today.

Exactly, and I’d add, corporate America that envisions a world without borders. Globalization.
Globalists see an increase in global gdp of 78 trillion without any borders. 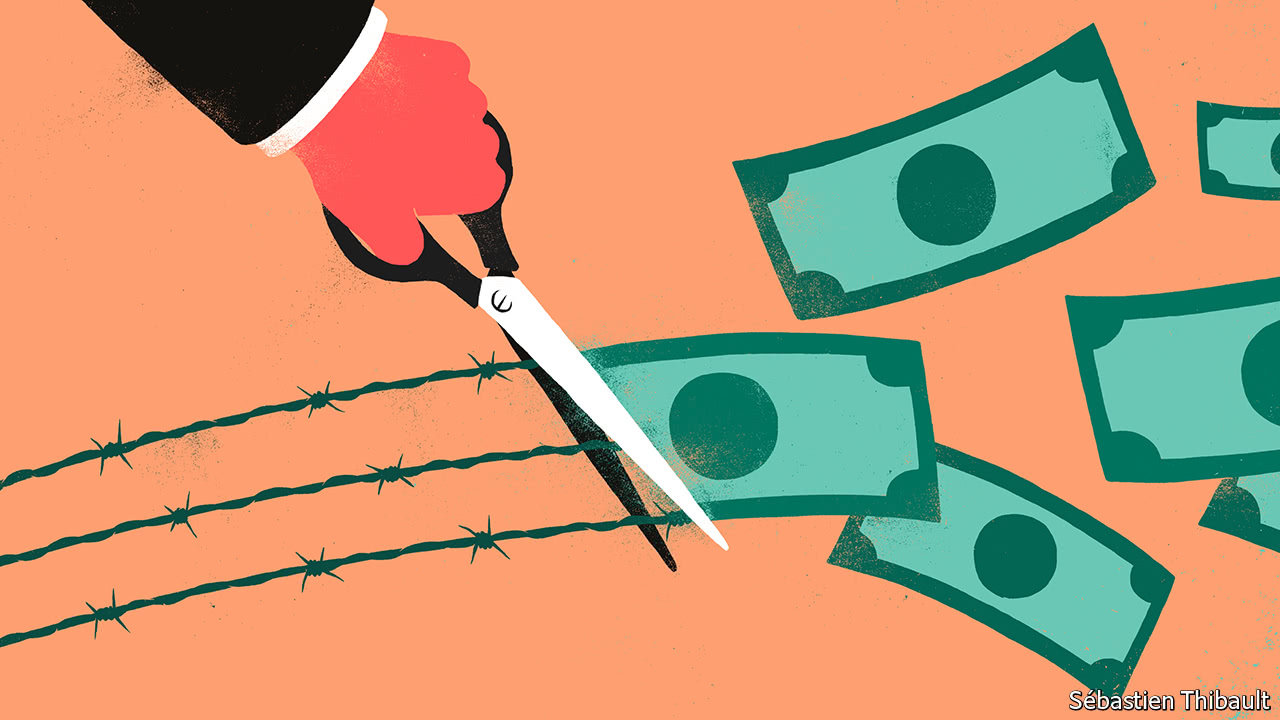 A world of free movement would be $78 trillion richer

Yes, it would be disruptive. But the potential gains are so vast that objectors could be bribed to let it happen

I don’t know why DHS won’t just shut the doors and let nature take its course. These are not citizens of the United States. If their home countries want to help them they can start by taking them back and treating them in their own country.

Because if they did that then Ivanka might start crying.

Our country needs to burn and collapse all to avoid Ivanka shedding a single tear.

If I remember, the rabies immunization was spread over a few weeks, and several injections. Maybe 3 injections.

In the 1950s, my brother suffered a dog bite and the dog disappeared. He had 7 painful shots. Maybe that has changed.

That reminds me of a comment that might be typed out of anger and jealousy from the warm confines of a bunker deep within the uterus of Hillary Clinton.