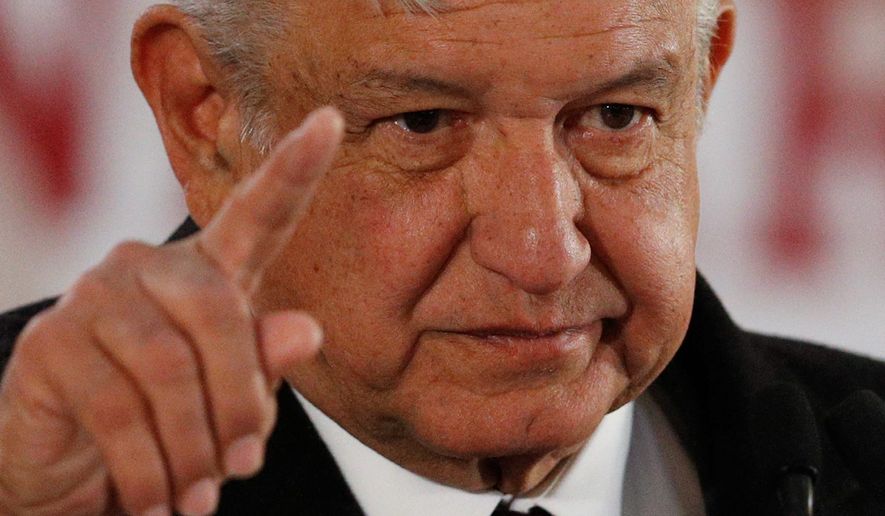 Mexican president admits that Mexico was working with criminals to illegally storm across our borders. The Mexican president’s statement is just shy of openly declaring war on the US. Mexico has declared their official stance that the U.S. border is not a legitimate national border, and that Mexico is the legitimate government for what we currently refer to as the U.S. Now, lets see how many of our politicians collude with this foreign power in their declaration of annexation.

In a pointed letter released Thursday, López Obrador lashed out at Trump for what he described as the U.S. president’s “turning the United States, overnight, from a country of brotherly love for immigrants from around the world, to a bolted space, where there’s stigmatizing, mistreatment, abuse, persecution, and a denial of the right to justice to those who seek – with sacrifice and hard work – to live free from misery.”

López Obrador said that “social problems are not solved with duties or coercive measures,” and alluded to the United States’ history as a nation of immigrants: “The Statue of Liberty is not an empty symbol.”

He added in the letter, which he provided a link to on his Twitter account, that in contrast to Trump’s approach, Mexico is doing its part to avoid migration through its territory as much as possible, without violating human rights.

“Peo­ple don’t leave their home­lands for plea­sure but out of ne­ces­sity," the Mexican leader said.

López Obrador said in the letter that his foreign relations secretary was leading a delegation to Washington D.C. to speak with Trump administration officials in order to seek a peaceful and negotiated solution to Trump’s threat to impose stiff tariffs on goods from Mexico if the country doesn’t do more to slow irregular migration.

He noted that his outreach was not to be interpreted as a sign of weakness.

“I’m not a cow­ard or timid, but act out of prin­ci­ples. I be­lieve in pol­i­tics which, among other things, was in­vented to avoid con­fronta­tion and war.”

President Trump on Thursday abruptly announced a new 5 percent tariff on Mexico beginning in early June, saying the levy will “gradually increase” until the ongoing illegal immigration surge at the southern border is “remedied” and illegal migrants “STOP.”

“On June 10th, the United States will impose a 5% Tariff on all goods coming into our Country from Mexico, until such time as illegal migrants coming through Mexico, and into our Country, STOP,” Trump wrote. “The Tariff will gradually increase until the Illegal Immigration problem is remedied, … at which time the Tariffs will be removed. Details from the White House to follow.”

Fox News was told the tariff on all goods by land, sea, and air from Mexico will hike to 10 percent on July 1 – and potentially increase substantially from there.

“If Mexico still has not taken action to dramatically reduce or eliminate the number of illegal aliens crossing its territory into the United States, Tariffs will be increased to 15 percent on August 1, 2019, to 20 percent on September 1, 2019, and to 25 percent on October 1, 2019,” Trump said in a statement released later by the White House on Thursday. “Tariffs will permanently remain at the 25 percent level unless and until Mexico substantially stops the illegal inflow of aliens coming through its territory.”

The statement added: “Thousands of innocent lives are taken every year as a result of this lawless chaos. It must end NOW! … Mexico’s passive cooperation in allowing this mass incursion constitutes an emergency and extraordinary threat to the national security and economy of the United States.”

If he thinks that illegal immigrants deserve all this love, why doesn’t he do it himself in his country instead of bitching at us about it?

If these retarded beaners didn’t allow every poor person in Central America to enter Mexico on their way to the US this ‘angry letter’ would not be necessary. Now they get to get publicly slapped and I hope this letter only makes things worse for them.

I’d be so happy all the time if the US were an anti-immigrant country.

Can’t fault Trump’s logic. Mexico has been enabling an immigrant invasion by people smugglers and the profitable and destructive industry of illegal and deadly drugs to the detriment of the US. Time to put the brakes on. 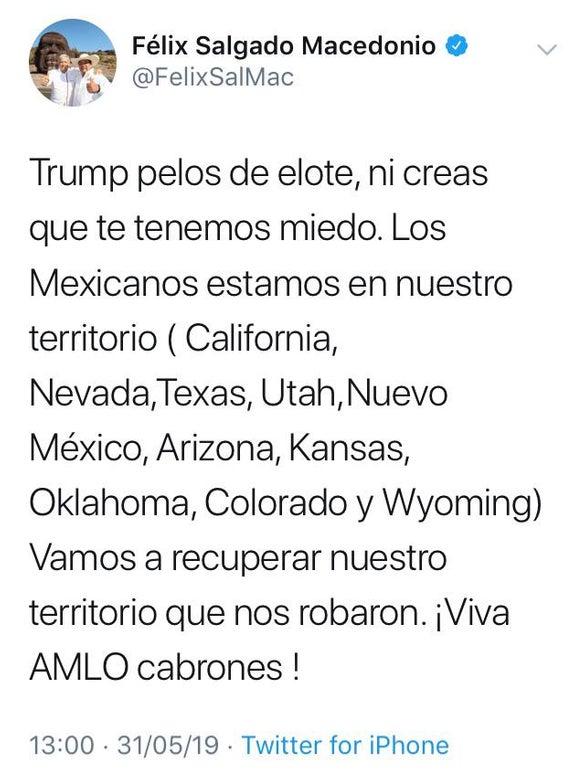 “Trump corn husks, do not think we’re afraid of you. Mexicans are in our territory (California, Nevada, Texas, Utah, New Mexico, Arizona, Kansas, Oklahoma, Colorado and Wyoming) We are going to recover our territory that was stolen. Viva AMLO bastards!” 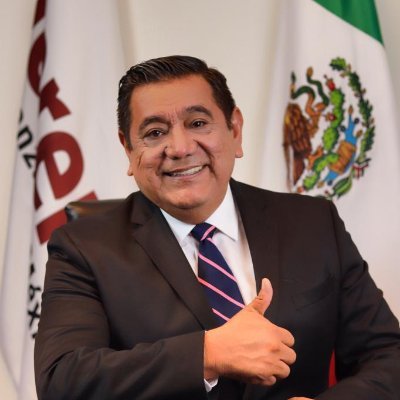 “Trump corn husks, do not think we’re afraid of you. Mexicans are in our territory (California, Nevada, Texas, Utah, New Mexico, Arizona, Kansas, Oklahoma, Colorado and Wyoming) We are going to recover our territory that was stolen. Viva AMLO bastards!”

Our American military is the strongest in the world. I like to see them even try. We will send them all back to the Mayan Age. 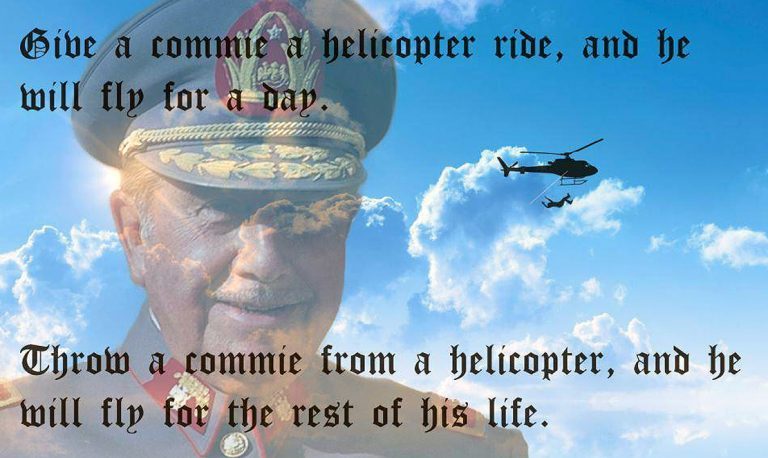 Laughable that all you guys think that damaging the Mexican economy will curb illegal immigration.

Can’t argue with that FLC…

It is about as laughable as a politician thinking they will be voted out of office if they don’t change their tune.

None of that’s going to happen…

The reconquista movement never really died, it just quieted down for a little while; I wish Trump success in this matter, because the Dems truly do not care about this country.

If the Dems would allow a physical barrier to mass invasion, this would be a non issue. Dems are no longer covert about their desire to flood the US with poor 3rd worlders, who will reliably vote D once the Dems make them all citizens by fiat.
The rest of the country doesn’t understand how serious this is. The news media shrills on about family separations, and children in cages, blah blah blah, to paint the GOP as cruel, and the Dems as altruistic. If the Dems do regain all three branches, they will take measures to ensure a permanent junta with just enough opposition allowed to make it look sort of like a democracy. Mark my words.

Hey Monte, good to see you self identifying once again.

If the Dems would allow a physical barrier to mass invasion, this would be a non issue.

Mexico has offloaded millions of their poor and they in turn send money earned in the US to their families lessening the welfare burden in Mexico.

Mexico certainly doesn’t want to upset that balance of ridding themselves of over 10% of their population and increasing money flow from the US.

Cool beans in reading posts from internet tough guys telling us how easy it is to execute children from behind a monitor.

Mexico has declared their official stance that the U.S. border is not a legitimate national border,

All borders are artificial and arbitrary.

Yeah what the hells wrong with people in the US, illegals just want to work and take care fo their families.

On July 1, 2015, 32-year-old Kathryn Steinle , while walking with her father and a friend along Pier 14 in the Embarcadero district of San Francisco, was shot by José Inez García Zárate, who claimed a gun had fired accidentally while he was picking it up; he claimed he had found the gun moments before, wrapped in cloth beneath the bench on which he was sitting.

Ronil Singh, the California police officer killed by an illegal alienlast week. On Friday, Gustavo Perez Arriaga, a Mexican illegal alien, was arrested near Modesto, California, on charges of killing Cpl. Ronil Singh after the young cop pulled the suspect over under suspicion he was driving while intoxicated. Stanislaus County Sheriff Adam Christianson revealed at a press conference Friday that Arriaga had ties to the Sureño street gang, had two prior arrests for DUIs, and was working as a farm laborer in the Stanislaus County area after crossing the border in Arizona several years ago.

An illegal immigrant who killed two children in a hit-and-run accident is not only avoiding deportation from the United States, she won’t receive any prison time at all.

Cynthia Garcia-Cisneros, an illegal immigrant, recently had her immigration case dismissed, despite the fact that she was convicted of two felonies for a hit-and-run that resulted in the tragic deaths of two young girls.

The list of American kills by illegals grows daily.