A California Democrat had choice words for entrepreneur Elon Musk after he announced that he plans to move the Tesla HQ to Texas and Nevada ‘immediately’ after a California county health official said that his plant could not reopen. 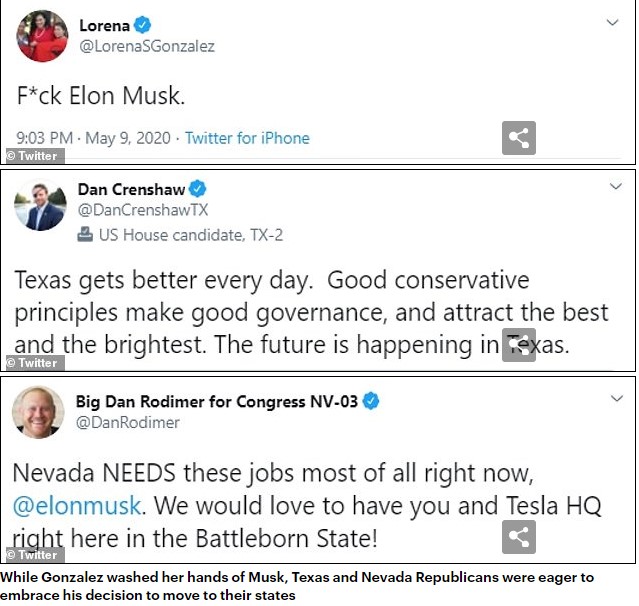 Gonzalez’s statement drew both praise and condemnation, particularly from people who pointed out the number of job losses if the Tesla factory moves.

Musk’s fury was directed towards Alameda County Health Officer Erica Pan, who on Friday announced that the Fremont company would not be able to reopen, despite California Governor Gavin Newsom lifting some coronavirus restrictions.

‘Frankly, this is the final straw. Tesla will now move its HQ and future programs to Texas/Nevada immediately,’ he said in the Saturday tweet.

‘If we even retain Fremont manufacturing activity at all, it will be dependent on how Tesla is treated in the future. Tesla is the last carmaker left in CA.’
‘Tesla is filing a lawsuit against Alameda County immediately,’ he said in an earlier tweet. ‘The unelected & ignorant “Interim Health Officer” of Alameda is acting contrary to the Governor, the President, our Constitutional freedoms & just plain common sense!’

But hours later, Pan said of Tesla: ‘We’ve been working with them, but we have not given the green light. We have not said it is appropriate to move forward.’
Musk initially defied the lockdown orders and continued operations for five days before they closed amid pressure.

Tesla tried to claim it was an essential business, but was shutdown by public health officers.

Musk later tried to rally dozens of employees together and asked them to return to work in late April, NBC Bay Area reports. 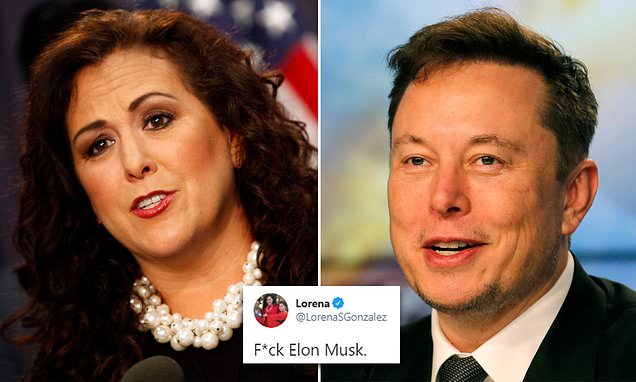 San Diego assemblywoman Lorena Gonzalez made no bones about her displeasure with Tesla CEO Elon Musk after he said he'd move his company to Texas or Nevada Saturday. 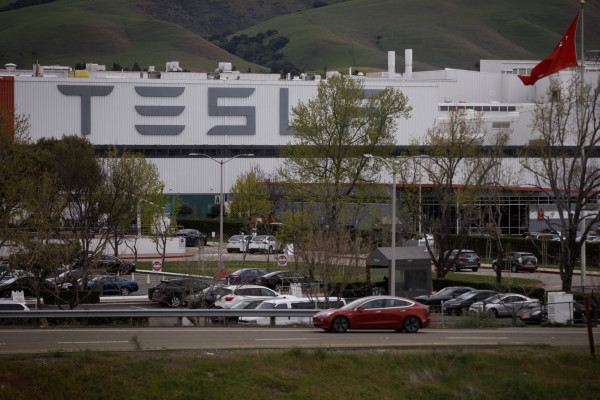 Elon Musk sues, threatens to move Tesla out of California over coronavirus...

It’s the latest threat in a now months-long dispute between Musk and Alameda County over whether Tesla can keep making cars at the Fremont facility.

I saw this story yesterday and was going to comment on it, so glad you posted it here. I totally support Elon Musk on this issue, but not only that, I really hope this dumbass bitch ends up eating her words when Musk calls her bluff, because what she said is pretty unprecedented. Like AOC losing New York 25,000 jobs due to her shear stupidity.

Most businesses would be wise to follow his lead , commie Cal wants to eat businesses alive and tax them to death . Leave them to their shit filled streets and their tent cities !!

Elon Musk shouldn’t waste any time in packing up his operations and relocating out of state. These politicians are obviously too stupid to realize or appreciate the amount of value that Musk adds to California. We are talking about thousands and thousands of high-paying jobs that could just vanish from the state with a simple email from the boss.

We are talking about thousands and thousands of high-paying jobs that could just vanish from the state with a simple email from the boss.

That is why this Politicians statement is really dumb! If I were Musk, I would demand a public apology from her or else he should pack up shop and stick it to them!

If I were Musk, I would demand a public apology

What is this, kindergarten?

Someone said something mean so now we have to have public apologies? This right here is why America has become so weak.

This is business. The right answer here is to pack up your things and leave. The dumbass who said “Fuck Elon Musk” should face the consequences for being a moron - those consequences are lost jobs and lost taxes. A public apology is a sissy way to handle it. Something Obama would do.

Then what is your suggestion? What should happen to convince Musk to stay in California?

Nothing. He should leave.

Well ok then, that settles that! Now let’s see if it actually happens, which I doubt it will but who knows, but one thing is for sure is the cost on both ends is going to be enormous. Moving a car plant and other businesses doesn’t just happen over night.

Sure, moving a car plant is difficult but moving a corporate headquarters isn’t so hard. Not when you have the resources he does.

moving to a new corporate headquarters probably wouldn’t be that big of a stretch, especially where he would be welcomed and get even more tax incentives for the relocation.

I recently went on a the Gigafactory tour in Nevada a couple months ago. They are aggressively expanding that plant, and they do have planned extensions with regard to car manufacturing (at that point it was mainly a battery facility). Moving is easy, and it is even easier for employees that are working at the Fremont plant, since it is only 2 hrs away, cost of living is cheap, and the surrounding areas are ripe for development.

Most businesses would be wise to follow his lead , commie Cal wants to eat businesses alive and tax them to death . Leave them to their shit filled streets and their tent cities !!

Anywhere but New York or California. Of course, he should have moved to Nevada or Texas a long time ago. But better late than never.

he should have moved to Nevada or Texas a long time ago.

Commiefornia gave him a really fat subsidy to Tesla. Every Tesla car was subsidized by every commiefornian tax payer up until recently. Also, the proximity the SpaceX also helped, so he wasnt spread too thin.

At least that was what I gathered from this biography.

The unelected & ignorant ‘Interim Health Officer’ of Alameda is acting contrary to the Governor, the President, our Constitutional freedoms & just plain common sense!”

Isn’t it amazing how power in the hands of someone who doesn’t know what to do with it can cripple a business?

I wonder what an Interim Health Officer makes per hour and what experience is required for the position?

With 30,000 taxpayer OUT OF WORK it doesn’t take extraordinary intellectual powers to know this bullshit is OVERKILL and its plain ass stupid ! Over a month , WTF. Let that asshole go without income for over a month and his decision making will change quick !! You dipshits need to retreat to a fucking cave wrapped bubble wrap , My God what pussies.

Ahh, a personal attack. You clearly have no idea of what you espouse.

It is very good that I am.

Tesla CEO Elon Musk is drawing a line in the sand in his fight against authoritarian rules in California.  After several days of intense debate and argument with the arbitrary rules of the local Al…

The space X program is one of the most important innovations of our time!