(If I can remember) Every week, I’ll post a different topic of discussion. I’m genuinely curious to hear others’ opinions on matters. 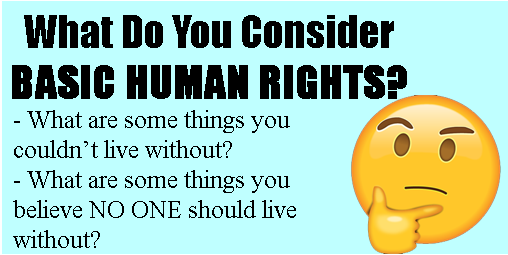 [IMG description:] What do you consider basic human rights?

I’m assuming that you’re a liberal in need of basic education, so here’s my first lesson: the questions you asked have very little to do with “basic human rights” and are no doubt meant to persuade people that everyone’s entitled to free therapy for their stress.

Here’s a better framing of the fundamental question: What am I, as a total stranger, obliged to give you because you’re alive and in my presence, whether you’re the most interesting man in the world or an illegal alien who just shot a woman on the pier in San Francisco?

What I can’t live without has nothing to do with basic human rights. What someone I don’t know shouldn’t live without likewise is much broader than what that person is entitled to because of having a pulse.

Everyone needs water or they’ll die. You can’t live without water. However, that doesn’t mean you’re entitled to my water. If I’m walking down the street and you come and tell me that I’ve got to give you a sip of my bottle of water, I’m going to point you to the nearest toilet and tell you to drink out of that, dogs do it all the time.

This isn’t a fight.

Of course it is.

There is no winning or losing.

Sorry, but in the real world there are winners and losers.

Which lead to what?

Basic human rights are God-given rights. The right to live (conception to natural death) and defend that life and those you care for. The right to your opinion and to express that opinion. The right to liberty, to do as you chose as long as it does not hurt another. The right to believe as you wish without retribution or coercion.

I hope that you’ll not be disappointed but brace yourself for the worst from participants here.

Freedom To worship in a manner of your choice.

Freedom from having any one religion forced upon you.

Freedom to send your kids to school without worrying that they’ll be shot.

Freedom to gather and associate with whomever you choose.

The freedom to go off topic and post whatever derp your Reptilian Complex compels to you to post.

Lastly the freedom to ignore the Willfully Ignorant.

This does not need to be a fight. The OP has requested as much but those who are not respectable themselves will certainly have no respect for others.

This does not need to be a fight. The OP has requested as much but those who are not respectable themselves will certainly have no respect for others. 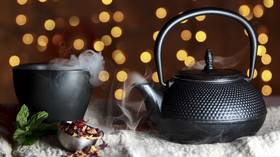 I’ve always contended that most sane and honorable people will agree on most self-governing policies all through the political spectrum i.e. right to life, clean up after yourself and freedom of association. The disagreement is frequently on how to achieve those goals.

1.) Do all you have agreed to do.
2.) Do not encroach on other persons or their property.

You aren’t there yet and probably never will be…but one of the final redpills is: rights don’t exist. You have to separate the rights that are self evident liberty principles, from muh yuman rights to gibmedats.

A typical liberal “human right” that has little meaning. I’m sorry, but if you’re a wino living underneath the freeway in LA, at rush hour your clean air is in serious jeopardy and I don’t care. Go live in Bakersfield. Then you’ll just need to worry about dust storms fouling up your clean air.

Then again where do morals come from? Monkeys do not have morals, they couldn’t have evolved. Whose moral standard do we use? Yours? Mine? Adolph Hilter’s? Jeffery Epstein’s?

A typical liberal “human right” that has little meaning.

It has a good deal of meaning if you live in city during an atmospheric inversion.

It also means that I don’t want to breathe the smoke from your cigarette nor do I want the pollutants from your coal fired electricity plant drifting into the air I breathe.

Does that clear the air for you?

Living in a city is not a human right. Your personal preferences are also not human rights.

I see that I forgot something .

The right to be willfully ignorant.

I believe that although rights are not natural, might can make imagined rights a reality. However, the enforcement of the rights is really what matters because government can claim to protect your rights while ignoring them at the same time.

Freedom to gather and associate with whomever you choose.

A list of basic human requirements for survival and some modicum of “pursuit of happiness” would be good. The problem arises as the list expands from needs to wants. In response to those Watchman listed:

Clean Air Yep - but it’s always a balance between that and having a modern civilization.

Pure drinking water Yes - we must upgrade the delivery system, as aging infrastructure and giant population strain the system.

Freedom To worship in a manner of your choice. Yes, as long as you’re not harming another.

Freedom from having any one religion forced upon you. Yes, or atheism

The freedom to go off topic and post whatever derp your Reptilian Complex compels to you to post. Hmmm - perhaps the freedom to start another thread on that topic instead of hijacking the discussion.

Lastly the freedom to ignore the Willfully Ignorant. Yes, and the responsibility to debate without resorting to ad hominem attacks.

This does not need to be a fight. The OP has requested as much but those who are not respectable themselves will certainly have no respect for others. Yep, but bear in mind, people have strong opinions, and get ahead of their skis at times…

You posted nothing but pure emotional dreck.

Does that clear the air for you?

No, you don’t get it. You’re conflating “likes” or “don’t wants” with human rights. I don’t want smoke from the Sonoma fire drifting over into my area, but it burns, and the wind blows, and I’m SOL for awhile.