It takes a fairly high dose of the toxic metal arsenic to be fatal to humans, but it can accumulate in the body over time and cause cancer and diabetes.

Whole Foods defended its water as ‘completely safe,’ but Consumer Reports is urging people to be wary of water products from the organic grocer and Dr Pepper.

The healthy and organic grocer’s own brand of water had over three parts per billion (ppg) of arsenic in each bottle.

In the US, the Environmental Protection Agency (EPA) considers anything under 10 ppb to be safe.

But in tests of 130 different brands of bottled water, the new report found that 11 had detectable amounts of the heavy metal.

Arsenic is a naturally occurring element that often contaminates ground water in many countries including the US.

In a single, high dose, the substance can be fatally toxic.

But long-term exposure to lower levels can cause skin lesions, and may cause skin, bladder and lung cancers, as well as raising risks of diabetes, developmental delays, heart and lung disease.

Plus, it raises risks of dangerous pregnancy complications for mothers and babies alike.

Getting arsenic out of water is one of the reasons bottled water is supposed to be safer.

But Consumer Reports’s findings suggest that buying bottles from a number of brands may not be any better than taking your chances with the tap.

But Whole Foods insisted in a Tuesday statement that it ‘would never sell products that do not meet FDA requirements.’

That may technically, nearly be true, but Consumer Reports is urging that even levels above three ppb should not be acceptable.

Meanwhile, Dr Pepper’s Peñafiel had 17 ppb in some tests - a 70 percent higher concentration than allowed by EPA regulations.

Peñafiel, which is made in and distributed from Mexico, is currently on an import watch due to its alarming arsenic levels.

But Consumer Reports investigators were ‘easily’ able to find and purchase the contaminated bottled water in brick-and-mortar stores and on Amazon.

The EPA told the watchdog group that it was taking ‘appropriate action.’

For its part, Keurig Dr Pepper temporarily halted production of the bottled water, but has not planned a recall.

Consumer Reports is urging the company to issue one and pleading with the FDA to change its standards.

‘If anything, bottled water—a product for which people pay a premium, often because they assume it’s safer—should be regulated at least as strictly as tap water.’ 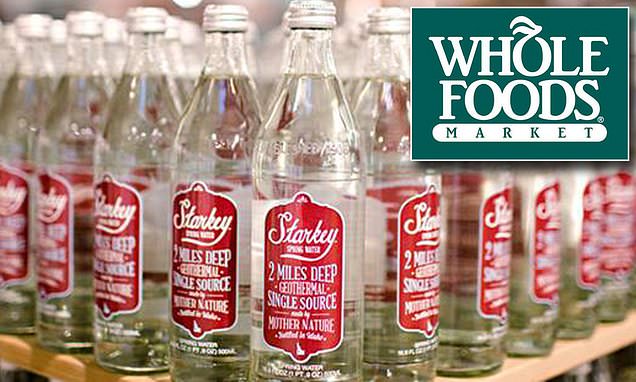 A Consumer Reports investigation found that samples of Whole Foods's Starkey bottled water come dangerously close to federal limits on arsenic in drinking water, and one sample exceded them.

This is why I drink purified water from my own personal well.

I drink Fontis Mountain Spring Water…from a spring in Georgia. I also use their distilled water to make my coffee.

That’s awesome man. Not all of us have a personal well at the moment.

Not everyone can, either. Water purification systems, absolutely.

That shit is confusing as hell though. I started looking into a Berkey and just gave up. I order 2 cases of Evian a week for straight drinking and use a Brita for water I boil or cook with.

Brita for water I boil or cook with.

Pur was the first one I started using when I realized the brown tap water of Ft. Polk wasn’t clearing out any time soon. It wasn’t long after that I realized just how much I was poisoning myself in the name of hydration.

If you don’t own your home, I wouldn’t bother installing anything other than a sink faucet and shower filter. It’s not worth having to undo a permanent installation.

My problem is I am so spoiled by Evian now that all other water tastes like shit. The Brita especially is bad which prompted me to look into larger filtration systems to begin with.

Some things to look for in bottled water…

ETA: Disregard, I read it backwards. Looks good enough, but too acidic for me. That would give me heartburn.

This is where I realized I was reading it wrong by the way. lol

It doesn’t mean None Detected, so there may be some present…at least it is below the limit.

In that case, I would get a purification system anyway. That report details absolutely none of the data taken or how it was analyzed.

It was analyzed by an independent testing laboratory…presumably with instruments capable of detecting each analyte.

I’ve been drinking it for years. It’s best for me at 34deg F but it begins to warm up as soon as I take it out of the cooler…so I often catch myself guzzling it.

A softener system will also get the pH levels closer to 7.4, which is what our body’s natural level is supposed to be. The closer the pH of the water is to your body, the easier it is to absorb.

I’m a water retainer…have to take diuretic pills daily…or best not skip more than two (at most three) consecutive days.

I could probably use a little more water retention myself. I’m way to young to be waking up this many times at night to pee!