Well folks, this is it, for all the marbles and one case that could decide Trumps run in 2020 is a success or not! I am very nervous about this one, because to be honest, this could go either way, as what Roberts has shown us in recent history. If the SCOTUS rules in favor of Trump’s stand that DACA was a unconstitutional move by Obozo, then watching liberal heads explode when the final decision is rendered will be almost better than 2016 election night, which is why I have been following this case very closely, it really will have seismic repercussions once the case is heard and concluded. We are either a nation of laws or we are not, and immigration is one aspect of Trump’s mandate that needs definition in order to render the lower courts who for the most part have been playing obstructionists especially with the Obozo appointed ones to no longer have the power to block Trump’s immigration agenda.

This also brings up another issue with possibilities to consider when contemplating the immigration issues of illegals currently in the country, and what a ruling against them might mean. If the SCOTUS rules in favor of the Trump Administration, then this could be a rallying cry for Dems in the 2020 election that could spurn negative returns for Trump voters, as this decision will be made before the 2020 elections.

When they say “showdown” it really is that, and much much more as this could be what determines the future of immigration and the demographics of the country as a whole for generations to come. There is a lot at stake on this decision alone, and I certainly don’t envy the justices position in trying to weigh in to deliver a final decision.

It is on its face unconstitutional as it gives a special benefit to a select group of people. SCOTUS should immediately overturn it but Chief Justice Roberts is a beta cuck and will likely side with the left on this issue.

Not only is it unconstitutional but I want every single one of these little (now adult) shits kicked out of the county WITH the families that illegally brought their lazy asses here to begin with. GET THEM OUT!

Well the thing with Roberts, is he one, and the balance is still in favor of conservatives with recent appointments such as Gorsuch and Kavanough so we will see. But yes the current DACA BS is indeed unconstitutional and on that alone should be overturned. It was an executive over reach by the Obola to appease his Soros Lobbyist group “Open Societies”!

If the SCOTUS rules in favor of a bunch of illegals this country is finished and there is no turning back. This will open the floodgates even worse because it will validate all of the illegal immigration anchor baby bullshit that has been destroying this country.

Hopefully the SCOTUS will follow the Constitution and rule that Presidunce Odumbass had no authority to create DACA, a law, by fiat, and strike the whole miserable piece of shit down the drain!

Agreed…although DACA was never a law or even an executive order! It was a fucking memo from the DHS head under the Kenyan.

Twice, Trump has offered to give DACA recipients a pathway to citizenship. He offered amnesty for 2 million Dreamers, just in case there were actually more than the 700k that signed up. All he wanted was funding for the border wall, to halt the drugs and sex trafficking that flows across the open border areas. Twice he offered, twice the democrats refused. They refused to end the uncertainty of the Dreamers future. I don’t understand how the Dreamers still back the Democrats when they know that the Dems screwed their opportunity to become citizens twice. Now, they will have to go back. The dream is over for them and the Democrats own it. This will be nothing but a procedural vote so the Trump administration can stop getting the work they were elected to do stopped by a bunch of low-level judges.

As DACA was an executive order and bypassed laws stablished by congress, it should be most interesting how Roberts deals with this in his attempt to keep the SCOTUS neutral and non political.

I still believe Roberts to this day was blackmailed!

There has to be something there.

True, which is going to be extra sweet if Trump ends up victorious on this ruling! Get your popcorn ready because it’s going to be delicious watching the Democrats have a moment that will put Chernobyl to shame!

I still think they have him over a barrel! I heard such things about his adopted children and a bribe was involved.

I read that and esquire has an article about it.

Yeah I don’t know how much truth there is to it, but I have read that line about him more than once which is why I am Glad he is no longer a vote we have to count on.

The latest tactics from the left:

The brand-new liberal court-packing group Take Back the Court won a media coup last week. Its letter urging U.S. Supreme Court Justices Brett Kavanaugh and Samuel Alito to recuse themselves from three LGBT-related cases was widely covered by LGBT and mainstream outlets. The publicity win for Take Back the Court and its agenda is clear, but so is the hypocritically partisan nature of its attack on the conservative justices.

That’s interesting but whatever, it won’t work anything short of killing them, which I believe they did with Scalia 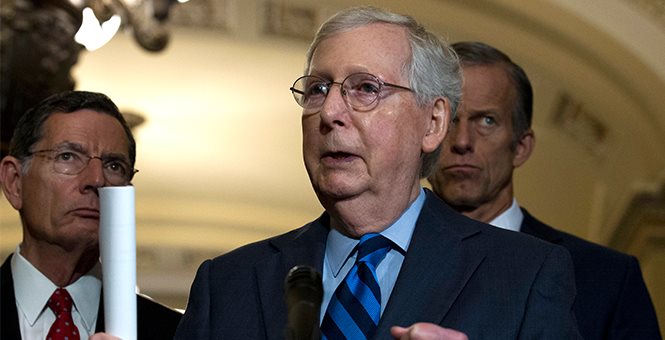 Dear GOP In Congress: Put Up or Shut Up

No more mister nice guy, no more patty cake, no more milk and cookies.I give credit where credit is due. I don’t admire much about the Democrat Party but I

DACA needs to be overturned because it’s an example of what might happen in this country if we were ruled by a King and not a president.

Mass deportations of illegals? There are now more illegals in the USA, than when Trump started his presidency.

Abolished DACA? Nope - now he’s fooling around with the courts when there is no need to.

How about abolished common core?

How about arrests and prosecutions of sanctuary city mayors, and sanctuary state governors?

Anything about massive voter fraud?

Anything about mass censorship?

How about violations of second amendment?

We voted for Trump but we got Hillary. Vote Yang and end this country so we can start fresh.