At the request of Democrats, I have delayed the Illegal Immigration Removal Process (Deportation) for two weeks to see if the Democrats and Republicans can get together and work out a solution to the Asylum and Loophole problems at the Southern Border. If not, Deportations start! 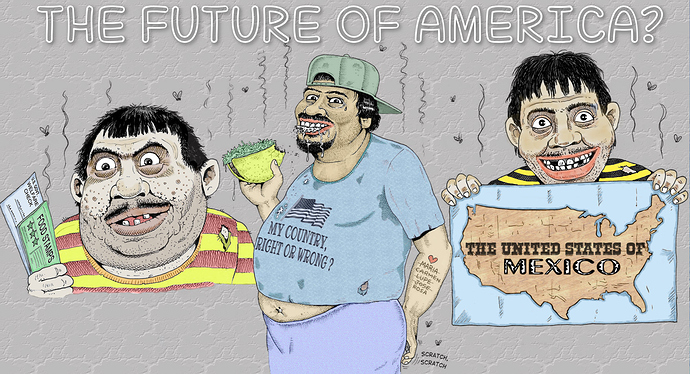 You are way off base. He is negotiating. Congress needs to get off its ass and change the deplorable immigration laws. The Democrats are balking at this and Trump is trying to get them to throw a strike at the plate.

If they do not show some motion toward doing this, the deportations will begin.

You confuse an attempt to get them to do something with giving up on the issue. He did not give up. He simply delayed the order.

I suspect that the entire educated electorate understands this. The pseudo-educated liberals and Trump-haters either do not understand it or they deny it while knowing it is the truth.

At the request of Democrats, I have delayed the Illegal Immigration Removal Process (Deportation) for two weeks to see if the Democrats and Republicans can get together and work out a solution to the Asylum and Loophole problems at the Southern Border. If not, Deportations start!

Democrats have already had two years to “get together and work out a solution to the Asylum and Loophole problems” but have refused to do so (along with functional RINO’s like Ryan previously and McConnell always). Dems see that it’s more effective to just call Trump’s bluff and watch him cave. Trump has failed to ‘grasp the levers of power’ and learn how to be an effective President.

I have to give some credit to the Obama admin where they managed to rework the military upper management and get many hardcore Democrat appointees embedded in permanent civil service positions before Trump took office.

In 2009 after the negroid was elected: Obama Administration Purges Republicans From The Civil Service

In 2016 after Trump was elected: Obama appointees ‘burrowing in’ for career federal jobs.

Come on @asaratis these deportations should have been going on full swing for two years now. We shouldn’t just have Trump threatening to deport then failing to do so. He should just be doing it.

Yes, they should have. The Democrats should also have accepted the 2016 election results. A lot of things should have happened since January 2017.

Nancy Pelosi has welcomed the delay in a tweet…but she tempers her response by saying that “time is needed for comprehensive immigration reform”…a euphemism for AMNESTY!

The Democrat Party has a way of refusing to do anything if they can’t do it all the way. They don’t want to address just two facets of our crazy immigration laws…they want to completely rewrite all immigration laws.

This is a disingenuous approach. I’m betting that NOTHING will be done within two weeks.

…and then they’ll ask for more time.

This sucks but it’s just more political posturing. Trump trying to make himself look like a nice guy to moderates. Unfortunately most of the population is still moderate. That’s changing of course cause eventually everyone will have to pick a side. I just hope the moderates go right. Many of them should. But most people are in the center politically and they either lean right or left on some issues. I am sure we would find a lot of Independents are moderates.

Also I imagine a lot of the states and or cities would fight him over it so it wouldn’t be the massive successful round up a lot of people thought it would be. They would probably get a few hundred thousand. Which would be good but we are looking at maybe 40 million being here.

Also it seems like he is trying to get something bigger done about the system. It won’t happen though cause the Democrats won’t go for it. The deportations have to happen. Also he might have decided this was too early. He knows he has been obstructed and blocked from getting a lot of things done so maybe he wants to save it for later. It would be a huge campaign boost. Of course they could always just do another round of deportations.

He called off the attack on Iran at the last minute and came out looking fucking golden because of it. I mean a real political champ. Saying he wasn’t going to kill 150 Iranians over an unmanned drone. That’s amazing political maneuvering. People can say what they want but they will try to force him into a war. So the (((deep state))) war machine and all the Neocon warmongers were basically told to fuck off. Will they ratchet it up? Probably.

Trump reminds me of an irresponsible father who keeps promising his kids all kinds of grand things and actually never even gives the bare minimum. For Trump, talk doesn’t lead to action, it replaces it.

So how do you explain his accomplishments since taking office…despite the asinine resistance and obstruction from the detractors?

Would you rather clean the floor off temporarily or fix the running faucet?

His accomplishments are meaningless if the country gets invaded, overrun, and destroyed. It’s like applauding Nero for fiddling while Rome burned.

But you still cannot affix the failure of Congress to properly address (change) the immigration laws to Trump.

Every time he creates an executive order to circumvent the influx, the left gets some asshole activist judge (often from the 9th circuit) to block it.

He made one to stop travel to the US from certain countries and it was blocked for months by such an asshole judge…claiming it discriminated against Muslims, when in fact there were several predominantly Muslim countries not on the list.

Congress is just now coming around to admitting we have a crisis at the border.

I think this so right @Yogi! We need to let Trump do his job. A lot of time he says something just to drive the news cycle and get the media to react. Then he does something completely different than what he said just to throw everyone off. He’s been toying with the media like this his entire life. Something is up we just don’t know when Trump is going to make his next move.

He should never have broached the topic in the first place. Moderates don’t go right on their own: leaders and stunning events tilt them that way.

This is incredibly frustrating and disappointing. He knows the Democrats aren’t going to move. Why waste everyone’s time? He should just deport them and move on to building the wall.

And don’t forget in 93 when Bill Clinton was elected with only 44% of the vote, he came in and fired ALL the US Attorneys for ALL the district’s, to put in his own loyal apparatchiks.

Why the is it always Charlie Brown with Lucy and the football???

First thing Trump should have done, fire all the US Attorneys, call back ALL top military posted by Obama, purge any high rank military promoted by the mulatto ■■■■■■■

It is beyond me why the Republicans play nice in the face of cut-throat tactics by the Democrats.

GWB was a real pushover when it came to criticism from the left. He hardly ever fought back with venom…just let it slide.

At least Trump hits back when they criticize him unjustly. You’re right, though. He should have cleaned house when on his first day in office…and got rid of all the Obama holdovers…especially in the FBI and CIA.

You are taking issue with Pelosi’s statement on this?

The messaging argument is clear. The Nazi Orange Man argument of “I hate immigrants and they should go back home” is simple, short, clear and concise.

The more nuanced argument of well, its complicated, but yes, immigrants are entitled to their rights to be treated humanely, is not a simple message.

This is the story of the Democratic party. To be on the right (correct) side of the “argument” is messy.

Conflating the the issue of immigration into claiming to being on the right side of the issue is not a truthful statement it’s more hyperbole and coming from you where using such terms as “Orange man” is more suggestive of the limited humanity you claim to have! The president is loyal to Americans and the welfare of the country first who are burden with paying for third world invaders! Why is it that you lefties always base your arguments on emotions and not on the facts? Critical thinker my ass, you are a fraud to the truest sense of the word!

You are taking issue with Pelosi’s statement on this?

I do not follow Nancy and am unaware of the subject statement. Please enlighten me.

The messaging argument is clear. The Nazi Orange Man argument of “I hate immigrants and they should go back home” is simple, short, clear and concise.

Your rewording of President Trump’s views is typical liberal puerility…much akin to the FAKE news media whining that Trump “hates freedom of the press”.

Trump doesn’t hate immigrants. He is opposed to illegal immigration. There’s quite a difference in what you claim and what is truthful. Perhaps you need some lessons in honesty.

This is the story of the Democratic party. To be on the right (correct) side of the “argument” is messy.

To favor and promote illegal immigration is a ludicrous substitute for compassion and respect for our laws. If Nancy and her posse of useful idiots is so against Trump’s endeavors to enforce immigration laws, they should change the laws.

This is something he is encouraging them to do, not only with Obama’s EO generated illegal DACA shit, but with the ridiculous asylum laws, anchor baby law, chain migration laws, and other features of our existing stupid immigration policy that has nurtured the influx of illegal immigrants and fake asylum claims that we have today.

Nancy Pelosi is an evil, disingenuous bitch, living in a gated community in a walled mansion…complaining that a border wall is immoral.

SCREW PELOSI and all of her posse.