A white Columbia University student went on a racist rant, shouting at a diverse group of students in a viral video that’s been viewed more than 1.7 million times.

“White people are the best people that ever happened to the world!” yells the student, identified by the Columbia University Spectator as sophomore Julian von Abele.

“We are so amazing! I love myself, and I love my people! F— yeah white people!” the student yelled early Sunday morning.

He followed his classmates from Butler Library to a campus dining spot at about 4 a.m., waving his arms and screaming that Europeans “built the modern world” as shocked onlookers jeered at him.

“I don’t hate other people, I just love white men!” he yells, as someone off-screen sighs, “Oh God.”

Several school deans denounced the rant in a letter to the student body, and said the university was starting a disciplinary investigation.

“Although we cannot comment on the proceedings, this incident is already under investigation by the Office of Student Conduct and Community Standards, and we want to assure you that it will be investigated thoroughly, beginning with interviews of witnesses,” the letter reads.

“We are alarmed at the rise of incidents of racism and hate speech in our world today. It is more important than ever that we continually demonstrate our core values and restate our commitment to a diverse, inclusive community on campus. At Columbia, we stand firmly against white supremacist language and violence.”

A Twitter feed in Von Abele’s name as a “2016 Independent candidate for President.”

He also apparently has two books in his name for sale on Amazon, “Time and the Multiverse: Selected Writings on Novel Physical Theories” and “Physics Reforged: The New Theory of Parallel Universes, Hidden Dimensions, and the Fringes of Reality.”

An e-mail from “Justice for Julian,” which describes itself as an anonymous group of Columbia students, defended Von Abele.

“We do not agree with or condone the content of what Julian says from a historical and factual perspective; however, we maintain that he has a right to speak freely without fear of retribution from the administration and tyrannical mobs of students on campus,” the e-mail reads. “We further maintain that what he stated in the recorded footage is neither racist nor a threat to students of color on campus.”

How is it that this young man is being branded as a RACIST just for saying the TRUTH - Europeans did build the modern world. He also said he loved white people and doesn’t hate other people. How the hell is any of this racist? The newspapers that are printing this crap should be held accountable for being a part of an effort to completely destroy this young man’s life for speaking his mind. Are we not allowed to have disagreements with minorities now?

I am seriously pissed off.

I am seriously pissed off.

So do your part and help him out. As of last night the book on physics that he wrote at 17 made it to the Amazon bestseller list - despite SJWs leaving 1 star reviews and calling him racist. I bought a copy and everyone here should to.

Here is a picture of “Aala Nasir” who recorded the video and then signalled the SJW brigade to destroy Julian. Take a look at what her Twitter background says. 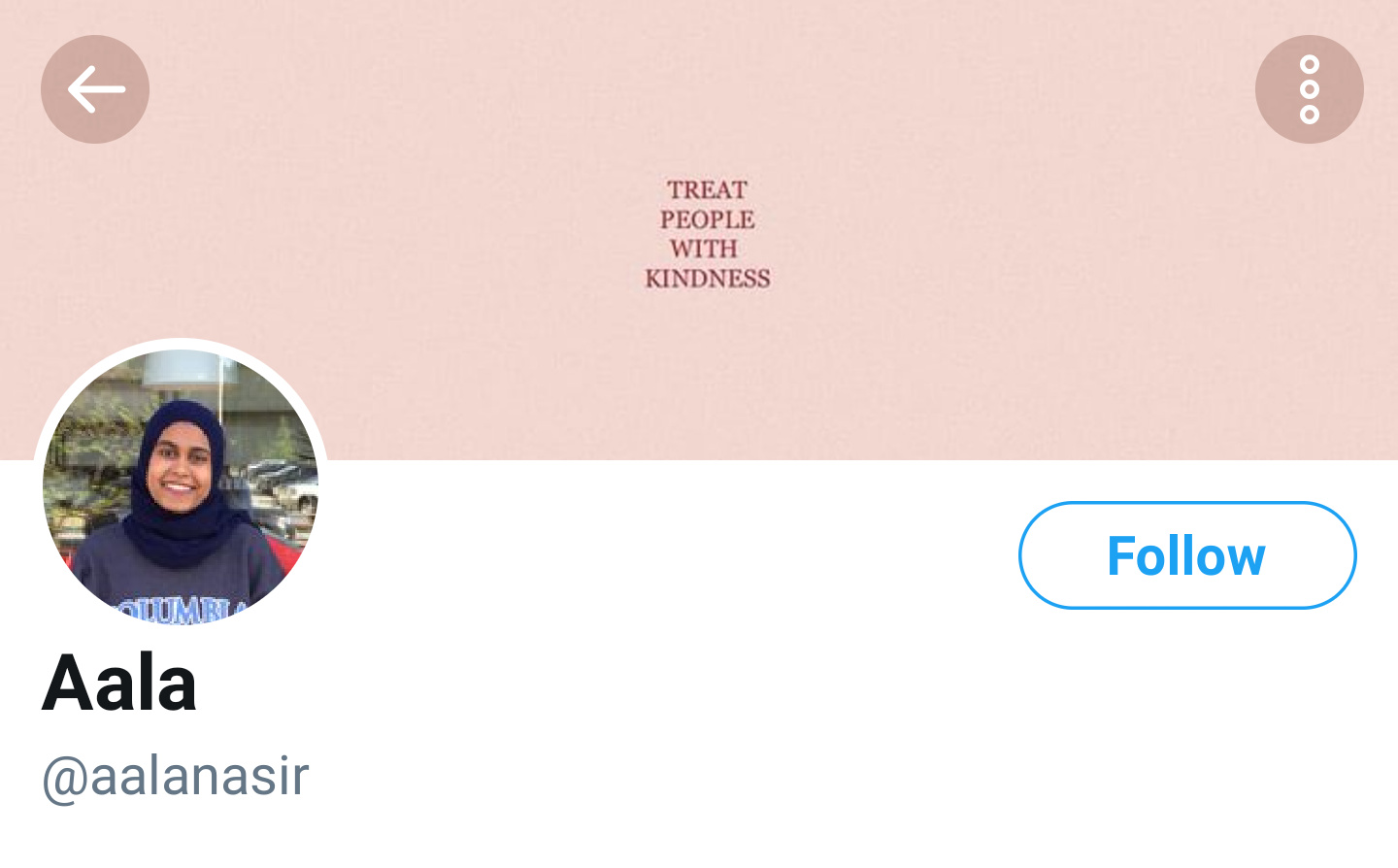 Then take a look at Tim Wise, who routinely cries out in pain as he strikes you. If you are unfamiliar with Tim Wise you should really read up on him and his views. In one of his debates he makes some long winded argument about how whites are oppressing Asians despite Asians outperforming whites in nearly every metric. 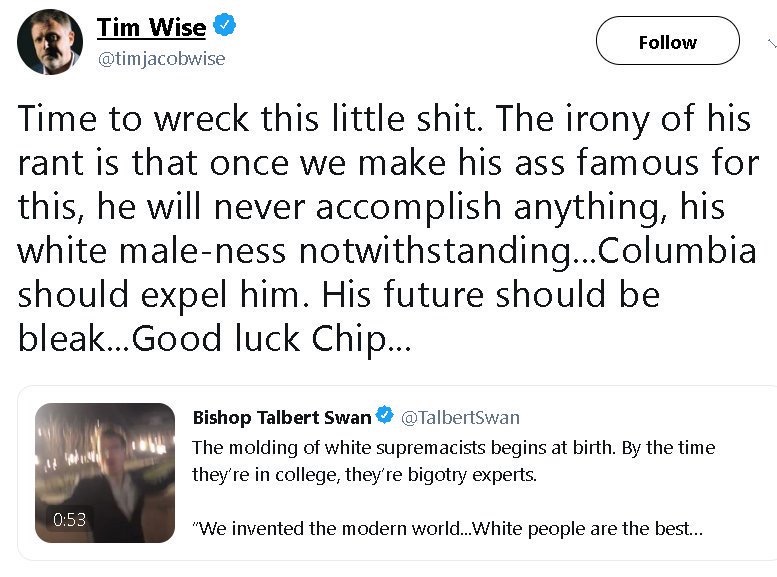 Well, first it looks like he’d had quite the night out on the town, good for him lol.

Secondly, there was nothing racist about what he said. He is simply going against the hive mind/group think. I’d imagine the group confronting him was quite annoyed that there was a free thinker in their midst.

Clearly, when you don’t drink the cool aid, the new way is not to be accepting of free speech but to try to ruin you to such an extent you can never recover.

There are plenty of people who will support him and are sick and tired of this bullying from the left. That is why Trump is president today, not Hillary.

The disdain of the press and the left is only going to grow with each instance like this.

He makes himself look an idiot saying fuck yeah, but racist?

How about black & Latino men who only date white women? Are they racist too?

He makes himself look an idiot saying fuck yeah, but racist?

Yeah - he had a bit to drink. We’ve all been there. At least I know I have.

That doesn’t make him wrong or a racist.

Europeans did build the modern world and are literally the best thing to ever happen to humanity. It’s why so many foreigners want to come live in European countries (which the US is ethnically). They couldn’t achieve, and still haven’t achieved what we have achieved.

The entitled Muslim who started the campaign to ruin this kid is complaining on Twitter that Columbia University curriculum is too Euro-centric and needs to be diversified. She’s not realizing that she is in an American school in a Western country. Maybe she should go to the Middle East and “diversify” their schools and academic thought - oh wait - if she tried that she would be stoned to death in the street.

Yeah - we whites and our stupid way of life are terrible.

I’m so sick of this shit.

Here is a picture of “Aala Nasir” who recorded the video and then signalled the SJW brigade to destroy Julian.

She obviously doesn’t like the West too much. Maybe she would feel more at home in an Islamic country and educational institution. 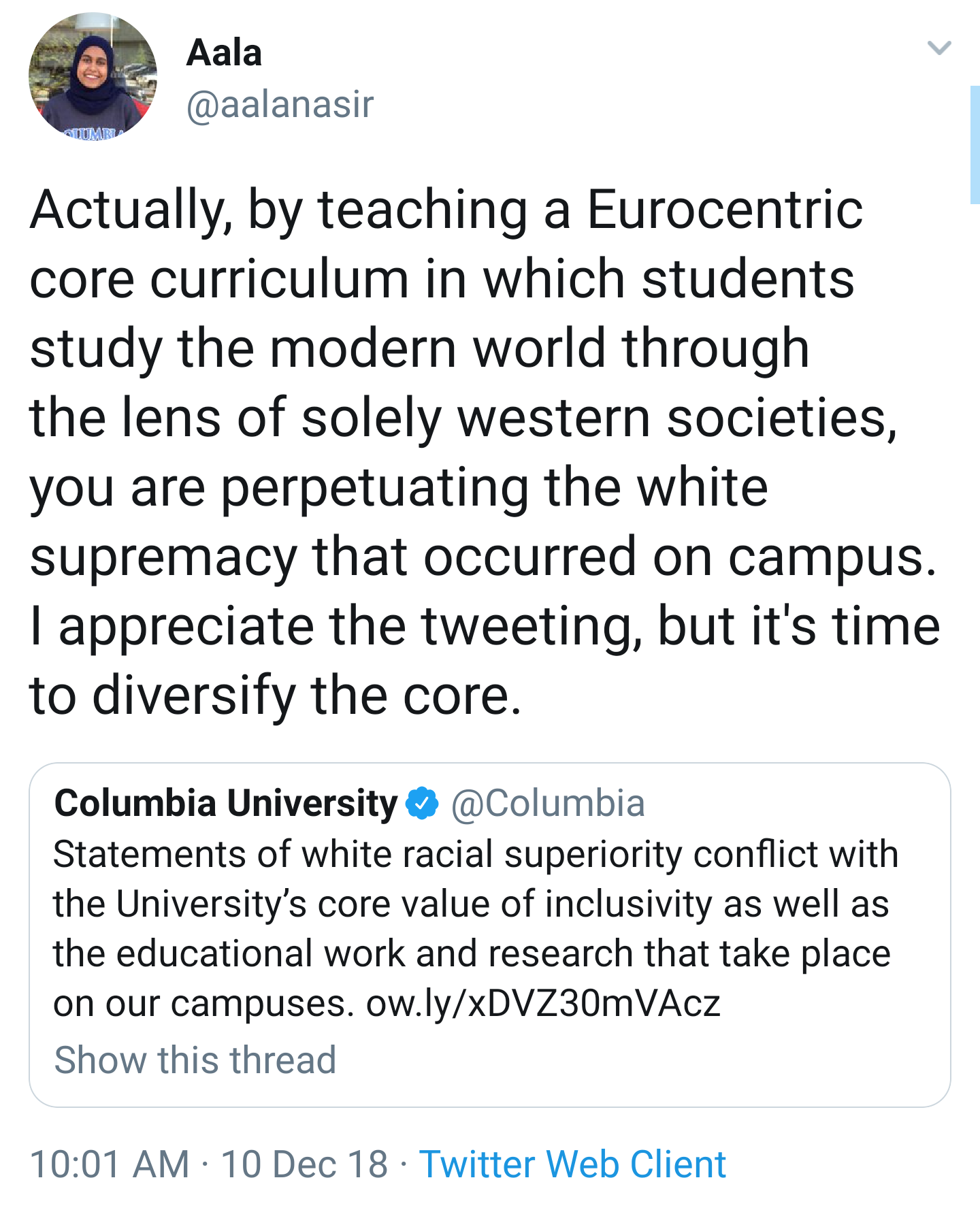 Tim Wise cucked real hard after gaslighting that kid from Columbia. I don’t know how anyone employs a man who enjoys Twitter lynchings as something other than a race baiting piece of shit but he’s an anti-white ■■■ so what do you expect? More books I guess.

Replace “white people” with any other race. Would the student be facing disciplinary action and public scorn?

Apparently it’s fine to be proud of your race and lord it over others as long as you aren’t white. 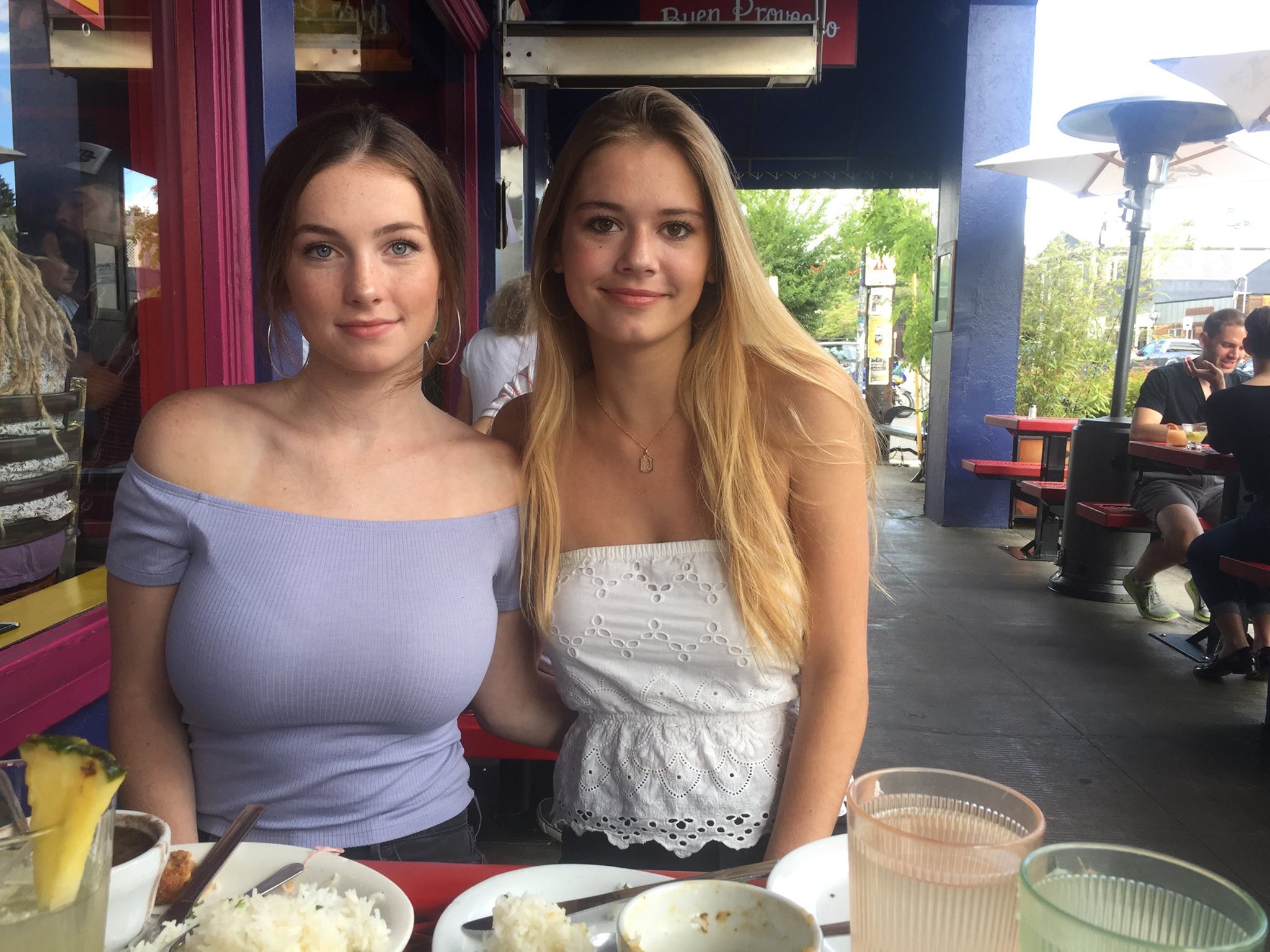 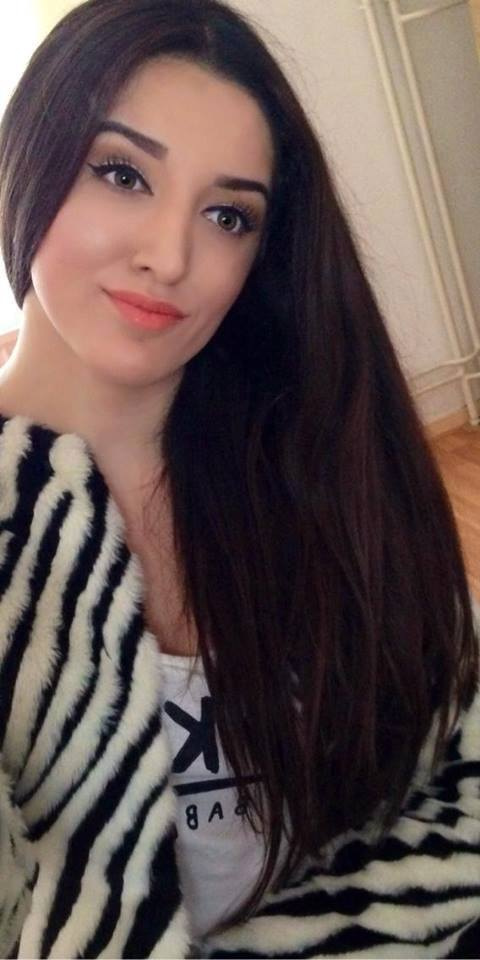 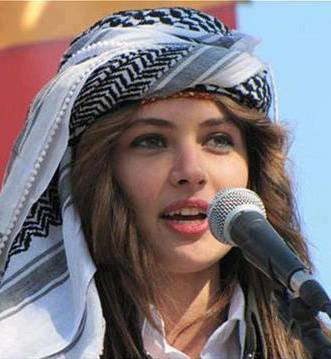 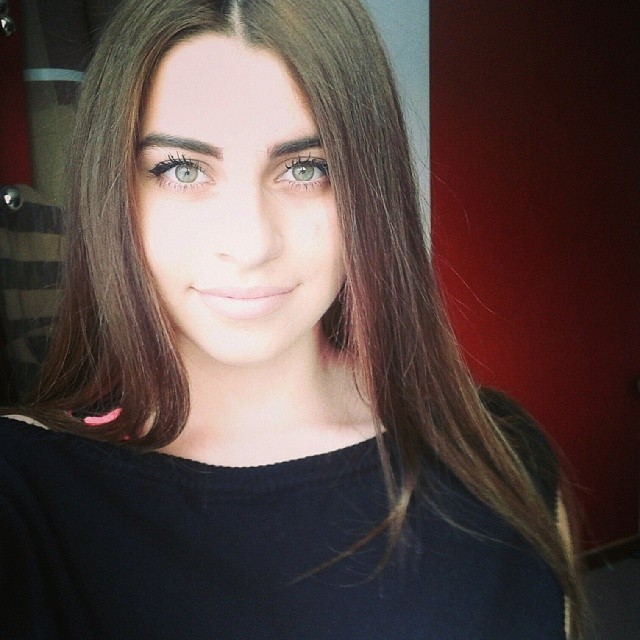 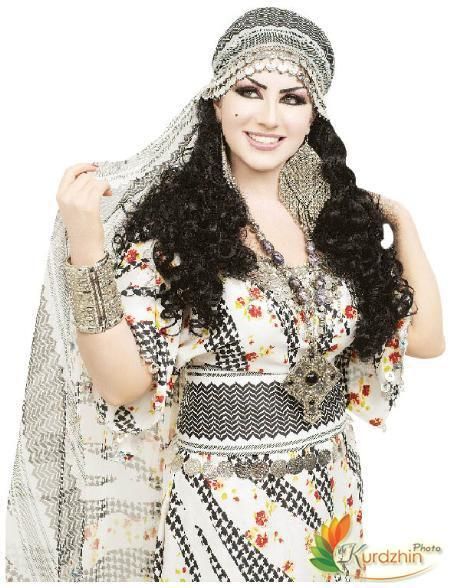 Nothing personal, it’s just my personal taste; just like how sugar transcend all thing sweet, but I prefer you, honey

Guess the race/ethnicity of all of those women pictured above. BTW there’s not a damned thing wrong with the two in your picture either although one of them is a bit skinny for my taste.

I wasnt talking about the right one at all.

How could anyone think that white people are smarter than black people? We are all EQUAL! Celebrate our differences! Embrace die-versity!

Race has nothing to do with intelligence.

Race has nothing to do with intelligence.

Race has nothing to do with it IMO.

You know that’s bullshit you just can’t bring yourself to say it.