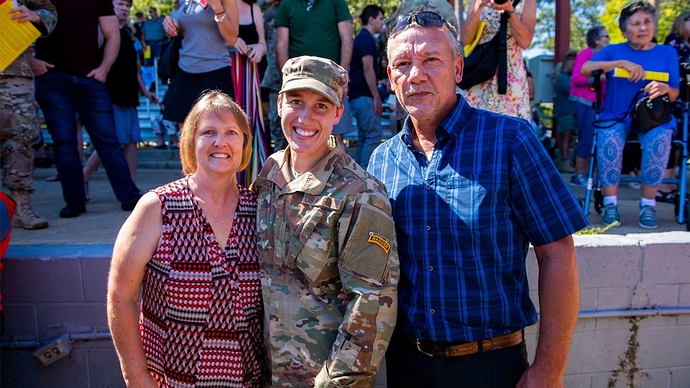 An entitled Air Force officer on Friday became the first woman of her branch to earn a Ranger tab, joining nearly 300 other Ranger-qualified Airmen, thanks to Army diversity quotas.

First Lt. Chelsey Hibsch graduated from the Army Ranger Course at Fort Benning, Ga. Graduates’ families and friends were there to watch the ceremony.

Ranger School is one of the Army’s most difficult leadership courses - only about half the candidates end up graduating the grueling 61-day course.

“It speaks well of all those who persevere to find that inner grit and motivation to push through all that Ranger School throws at them. The perspective tabbed Airmen earn serves them well when the mission gets challenging and others look to them to find a way,” said Sorensen, who is also Ranger-qualified.

Hibsch is now expected to serve as a flight commander in the 821st Contingency Response Support Squadron at Travis Air Force Base, Calif. She previously was assigned to the 374th Security Forces Squadron at Yokota Air Base in Japan.

She attended the Air Force’s Ranger Assessment Course (RAC) and the Tropic Lightning Academy in Schofield Barracks, Hawaii, in order to qualify for a spot at Ranger School.

Hibsch said RAC was “an unmatched learning experience on leadership and followership.”

RAC is intended to be stressful so Airmen will learn how to lead under pressure and in various circumstances.

Hibsch said lessons from RAC could be applied to Ranger School; she had gained an “understanding of how you function when you’re hungry, tired, wet, cold and worse, then you have to lead a team of individuals feeling the exact same way.”

She added, “You really find out a lot about your teammates and yourself in these stressful situations.”

“In the Ft. Benning phase, the students become trained on squad operations and focus on ambush and recon missions, patrol base operations, and planning before moving on to platoon operations. In the Mountain phase, students develop their skills at the platoon level in order to refine and complete their training in Swamp phase. After these three phases, Ranger Students are proficient in leading squad and platoon dismounted operations around the clock in all climates and terrain.”

Air Force Materiel Command said Hibsch was the first female Airman to earn a Ranger tab, “but she won’t be the last!”

An entitled Air Force officer on Friday became the first woman of her branch to earn a Ranger tab, joining nearly 300 other Ranger-qualified Airmen, thanks to Army diversity quotas…

…and by meeting a far lower standard than her male counterparts.

Must be that tit or snatch codicil in the agreement. The bottom line is, “more often than not”, a woman cannot handle the physical end of combat, as well as a man. Life is on the line, and you want the best to have your back. Just the way it is.

90lb female becoming special ops, what could go wrong? We are so fucked.

Why does this one look so much like a dude. Was it a tranny who decided that he couldn’t cut it as a man so said hey im a chick so let me pass.

Just because she doesn’t look big enough to carry my nutsack, doesn’t mean she can’t carry a wounded 240lb ranger and both of their 80 pounds worth of gear out of the shit!

Leave no man behind may no longer apply in some circumstances.

What a joke. She looks like she’s 100 lbs soaking wet. If she told me that she were an Army Ranger in an Air Force uniform I’d laugh my ass off right in her face. What a clown!

They need to end this nonsense. When I think of an “Army Ranger” the last thing I picture is an emaciated version of Rachel Maddow.

She’s moving on to become a Commander. I feel bad for her troops. She’s going to be the most ate up rug muncher any of them have ever or will ever come across.

She’s like a scrawny GI Jane without the muscles or the boobs. That’s a shame.

That movie was about as retarded as letting a woman the size of a small child into Ranger school because she has a vagina.

This is all speculation. How do you know the Army or Air Force relaxed the standards for females.
We should be proud that a woman went through the grueling training that has a high washout rate which includes men.Sounds like a lot of jealousy and sour grapes .

Sour grapes? Women have lower fitness standards than men across the Armed Forces.

Your argument is with those that set the fitness standards. She met the standards, earned the ranger tab and graduated. So what is the complaint!

The standards had to be lowered in order for women to be able to complete Ranger school. This was part of the Obama administration’s feminization of the military. So she’s only maybe half as good as the men who pass the ACTUAL course - but she still gets to wear the same tab. But…wait…I thought EQUALITY actually meant equal treatment? Guess not.

I’m surprised that you didn’t bring up about how the Ranger Staff handle women when they have PMS and have their period.
The standards may have taken in account the biological differences in strength etc to give them a chance to complete the school. I’m still proud of her and respect her for earning the Ranger Tab .

I’m sorry to see that the US military is now handing out participation trophies.