How are braided hair and dreadlocks “natural”? Whats next, banning face tattoo discrimination in the work place?

The state’s Legislature approved a measure banning the form of racial discrimination. It now heads to the desk of Gov. Gavin Newsom, a Democrat.

California is poised to become the first state to ban racial discrimination against people based on their natural hairstyle.

The State Assembly voted unanimously on Thursday to approve the measure, which the State Senate approved in April. It now heads to the desk of Gov. Gavin Newsom, a Democrat, to be signed into law.

The bill would update the definition of race used in existing law to be “inclusive of traits historically associated with race, including, but not limited to, hair texture and protective hairstyles.”

“In a society in which hair has historically been one of many determining factors of a person’s race, and whether they were a second-class citizen, hair today remains a proxy for race,” the bill says. “Therefore, hair discrimination targeting hairstyles associated with race is racial discrimination.”

The measure, known as the Crown Act — an acronym for “Create a Respectful and Open Workplace for Natural Hair” — was introduced by State Senator Holly Mitchell of Los Angeles, a Democrat. Governor Newsom’s office did not immediately respond to a request for comment on Friday.

“This is a fundamental issue of personal dignity and personal rights,” Ms. Mitchell said in an interview on Friday. “This bill has truly struck a deeply personal chord with people because there is something so deeply personally offensive when you are told that your hair, in its natural state, is not acceptable in the workplace.”

Ms. Mitchell said the bill seeks to ban employers and schools from enforcing grooming policies that claim to be race neutral but in reality have a disproportionate impact on people of color.

She said she had been stopped on the street or had received letters from black people, many of them parents, who had shared stories of themselves or their children being singled out by bosses or by teachers because of the texture or style of their hair.

“I have heard from parents whose children have been sent home from school because they were told their hair was unruly,” Ms. Mitchell said. “Or even more comically from my perspective, that their hair was a distraction to other children. Other children are distracted, so you have to leave.”
The bill points to the history of anti-black racism in the United States and the role it has played in shaping Eurocentric beauty standards and ideas of what constitutes a professional appearance.

“Professionalism was, and still is, closely linked to European features and mannerisms, which entails that those who do not naturally fall into Eurocentric norms must alter their appearances, sometimes drastically and permanently, in order to be deemed professional,” the bill says.

The bill also highlights what it calls a shortcoming of anti-discrimination law: Federal courts have ruled that the law protects African-Americans when they are discriminated against for wearing their hair in Afros, but not when they wear it in other natural hairstyles, or in braids, twists or locks.

A proposal to ban discrimination on the basis of hair in the workplace, housing and public schools was introduced in the New Jersey Legislature this week. That measure was in part a response to an episode last December when a black high school wrestler was forced to cut his dreadlocks ringside or else forfeit a match.

In February, the New York City Commission on Human Rights issued new guidelines that banned discrimination on the basis of hair or hairstyle at work, at school or in public accommodations.

Ms. Mitchell, who has worn her hair in a natural style for 20 years, said she recently found a picture of herself and her mother at her 1982 high school graduation. In the photo her hair was styled naturally.

“Thirty years ago when I was in high school in Riverside, a pretty conservative, predominantly white school, there was never a question as to whether or not my hair was appropriate,” she said. “Here we are years later and black girls are being sent home for their hair being a violation of school dress code. I am not sure how that happened, but now it hopefully won’t anymore.” 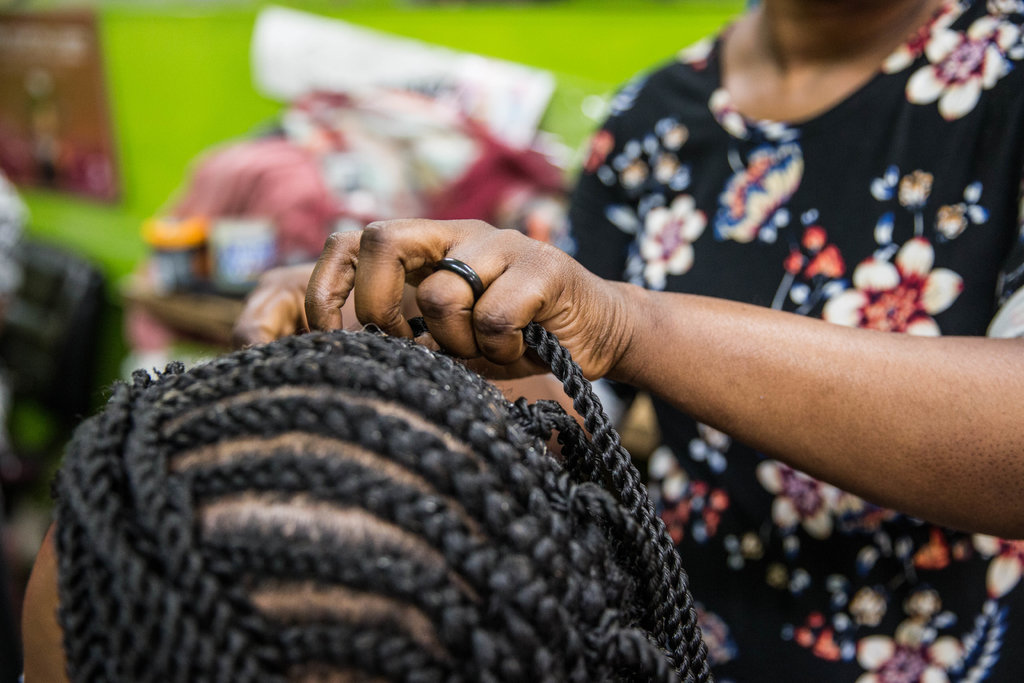 California Is First State to Ban Discrimination Based on Natural Hair

The bill was signed into law by Gov. Gavin Newsom, a Democrat.

So bald men will be excluded from this?

(I shaved my head during the Summertime, because I find it cooler on my head. But I have black straight hair - and they are natural.)

The land of fruits and nuts .

How are braided hair and dreadlocks “natural”

Dreadlocks… naturally matted and dirty… or made to look so.

Yes… california companies - especially restaurants- will love it when their employees appear dirty. And they won’t be able to do a damn thing about it.

Being required to alter their appearance to meet euro-centric standards is now called racial discrimination. The bill protects appearances “Including, but not limited to, hair texture and protective hairstyles” https://www.foxnews.com/lifestyle/california-first-state-ban-natural-hair-discrimination Imagine a restaurant or food company now forced to hire this… because it’s his heritage. “Thank you for coming to our company today to review our product offerings. We hope you find our selection…