***BREAKING NEWS*** UPDATE*** James Baker Has Flipped!***Brennan, Clapper Lawyering UP due to being Ensnared in Russia Hoax

This is getting good! I have been covering all aspects of this scandal by Obozo’s bozo’s in the Spygate thread. It was worth posting as the blind scales of justice is finding its way to the real criminals and will vindicate Trump! Finally getting closer to seeing the Democrats get hung by their own rope which will be fun to watch the gnashing of teeth here by some of the regular butthurts! I love bathing in liberal tears! 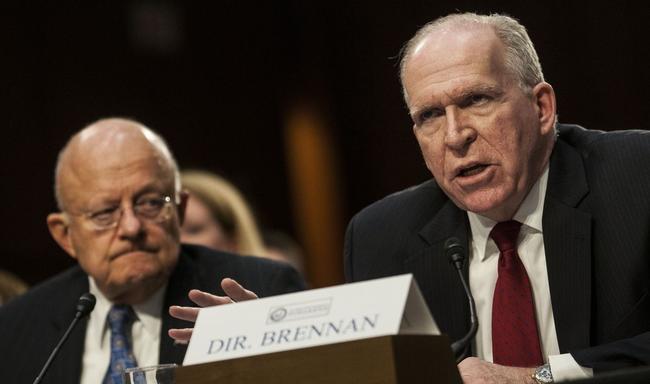 "A line of inquiry based on accusations made by George Papadopoulos..."

James Baker has flipped! He is now cooperating with the Durham investigation and DOJ!

If they end up pointing the finger at Obama, what’s going to happen? Nothing.

They should throw these pieces of crap into Guantanamo or leave them in the middle of Baghdad.

I just don’t see anything coming from this unless Durham can have total access…and I don’t see NSA and CIA going to allow it.

I hope I’m wrong here but my instincts tells me I’m not.

You know what aggravates the American people - the Washington Swamp knows what Brennan, Clapper, and the rest of the DOJ, FBI, the Rinos and Dems did to President Trump, and they pretend like they don’t know, and keep on accusing Trump of everything and anything just to see if something sticks.

Remember when Brennan was arguing that not having a Top Secret security clearance was suppressing his free speech? If that were true then every American without a security clearance would also be suppressed from speaking freely. It also means that he only wanted the clearance to access and leak classified information - which is exactly why he shouldn’t have one. I bet the same thing applies to Clapper. 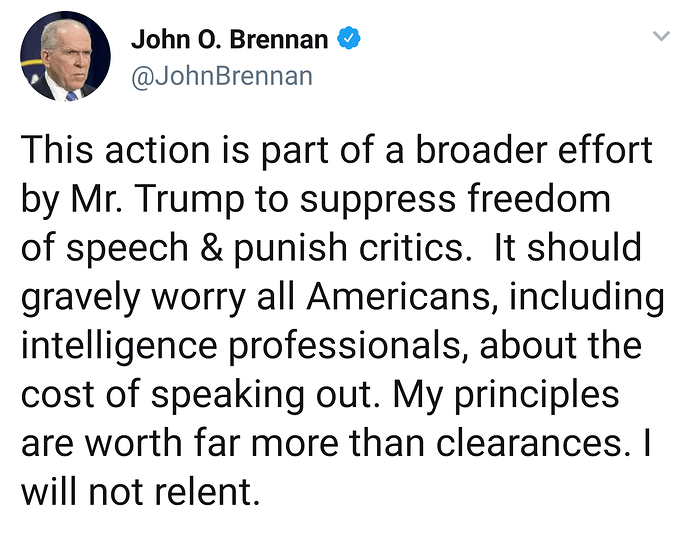 Is this revenge for Clapper easily debunking Trump’s insane right wing conspiracy theories and putting them in the trash where they belong?

Former Director of National Intelligence James Clapper said Sunday that the intelligence agencies he supervised did not wiretap Donald Trump last year nor did the FBI obtain a court order through the Foreign Intelligence Surveillance Act to monitor Trump’s phones. “For the part of the national security apparatus that I oversaw as DNI, there was no such wiretap activity mounted against the President-elect at the time, or as a candidate, or against his campaign,” Clapper said Sunday morning on NBC’s “Meet the Press.” Asked whether he could confirm or deny whether the FBI could have tapped Trump’s phones under the Foreign Intelligence Surveillance Act, Clapper was unequivocal. “I can deny it,” he said. “There is no FISA court order, not to my knowledge, of anything at Trump Tower.” I’m sorry, but is retaining the advice and representation of counsel a crime now? If it is then Trump is guilty as hell with Rudy Giuliani running around making a mess everywhere he goes.

I honestly can’t believe that so many of you are actually believing what Trump and his revolving door of “only the best people” are saying. What will happen when there is no evidence to support Trump’s latest tweet storming accusation against members of the former administration?

Will Trump get away with saying, “Nevermind,” ala Saturday Night Live? Or will this serious mess be the nail in his coffin as it answers for once and for all that he really is a paranoid, incompetent, fool, and needs to be relieved of his responsibilities?

I don’t see how he can rise above this latest catastrophe, because it is so absurd, and so unhinged to anyone with a brain.

I also wonder if someone put this elaborate conspiracy in his head so he would just screw himself and thereby put the odious Pence in office. Regardless, I don’t think the Russian link should be dropped just because Trump is taken to a nice place in a straight-jacket…which is going to happen.

FFS this is taking FOREVER!

They should throw these pieces of crap into Guantanamo

For what? I thought the whole thing is a hoax. Anyway, it’s Trump that’s going to be impeached.

If you actually believe what Clapper is saying then I have some beach front property to sell you in Arizona! According to your news source that you are watching tells me all I need to know who you are and how limited your mind works!

I’m sorry, but is retaining the advice and representation of counsel a crime now?

Where in this OP is it suggested that retaining a lawyer is a crime? I think you are missing the point and going on a different tangent in your response. Why would Brennan and Clapper need to retain a lawyer in the first place if they didn’t do anything wrong at all? Huh?

Why is the rest of your post about Trump and not actually talking about the crimes committed such as the FISA abuse, and illegal Surveillance under Obama? Do you liberals not know how to be objective when trying to find the truth or does that not apply because it was Obama committing the crimes? According to what you are rambling on about it seems you are short circuiting yourself by way of emotion from seeing the truth.

One thing I know for certain that I am willing to bet, a lot of you, including you will not be showing your faces here when you are proven wrong and have egg on your face!

I’m sorry, but is retaining the advice and representation of counsel a crime now?

Not when Trump does it

“Against the backdrop of the DOJ admitting FBI investigators never had access to the DNC servers to verify a Russian hack; and with new information about the FBI receiving partial and redacted analysis from Crowdstrike; the review by U.S. Attorney John Durham toward the downstream assessment/claims of the CIA takes on new meaning.

CTH has previously outlined how the December 29th, 2016, Joint Analysis Report (JAR) on Russia Cyber Activity was a quickly compiled bunch of nonsense about Russian hacking.

The JAR was followed a week later by the January 7th, 2017, Intelligence Community Assessment. The ICA took the ridiculous construct of the JAR and then overlaid a political narrative that Russia was trying to help Donald Trump.

“The ICA was the brain-trust of John Brennan, James Clapper and James Comey. While the majority of content was from the CIA, some of the content within the ICA was written by FBI Agent Peter Strzok who held a unique “insurance policy” interest in how the report could be utilized in 2017. NSA Director Mike Rogers would not sign up to the “high confidence” claims, likely because he saw through the political motives of the report.

Yes! But would you rather have, an iron clad case with compelling evidence to convince a jury to convict or something that is rushed that Democratic post modernists will use the double speak of relativism to poke holes to create doubt, which in turn will make the DOJ look foolish when they fail to get a conviction? Getting through the obstruction takes time unfortunately! The traps have to be set, put in motion for those giving testimony to the investigators. Remember the most important point in why this is true; it’s harder to keep a lie going than it is telling the truth. The former with passing of time tends to ensnare those who forget the details of the lies they told in the first place, unless you are Hillary Clinton of course, where she can just feign memory lapses as her excuse!

I disagree! I will gladly come back here to eat crow if your gut proves to be right! For the simple reason is the country can not survive if this corruption is allowed to continue and the standard rule of law that applies equally to everyone under it is not enforced!

Or will this serious mess be the nail in his coffin as it answers for once and for all that he really is a paranoid, incompetent, fool, and needs to be relieved of his responsibilities?

Madison concluded that impeachment was “indispensable” in light of the damage a rogue president could do, it also came with its own set of problems. Not least, impeachment might give Congress too much power over the executive. It might be invoked out of partisan mischief, rather than serious maladministration. Consequently, impeachment was made to be really hard to do.

The Framers were sophisticated men, who saw themselves as both students and victims of executive power run amok (as about two minutes’ perusal of the Declaration of Independence elucidates). They understood that governance would involve tussles between the political branches and episodes of overreach whether out of incompetence, malevolence, or urgency for which the extraordinary impeachment remedy would be gross overkill. Routine disputes involving the propensities of both the legislature and the executive to act outside their authorities would be handled by lesser remedies.

But then again, that was then and this is now as the house has decided that Tump must go.

Because you dislike Trump, and have a very low opinion of him, seems you advocate what the framers were trying to avoid. Imagine if the right would have moved against Obama with impeachment.

Given that only two US presidents in History have been impeached, none were ever forcibly removed from office! Nixon resigned before he could be impeached so he doesn’t count. Liberals are so desperate to find any sliver of hope that a smoking gun exists, that they are willing to make something up out of thin air for the sake of soothing their PTSD, TDS and HAAD, to which they are losing their souls!

Is it really all that surprising?

They keep the investigation in committees where the GOP has little power while marginalizing the entire Gap by not bringing it to the house floor for a vote.

The house GOp should leak very bit of information from the committee hearings for the entire country to see.

p.s. Pretty interesting how nothing is larked from the committees. Could it be that the democrats are the leakers and they do not want anything leaked to the voters?

Pretty interesting how nothing is larked from the committees. Could it be that the democrats are the leakers and they do not want anything leaked to the voters?

Of course they are the leakers. Schiff being the most egregious leaker of them all. He leaks like a sieve!

He was the one that leaked the Don Jr Testimony. Eventually and I hope it is soon, they will be caught if not already, and the timing is the only thing that is being held back, but Adam Sh*t for brains Schiff should face charges on several counts.