While the white man was building great civilizations all over the world for thousands of years what were the black people doing? The answer is nothing except drinking cow blood, and oh yeah I forgot, eating white people. Like when they staked down some white people and cut them open and were eating parts of their bodies while the whites were still alive. Who said blacks were human beings? Not me! Black people are not people of civilization, they are BROUGHT to civilization by white people.
Big mistake.

Yes, that is correct.

Nonetheless, I beg to differ on cannibalism.
Some cultures practice cannibalism out of the respect for the deceased. (They want to emulate the wisdom, courage, etc., of the deceased by partaking of their flesh or blood)

Of course it is a different story when Hillary and her ilk killed children and drank their blood.

I think we just hit on common ground there Didge when you spoke of Hillary and her ilk killing children and drinking their blood, now that I can believe. How did you come by that information about “Killary”?

They were busy believing that Wakanda is a real place.

It’s a no brainer.
Child sacrifices have been practiced by satanists for thousands of years continuously. Just like your candidate said “Some black woman’ stocking shelves”

Are you replying to me when you say “your candidate”?

Trump and Biden are your candidates.

Who the hell do you support? Hitler? Let me make it clear… MY candidate didn’t say that. I probably won’t support your choice because I’m not a racist piece of shit that hates ■■■■ and black Americans.

It seem to matter to blacks . Why not ALL LIVES MATTER ? Why all the assaults on whites of late ?

There are 43 million black people in America. How many have committed assaults? We need to stop painting with a broad brush. Some people buy into the BLM bullshit because they don’t know the facts behind the organization. I’ve changed 3 minds at my office on them already, just by pointing out factual data. Most of the idiots supporting BLM are white Liberals.

We need to stop painting with a broad brush.

Give me a fucking break with that bullshit !! Blacks have the largest brush in the entire World !!! Sir I’m white and was never fucking privileged , I never owned slaves , my parents and grandparents never owned slaves . I was never ahead of a black in Appling for a job or a college . I have been told I scored the highest on a test to get a job BUT the employers said he HAD to hire a black man SORRY . The test was two full days , just wish I was told I was wasting my time .
The local police and fireman jobs were only hiring minorities regardless of test scores -NO NEED TO APPLY .
So the broad brush doesn’t seem to apply to law enforcement and blacks right ? There are over 800,000 police officers in the US exactly how many black were killed wrongfully ? In all shooting by law enforcement 62% were white and those shot by police, 24% are Black . So blacks care about blacks and whites are not allowed to care ?
I’m waiting for the white tv channel , the white beauty pageant , WET , WHITE-ISH , WHITE LIGHTNING , DEAR BLACK PEOPLE , WHITE MONDAY , # WHITEAF , I’m certain we would ALL be ok with that right ?

NO, a very small minority of blacks paint with that brush. Open your eyes and look around just a little. I interact with black people every day and the only difference between myself and them is skin color. We have FAR more in common than we are different and I’ll not allow a few loud mouth shit bags to change the narrative. MOST black people aren’t hyper focused on the 1800’s, it’s just the few that do are noisy as hell and guilt laden white liberals amplify that voice. Black Americans are waking up slowly and realizing that the left is fucking them over and as they move right, the voices on the left get louder. Ignore those voices.

As to the broad brush, YES, it applies to everything. NO, most cops aren’t corrupt. NO, most blacks aren’t violent. NO, most Republicans aren’t racists. . . we need to stop giving power to the media and allowing them to set the narrative. Point out the loud hateful voices for what they are but when we speak of this, we need to not be guilty of what the left does when they start talking about an “epidemic” of police shooting black males. We know that’s absolute bullshit, just like it’s bullshit to think that most blacks are ok with garbage like blaming ME for the crimes of Liberals more than a century ago.

13% of US population make up one half of the US prison population?
And how many black males are ex-cons (who did time in prison for violent crimes)?

That’s what you call

a very small minority of blacks

Nope. Your numbers are not only incorrect, they’re grossly distorting reality. 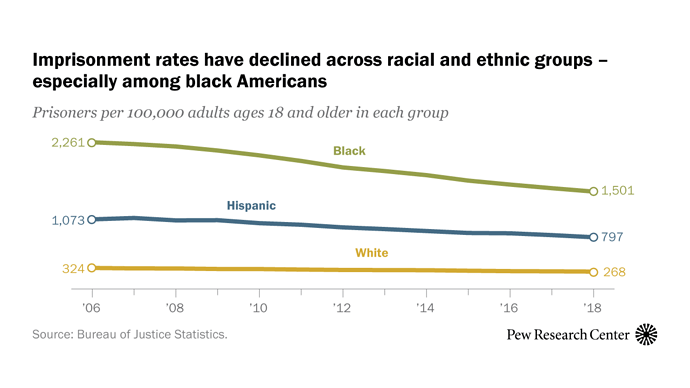 Black imprisonment rate in the U.S. has fallen by a third since 2006

33% of the prisoners in America are black. They represent 12% of the adult population. HOWEVER, let’s delve into the actual number per 100,000. Only 1.5% of blacks are incarcerated which means 645,000 black people out of 43,000,000 are incarcerated. You’re associating them by just race though, which is as ignorant as it gets. Why not account for income? Education levels? Single parent households. . . you know, things that can actually PREDICT how likely a person is to be incarcerated? If you look at the white populations in the same areas, the incarceration rates are identical to black populations when accounting for other variables. It isn’t the skin color, it’s the utter failure of Democrat policies that encourage single parent households. Unemployment. Piss poor schools with no choice. The color of your skin has exactly ZERO to do with your propensity to break the law, it has far more to do with failed government policy. How do we know? From 1865 to 1930, blacks made HUGE advancements to become part of the middle class. The racist asshole FDR managed to set up a system that turned a lot of black communities back into slaves, dependent on their masters for a living. They passed policies that encouraged single parent households and a slew of other things that led to a deterioration among minority communities.

33% of the prisoners in America are black

Fine. It certainly is NOT “a very small minority of blacks” as you claim.

The rest of your post is a very LIBERAL apologist argument.

Not that I didn’t already realize this but you’re a fucking dunce.

1.5% is a SMALL minority by definition. Second, I’m ATTACKING Liberals and liberal policy you clueless twit.