This is both pretty hilarious and ironic at the same time when reading this story. Apparently from the onset rash of recent smash and grab robberies in affluent neighborhoods in Holly and Beverly Hills all of a sudden a panic is suddenly setting in that has many seaking private security and hoe defense solutions such as the purchases of firearms.

[Beverly Hills] – In Beverly Hills, even the purchase of a firearm comes with certain…expectations. The city’s only gun store, Beverly Hills Guns, is a “concierge service” by appointment only, for a largely affluent clientele. And business is booming.

Since opening in July 2020, the store has seen upscale residents from Santa Monica to the Hollywood Hills increasingly in a panic following several high-profile smash-and-grab and violent home invasion robberies. The apparent siege has brought in a daily stream of anxious business owners and prominent actors, real estate moguls and film execs, says owner Russell Stuart. Most are arming themselves for the first time.

“This morning I sold six shotguns in about an hour to people that say, ‘I want a home defense shotgun,’” says Stuart, whose store is discreetly located in a Beverly Hills office building, with no sign on the doors, down the hall from a diamond dealer. “Everyone has a general sense of constant fear, which is very sad. We’re used to this being like Mayberry.” (read more)

This is an interesting angle to elections having consequences.   Apparently, the ultra-wealthy and affluent in Beverly Hills are rushing to purchase firearms at a jaw-dropping rate as they no longer feel safe.   It’s worth reading... That was awesome! Enjoyed every minute of that one!

What is going on here has Dr Manhattan been hacked???

Hey guys Manhattan here, don’t take this the wrong way but I want to see your Cocks, please send them in messenger 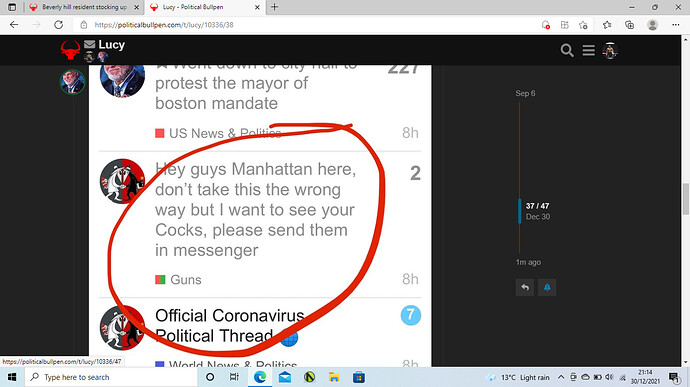 jizzwizz is the one that changed it. Don’t pay attention to this loser! When one has to resort to shit like this its more indicative of an insecure person needing to compensate for their obvious self loathing in life. It’s what racists do and how they roll!

See how he victim blames? He sends me perverted messages then says I deserved it. Sick

Only real scum bags has to resort to making up fake memes and changing a persons post! You are a fking loser. The moderators know too!

Hey what ever it takes to keep those creepy emails you keep sending me to stop!

Hey what ever it takes to keep those creepy emails you keep sending me to stop!

Hey asswipe, the moderators know that is a lie too so you should stop you are embarrassing yourself! I don’t have to make shit up or high-jack other peoples posts to make a point, but you do! That is what scumbags like you do! Now fk off!

Ok monte keep crying to the mods… you start shit here and can’t handle the back fire. Here is some advice stay in your lane. Leave the big dogs alone

Hey dick breath you are not a founding member here, I am. Getting you banned from here would be the best thing to happen. No one here likes you! When you start altering other people’s post that is a step too far! I also didn’t start this, you did, so you can stop being a duschebag and start being honest with yourself! Big dog you are not more like a Chihuahua is what you are!

you want me banned because I kick your fucking ass lol your dumb ass thinks Jones is going to win… lol take a hike. you want to be a provocateur but can’t handle it back… like most democrats

No I want you banned because you are violating the rules here by altering other people’s posts you dumb witted fucktard! I could careless about the other stuff, I can take the ribbing, but because you are such a low life racist scumbag and can’t come up with anything original you resort to making shit up! Now go fuck yourself!

You altered my post also. So should you be banned?

No I did not alter your post! Another lie on your part! No surprise there, after all scumbags like you have no integrity!

Yeah and you started it by putting together false memes claiming I sent you private messages. More lies on your part! BTW, you can’t call the FBI on me dumbass so I have you beat there.