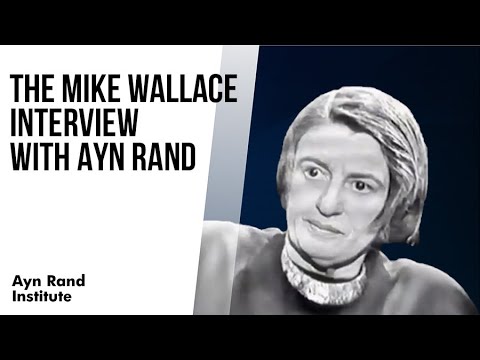 I love Ayn Rand, amazing woman, of course the Leftists HATED her and still HATE her.

BTW Ayn Rand was also a Joo but she was a Right-Wing Joo and as they say even a stopped clock is right twice a day. Ayn Rand (/aɪn/; born Alisa Zinovyevna Rosenbaum;[b] February 2, [O.S. January 20] 1905 – March 6, 1982) was a Russian-American writer and philosopher. She is known for her two best-selling novels, The Fountainhead and Atlas Shrugged, and for developing a philosophical system she named Objectivism. Born and educated in Russia, she moved to the United States in 1926. She had a play produced on Broadway in 1935 and 1936. After two early novels that were initially unsuccessful, she achieved fa Ra...

Mike Wallace POS son Chris Wallace is literally even WORSE than his father.

This video is like gold the intelligence is amazing, the way she explains things

Yes it’s a great shame that we don’t have any Ayn Rand’s around now, we could use a few or a hundred.

The Left in general have always hated the woman, naturally as the Left are morons, they consider Ayn Rand literally a Nazi, certainly they consider her a Fascist, they do this because as we know the Left have absolutely no clue WTF they are babbling about and just throw these names like “Nazi” and “Fascist” around at ANYONE who goes against their goofy beliefs.

I have bookmarked the Ayn Rand interview and I’ll watch it later, I don’t think I’ve seen it before, thanks for posting it, she was a very very great woman.

The biggest take aways for me when reading Rand are more profound thoughts on basic human freedoms. It then gets to a more philosophical contemplation than one put into practice and fought for. A man or Women’s labor is their own and those who seek to control the levers of commerce then become the opposition. The argument from her detractors ie: the communist left, is always humans are a social species. When compared to other animals living on the planet, we are nothing alike because we have rationale. However posed in those terms, we seem to deviate from our connection to nature and God where basic human instincts to survive has become a contrived construct of codependency and not one created from our own individual creative powers. Animals fare much better than the human species does in the current day dispositions to which we become disconnected with each days passing.

Lucy, judging from some of your posts, you will be sad to learn that Ayn Rand’s philosophy leaves absolutely no room for God or religion.

“Man—every man—is an end in himself, not the means to the ends of others. He must exist for his own sake, neither sacrificing himself to others nor sacrificing others to himself. The pursuit of his own rational self-interest and of his own happiness is the highest moral purpose of his life.”

I think her philosophy makes room for all faiths to adopt. She lays out logical reasons. I think no god is what she believes. But I can still be selfish and believe in god and have value in religion

She was a brilliant woman, and I thoroughly enjoyed Atlas Shrugged, though it’s been a while since reading it.

My problem with Rand is that, like other utopian ideals, it never works in the real world. Selfishness will never lead to a perfect world, regardless of how eloquent or convincing such a narrative may be.

Utopian ideas? Sounds like you have a reading comprehension problem. It’s anything but being about a Utopian idea.

Galts Gulch was her fictional utopia

Yeah nice reach on your part, and it’s obvious your conflating in an attempt to discredit what her actual point was.

Capitalism and the free market will never solve all our problems. The idea of the pursuit of self-interest as the highest moral principle, is as flawed as it sounds, regardless of how brilliantly it was described by Rand. She followed her false assumptions to their logical end.

Well take a look at areas of America that now look 3rd world… are they Rand’s ideology?

Again you are missing the purpose of her work and interpreting it with a linear perspective. It’s a philosophical appeal to personal constitution vs. the ever increasing overreach of collectivism and overcoming obstacles without the need of dependency in order to achieve a higher station in life.You simply want to view everything as a monolithic construct and you just proved it by throwing around terms like capitalism and free market as being external factors in solving problems. You are not only wrong but you simply don’t get it. Not surprising most liberals are not adept at grasping ideas of being self reliant and less Government because it doesn’t fit their dogma of wealth redistribution narratives that has proven time and time again to have failed. Keep trying little fella because your obviously too steeped in your ideological perceptions to actually understand human nature and self determination in what those concepts really mean!

She thought that altruism is a disease imposed by society that goes against our very nature.

She was wrong, of course. The desire to help others is part of our nature as humans. It’s also a big part of why we have been so successful as a species. It’s easy to agree with her philosophy though, if you accept her premise

False causation Jitss. Those areas are not struggling because of the social programs. Their problems can be traced back to white flight and systemic discrimination of black communities by government and financial institutions

Again having a debate with you is like talking to a block head. You are again trying to plead a losing case on something you are out of your depth with. Altruistic views is indeed a disease and history is replete with examples. It’s is you that is simply wrong and you fail in almost every aspect in your rebuttal to actually acknowledge your illiteracy on the subject matter on hand. You are entitled to your opinions but not your own set of facts. Reading comprehension is definitely not your strong suit when understanding a philosophical point of view. I suggest you try taking up knitting instead than trying to discredit an author that has outlasted the most ardent critics of her time and certainly will outlast your piffy little commentary’s the same.