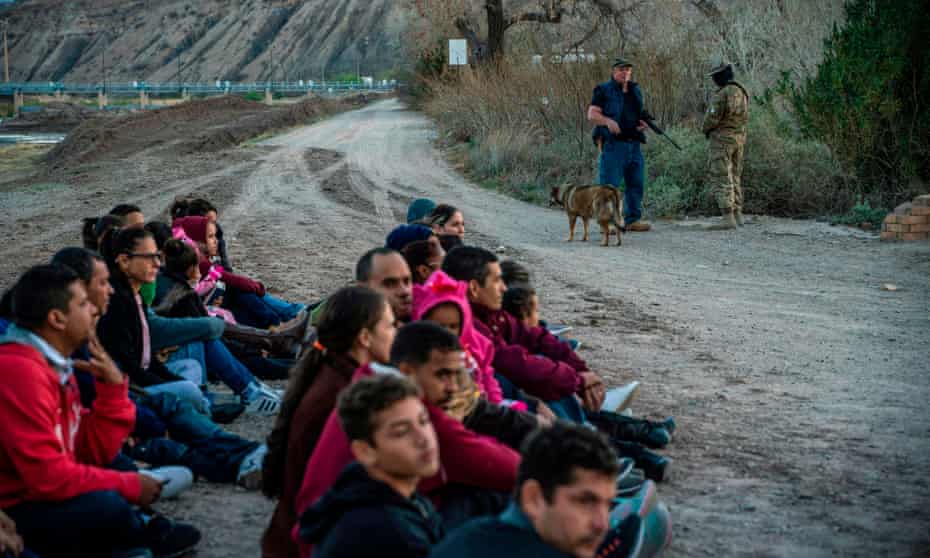 The modern day version of “The Minuteman” group doing the job that American government politicians and bureaucrats absolutely refuse to do. This is a citizen’s arrest and is perfectly lawful.

Read this leftist bullshit from the Communist Guardian and the ACLU: American Communist Lovers Union below:

Armed rightwing militia members detained a large group of migrants at the US-Mexico border and coordinated with US border patrol agents to have them arrested, according to the American Civil Liberties Union, in a series of actions the civil liberties organization called a “kidnapping” and a flagrant violation of the law.

Several videos taken at the border in New Mexico this week appeared to show men belonging to a group that calls itself the United Constitutional Patriots approaching migrant families and children, ordering them to sit down, calling federal agents on them, and at one point potentially misrepresenting themselves by saying “border patrol” as they approached.

“The Trump administration’s vile racism has emboldened white nationalists and fascists to flagrantly violate the law,” the ACLU of New Mexico said in a letter to the state’s governor and attorney general, urging them to “immediately investigate this atrocious and unlawful conduct”.

The ACLU described the group as “an armed fascist militia organization” made up of “vigilantes” working to “kidnap and detain people seeking asylum” and accused the group of directly making illegal arrests.

In recent years, there has been a reported surge in paramilitary groups and xenophobic activists having a presence at the border in an effort to target undocumented people. 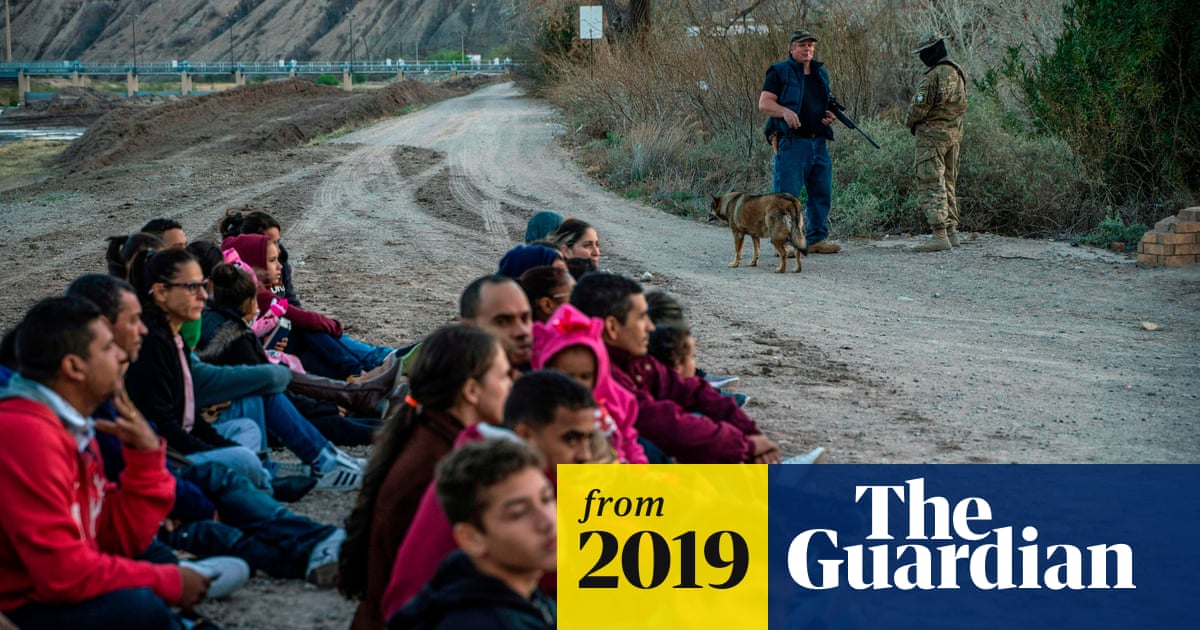 Maybe the ACLU should head to the border and confront the militias and tell them to stop. I’d pay good money to see that.

I wish I didn’t live so far away from the southern border. I would gladly spend my weekends doing this. It would be good to find out the names of the groups who are organizing this so we can send our support and spread the word.

Do you guys remember that “foreign and domestic” part of the oath of enlistment? 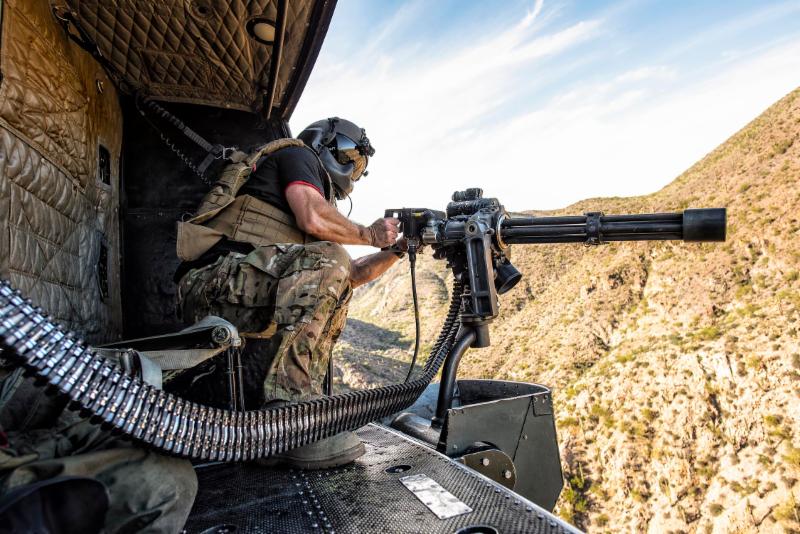 In the picture they look calm… like they are just waiting in line for their free steak dinner, medical checkups, vouchers for rent, and consultations with lawyers.

That’s why picking them off before they cross the border is a better idea.

Talk is cheap! You should go down there and do it yourself!

Says the guy shitposting from somewhere in Asia.

To be more clear, I’m advocating for our government to do that on our behalf. We enforced our border just like that less than 100 years ago. We have every right to use deadly force. It will never happen though.

That’s why I am preparing myself and my family for the coming collapse and the establishment of a micro ethno-state.

Then you should say that instead of talking smack all the time! BTW, I served my country in 3 different theaters so eat your own shit-post you have nothing on me!

I don’t care where you served dude. I did my time in OEF/OIF. Who cares. Stop bringing up your veteran status and military record to prove a point. It makes you look like a weak pussy.

No you fuck tard! I earned the right to be anywhere in world I want, so stop being dickhead and trying to use against me as if you want sound like your tougher, because you sound anything but!

I am just pointing out that the country is the way it is is because generations of Americans were too busy with consumerism and have become apathetic! Always expecting someone else is going to do it for them, only now they retreating to their tribal trailer park camps getting ready for the doom and gloom collapse. In essence we created this mess! We allowed it to happen!

I wasn’t trying to. I proposed a solution and responded on point.

Then the Commanding General of the Army of Native American Expatriates decided to post absolutely nothing of value in an attempt to pick a fight with me over my proposed solution to the border crisis in the country he abandoned. Then he felt obligated to get into a dick measuring contest. I forgot to bring my scalps so I couldn’t give an accurate count.

Like I said for as much you try to label me, you are just as big of a hypocrite for being complacent. How brave of you to be such a keyboard warrior!

Thank you for acknowledging my bravery. It’s an honor to be recognized by the Commanding General of the Army of Native American Expatriates. Your willingness to do so reflects great credit upon yourself and your sovereign tribe.

What? You think throwing out racial insults makes you sound anymore intelligent here? You got that ugly cancer inside you and I guess you really are projecting here when you have to resort to such narratives! Bravo! Go ahead and eat your hate!

What was racist about my statement? You are a self-proclaimed Native American, like Liz Warren. You are an expatriate. With your record of military service in multiple theaters and your ability to live anywhere you choose, I assumed you were the Commanding General as rank generally affords the privileges you describe. If I got your rank wrong please feel free to adjust my SA.

Oh I don’t know maybe referring to Native Americans with counted scalps and making derogatory comments about my race is actually making racial insults! So mature on your part huh? I digress.
I am not a self proclaimed Native American, I am Native American, unlike Liz Warren. As far as my military service it has nothing to do with me living overseas except I have earned the right to live anywhere I choose, and it does not make me Un-American but nice of you to use that as a false equivalency by using words like “expatriate” (I am anything but,) so you can deflect from your own deficiencies as a human being, as you made that abundantly clear so far! You send out the words, you own them, maybe Sunday you can reflect on them more to see yourself! BTW, I never was a general, but I guess your sarcasm is screaming for the hurt to go away of painful memories of your upbringing that you have to resort to such original retorts! You must be a real joy to be around! Spit!

So your military service has afforded you additional privileges regarding your immigration status in other countries? Interesting. I need to talk to the VA. I might be missing something.

I don’t care if you think I’m racist. You already have your own ethno-state. Your bleeding heart comments about not picking off illegal Invaders means to me that you are enabling white genocide.