I hate to say it but I wonder if brick and mortar libraries all over town are becoming a waste of money in consideration of advances in digital media, digital literature and online learning.

I haven’t estimated the numbers but I wonder would if it would be cheaper to have one central library that’s easy to get to like downtown in every city and in the basement house servers that the public may access by logging in on their PCs, tablets, e-readers and video streaming devices of everything in the library and more. Would it even be cheaper to subsidize or even buy everyone or at least fulltime students an iPad or similar device every several years? My biggest concern is I do believe some people need to leave their environments and find sanctuaries for learning because of drama, etc. going on in their homes.

Paper media, in general, has become much less popular since the advent of the e-reader. I was quite saddened when Borders closed down - I have fond memories of reclining in their fluffy chairs, reading for hours accompanied by the smell of coffee wafting over from the hipsters in the corner.

I doubt that the use of paper books will ever die, though, so long as there are humans left to read them. The value of e-readers, tablets, and laptops in situations with no power quickly plummets to zero.

I hate that they are, but they are. There are fewer libraries now than there was a decade ago (at least where I live). People are using computers for everything a library that people used to normally use a library for…studying, internet (of course), and reading. I will say this, library’s hold so much information that computers and the internet do not have, and that you really can’t find very well. Just looking around the stacks, you can look at book covers/titles and something just might jump out at you. I second the fact that people need to leave get up from their computers once in a while and leave the drama at home. Libraries are known for their peace and quiet.

I will say this, library’s hold so much information that computers and the internet do not have, and that you really can’t find very well.

There are a lot of things which still can’t be found on the internet. Detailed information on mathematics, for example, simply does not exist, and the historical material that can be found online is nowhere near as in-depth as a library unless there’s somewhere which I am not looking that I should be.

There are a lot of things which still can’t be found on the internet.

And I’m with you on that!

The fact that most people can’t be bothered to open an actual physical book does not mean those historical tomes should be unavailable to the world. A billion pages in the stacks are simply not available digitally, and probably never will.

One EMP burst and we will lose at least 90% of all digital information, the internet, the power grid and any access to the servers that remain.

For that reason alone it makes sense to maintain libraries.

Now, public libraries need to continue to adapt to the modern age and provide interlinks via the internet so that users can access documents and old manuscripts from all over the world but they definitely continue to serve a valuable purpose.

And that doesn’t require a nuclear attack to do that. The Sun is quite capable all it’s own to wipe out all exposed didgital data and the machines that read it.

No question about that. I still vividly remember the disruptions from the big CME in the early 90’s that raised total hell with communications after knocking out several major comm satellites and disrupted a considerable chunk of the electric grid as well.

Our own sun is certainly capable of doing much more damage than anything man has ever invented.

The very thought of my e-reader ‘dying’ fills me with horror; I honestly couldn’t live without it, and I’ve had one since the very first Sony hit the market. (would that be about 20 years ago?) I even have a locked-and-loaded emergency e-reader just in case the main one fails, or I accidently let the battery go flat. I find that most paper books are too heavy to read in bed - and when I doze off and it drops on the floor, it wakes me up, then I can’t get back to sleep again!

Don’t worry. If a CME knocks out your e-reader, you (and everyone else) will have much more to worry about than reading e-books. All of your electronics, including your car, will be irreparably non-functional. It would probably take years (and untold $billions) just to restore the nation’s power grid.

The estimates I see are at least a decade and during that period 80-90% of the population would die.

Sure would do a lot for land prices though!

Do you have any evidence for that?

A massive EMP or CME will fry every integrated circuit on the planet that isn’t protected by a Faraday Cage, or similarly protected. 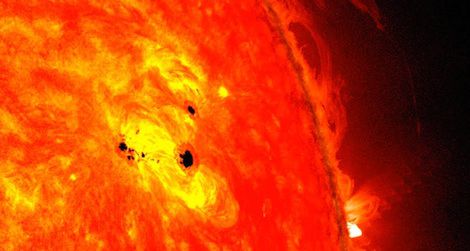 What Damage Could Be Caused by a Massive Solar Storm?

An enormous solar storm could short out telecom satellites, radio communications, and power grids, leading to trillions of dollars in damages, experts say

Do you have any evidence for that?

None that you are likely to believe.

I’d better check out Amazon for a Faraday Cage asap then. My e-reader obviously won’t be safe in the drawer of my bedside unit. How about bubble-wrap though - will it be okay in bubble-wrap during those massive EMPs and CMEs? Why does life have to be so bloody complicated!

You asked, we answered do with it what you will.

But ‘could’ isn’t the same as ‘would’, meaning that it might not? I’ll try the bubble-wrap first and put the Faraday Cage on the back burner. Watch this space?

“Could” means with a large enough CME or EMP it will happen.

It is a certainty that at some point one or both will happen, it may be next week or a billion years from now.

We’re doing what we can to harden the grid here in the US but it’s a massively time consuming and expensive project that will take decades.

Nothing however will protect the digital networks or devices we rely on.

Maybe this is the first you are hearing of it, but it is an actual threat.

Protecting our electrical grids is possible and it would be smart for the country to do so. Yet, we’d rather waste money on other less practical things. Newt Gingrich has been an advocate for years for trying to get the grids protected.

While the EMP commission is finished, its proponents aren’t giving up. In congressional testimony last week, the EMP commission’s former chief of staff, Peter Vincent Pry, urgedlawmakers to take the threat seriously, repeating an earlier warning that an attack that took down the U.S. electricity grid could kill 90 percent of Americans.

“North Korea has the capability to make an EMP attack. Right now,” he said.

The enemy dictatorship could launch an attack with a single weapon affecting all of North America, taking down electrical grids, transportation, and communications, he said.

While some experts have questioned the likelihood of a North Korean EMP attack, arguing the concern should be a solar storm that could wreak similar devastation on the electrical grid. Steps to harden the electrical grid and other vulnerable infrastructure against a solar storm would also help protect against an EMP attack.
https://foreignpolicy.com/2017/10/16/the-trump-administration-has-no-plan-for-dealing-with-a-north-korean-emp-attack/