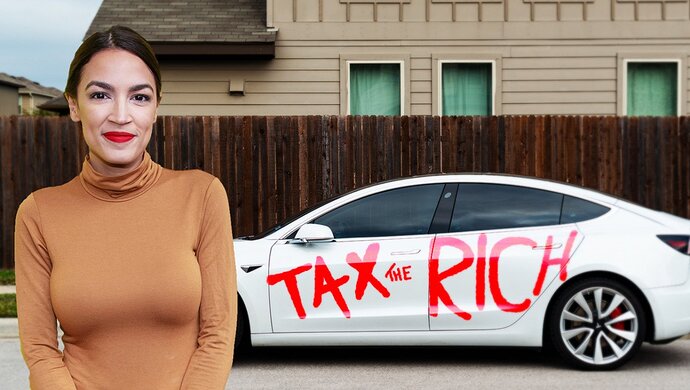 WASHINGTON, D.C.—Representative Alexandria Ocasio-Cortez took the fight to tax the wealthy to the streets today with the unveiling of her custom-made, $100,000 “Tax the Rich” Tesla.

The limited-edition, high-end electric car sports a custom “Tax the Rich” decal designed by a wealthy millionaire socialist. Ocasio-Cortez says she hopes it will make a “powerful statement” about wealth inequality in our society while she’s driving around town or illegally parked in front of Whole Foods picking up $8 kombuchas. Only 500 of them will be released, as it’s “very exclusive” and “only for people who are very, like, serious about taxing the rich and who can afford it. We don’t want riffraff promoting this message, you know.”

“We need to like, tax the rich, and, like, make sure they pay their fair share,” AOC said to reporters as she unveiled the custom car in front of her posh D.C. apartment, complete with leather couches, expensive rugs, and even a garbage disposal. “When I’m driving through D.C. to my appointments with rich lobbyists and stuff, I’m totally going to just massively own the rich with this thing. They’ll be like, ‘Oh man, she’s right! We should be taxed!’ as I fly by them in the express lane.”

After her team-up with Tesla to release the custom model, Ocasio-Cortez says she is working on a custom “Tax the Rich” Bentley, a “Tax the Rich” Gulfstream, and a private island terraformed to read “Tax the Rich.”

It would be nice if some black gangsta would steal her car.

I can’t stand that woman but she does have a great set of tits. What a waste.

Alexandria Ocasio-Cortez is a hypocrite. If you’ve been paying any attention to her Twitter feed, then you’d know that. AOC has a thing for saying that the sky is falling. She’s an alarmist. So she’s convinced that the end is nigh. But she’s been wrong about everything else – and for someone whose entire identity is in making wrong statements, that makes her a hypocrite. She’s in the process of reinventing herself, which makes her a hypocrite of a different sort: she’s a hypocrite with her principles.

“If Democrats didn’t have bad character, they’d have no character at all.”

Alexandria Ocasio-Cortez does have nice milkers. Like those of a dairy cow.

she does have a great set of tits

And teeth like a wild beaver that could chump down a mighty oak !

Alexandria Ocasio-Cortez uses her breasts to get attention. She uses her legs to go from one interview to another. And when she’s talking about gender politics, she uses her gender itself to prove a point. Her breasts have been on display since she was a freshman at Boston University. But after an interview with Vanity Fair and the publication of a profile of her, it became clear just how much the left-wing congresswoman depends on her feminine presentation to generate attention and advance her career.

At the time of the interview, Ocasio-Cortez was an up-and-coming candidate to be a spokesperson for New York’s socialist movement. Yet the Democratic socialist hadn’t made a big splash until she announced her candidacy for the Bronx’s 14th congressional district and posted a photo of her campaign sign on Facebook that featured only her torso. Ocasio-Cortez, the New York Times said, “was quickly catapulted to celebrity status” and “her breasts—which had not been so ostentatious before—were transformed into political symbols.”

She’s been a major talking point in the media since. She had a large profile piece in the New Yorker, a book deal, and multiple appearances on the Sunday shows. But it was the photo on the campaign sign that got the attention and made her a household name. “A lot of media,” Vanity Fair wrote, “were convinced that AOC’s success—that she had become a media magnet with little obvious reason—was due to her new found fame as a sexual object.” Vanity Fair asked, “What is it about her looks and her body that allows her to command an audience?” The journalist said, “There are so many people, men and women, who seem to believe that they can be powerful and make their presence known only by using their sexuality.”

Ocasio-Cortez has spoken openly about body image and how she tries to take care of herself. She said she was bullied as a child, growing up in the Bronx.

“I remember being in elementary school and having a girl come up to me and say, ‘You don’t have a body. You don’t have boobs. Your clothes don’t hang right. You’re ugly,’” she told Vanity Fair. Ocasio-Cortez was 11 years old at the time. “And I remember being in tears. I’d gotten my period for the first time, and it’s like, this is my body and this is what is supposed to look like and people don’t like me.”

The Vanity Fair piece included some pointed advice. “She is also not immune to sexual objectification,” the journalist writes. “She was a girl who, if it were possible, would have liked to have been a model, who was often sent fashion pictures by her father, who told friends she ‘didn’t look like a politician.’”

The face AOC made when I told her I cheated on her and rawdogged her little gay brother. 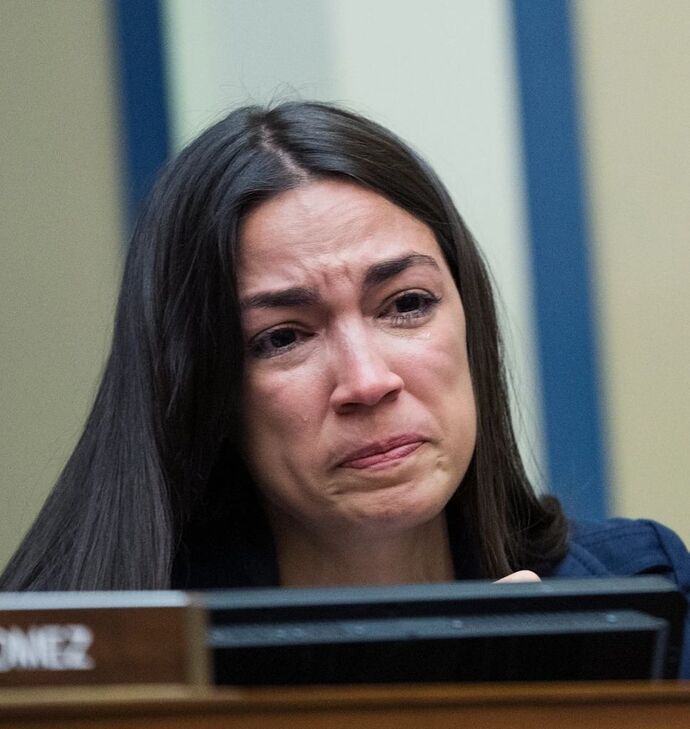 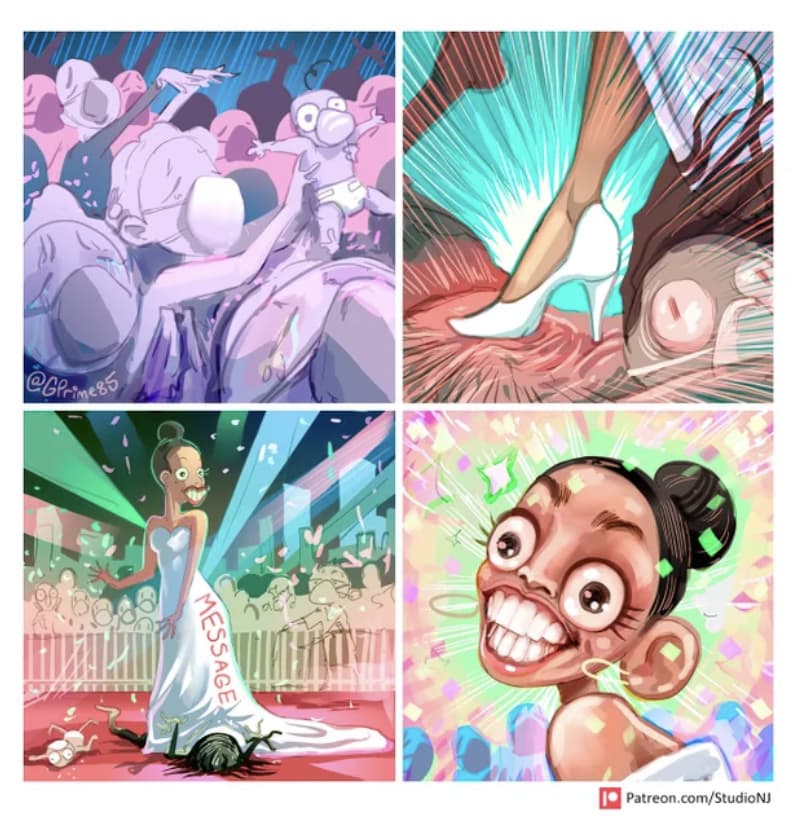 She’s like Sword Swallower Harris . Both use their gender for advancement and " use thrir legs going from interview to interview "

Why are they wasted???

The face Trump made when she kicked him in the nuts… 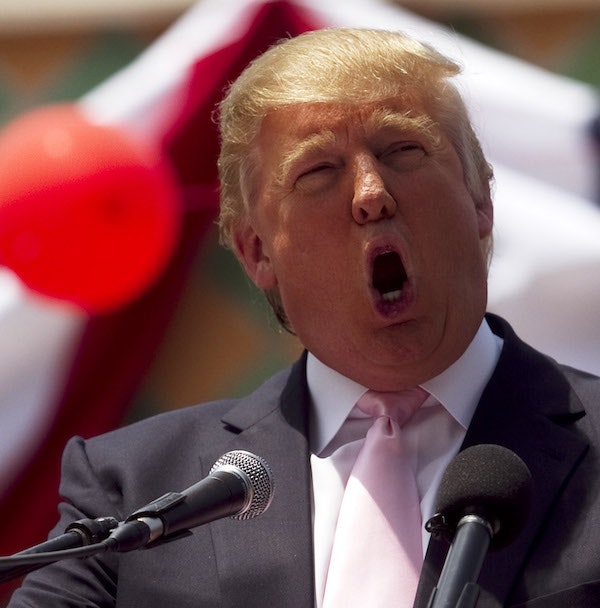 Count of Monte Bluster, you have have the BALLS of an Elephant to BITCH at me about insulting others !!!

Other POSTERS. Public figures are fair game. Maybe one day you people will get this figured out….

Ok - I know that this is a satirical post about the dress that AOC wore to the Met, but let’s apply some reality to things.

The Met gala is spendy benefit, but it’s a nonprofit benefit that raises a shit ton of money for the arts, which have taken a huge hit in donations between covid and the Trump tax debacle. I’m perfectly ok with AOC developing relationships outside her original bubble. If you want to poke fun at that go ahead…but raising some money for the arts is a good thing.

The arts only helps rich ppls kids. No one like the arts

Oh bullshit. Back that statement up with fact.

You are just pissed that AOC is young, beautiful and high-profile. Whatever she wore would be photographed and talked about. Half of Congress could have gone and never been noticed.