Antifa Member Killed By Police After Opening Fire On Officers

Civil war incoming. Kobama Harris will capitalize on this and run on the “police brutality” ticket. Expect a tumultuous time next year. Eugene, Washington –-(Ammoland.com)- Charles Landeros, 30, was fatally shot in the head by officer Steve Timm at the middle school of his daughter. At the time of the shooting, the leader of the Antifa militant group “Red Arm” and founder of “Community Armed Self-Defense” was at the middle school resisting arrest. Landeros at the time was involved in a custody dispute with his former wife. He was wearing a “smash the patriarchy” shirt at the time of the shooting.

Landeros was not only a leader in the Far-left militant group out of Eugene, Oregon, but he also was the chief firearms instructor for the organizations. The stated mission of the group is to, “defend the oppressed.” Landeros, who identified by non-gender specific pronouns, had a goal to teach and form an armed group to protect members of the LGBTQ+ communities, as well as communities of various cultural backgrounds considered “oppressed”.

The secondary goal of his “Red Army” group was the overthrow of what it sees as a fascist government and the installation of a far-left communist regime in the United States. Landeros has been involved in several violent protests around Oregon protesting things such as perceived police brutality against people of color and people who identify as LGBTQ+.

School officials asked Landeros to leave the property when he refused to leave the grounds the school staff called a resource officer. Officer Steve Timm responded to the call and once again requested Landeros to leave immediately or face arrest for trespassing and disorderly conduct. He still refused to leave, so Officer Timm called Officer Aaron Johns for back up. The two officers tried to get Landeros out of the school, but Landeros became combative.

It was at this point where the officers informed the member of Antifa that he was under arrest. Landeros pulled out a 9mm handgun and fired two shots at the officers. Officer Johns tried to wrestle the gun away from Landeros. When the two hit the floor struggling for the firearm Officer Timm fired the fatal shot to the head of Landeros killing him instantly.

Police released the body cam footage to calm unrest in the Antifa community. The footage seems to show that Officer Timm was left with no choice other than shoot Landeros to protect the other officer. It doesn’t give a clear reason why Landeros would pull his gun and provides evidence that the officers were not overly physical with an individual trespassing on school grounds.

Lane County District Attorney, Patty Perlow, said that the officers acted correctly and that the use of force was justified.

“There was no clearer circumstance that the use of deadly force is justified than this,” Perlow said.

“It is unknown why Charles Landeros chose to use deadly force in this circumstance, but he clearly had no regard for the lives of the police officers or the students or staff present, including his child,” said Perlow. “Officer Timm saved the life of Officer Johns, himself and perhaps many others given the number of rounds Charles Landeros had loaded in his weapon.”

Landeros also had a backpack full of ammunition of different calibers.

All of which were banned on school property because it was a gun free zone. Landeros must have willfully ignored the gun-free zone or was not aware that the school banned guns.

The FBI also investigated the shooting of Landeros and found that the officers didn’t commit any crime and were justified. Landeros was known to the FBI because of anti-government threats posted to the social media. Just days before the shooting he made a post calling for the killing of police officers.

Supporters of Landeros do not believe the shooting was justified. Lauren Regan of the far-left Civil Liberties Defense Center said that their organization would hire outside experts to review the shooting footage. Landeros was of Mexican and Filipino descent. She believes his ethnicity played a role in police deciding to use deadly force.

Based in Eugene, Oregon the Civil Liberties Defense Center is a non-profit law firm. The group has ties to Antifa groups throughout the region. Their mission is ‘to protect the rights of activists and marginalized communities.’

Landeros was an Army vet who served in Iraq and Afghanistan, according to friends.

Johns has served as an officer since 2001 and Timm has been a member of the department since 2004.

A member of the radical group, Antifa, arrested for trespassing on school grounds was shot dead by police after pulling his gun and firing at the officers.

Hmm…how did the gun even make it into the school? Didn’t leftists make schools gun free zones already?

They didnt define the school as a cray-free zone, bc that would be ground for lawsuit according to the Americans with Disabilities Act.

Jokes aside, Im jsut glad no one was injured except the perpetrator.

This is how it starts! The first shots fired by ANTIFA in the upcoming war. ANTIFA is one step away from causing a much wider conflict when the next time they show up to a protest or rally and decide that they are going to use guns. We need to be ready for these lowlife degenerate scumbags!

That’s one of the nut jobs out of the way. The Police officer should get a medal

1 down…few thousand or more to go.

If they start shooting civies in Portland, the mayor will tell the cops to “stand down and see if anything bad happens”

Yes, the Mayor was already doing that! Hell if he doesn’t have blood on his hands already he will soon enough!

If they start shooting? Brother they won’t start shooting. They’ve been getting overtime to protect the protesters from the ordinary citizens whose property they’ve been damaging. The last police chief who actually arrested them for that was promptly fired and replaced.

Oregon is like Antifa central. Bonkers but not unexpected.

Another One Bites the Dust!

They’re not from here. They’re all transplants from either California or Seattle.

Kate Brown the current governor of Oregon, moved here from Colorado. While the media claims Oregon re-elected her, she was not elected to the Governor’s office after Kitzhaber left, rather she was appointed, Oregon only does mail in ballots, and I have not met a single person who actually voted for her. (And I work in the Portland metro area.) She was also born in Spain. Which explains some of her awful ideas.

Hey Wiley! Are they still doing the “bite of Portland” festival every year?

They’re not from here. They’re all transplants from either California or Seattle.

Right. And the folks up in Seattle all say they are from Portland.

My wife usually follows that stuff better than I do. Their website says they’re currently taking a hiatus. No date yet when they’re coming back but says they’re focusing on organizing sporting events for disabled folks. Special Olympics?

Easy enough to spot. None of the local ones are wearing gas masks. (They can’t afford them.)

This was not about ANTIFA, it was about him moving his daughter to another school and not having the legal right to do so.

I’m not sure why the author of the article even needed to add that information.

Bottom line is the guy was unhinged.

I’m happy no one else was hurt. That he was carrying a gun and clips? Had the officers not acted so quickly, we may have had another school shooting on our hands. 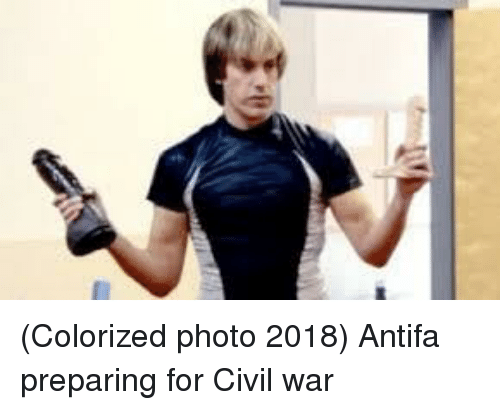 Thank god that officer wasn’t hurt, or any children at the school.

But it is unfair to characterize this as related to his membership in Antifa. He was an enraged ex-husand, and frankly, a piece of crap human with a gun. But pulling a weapon on a officer in your child’s school has nothing to do with Antifa.

I’m not defending Antifa. Quite honestly, I don’t know that much about them except the headlines. But this incident had nothing to do with politics.

I’d like to know how such an unstable man was allowed to buy a gun, and (presumably?) legally carry it.

And it’s sad, but another argument for metal detectors in all schools. really sad that our nation has come to that, but it is true.