Looks like two healthy adults dragging an innocent child along for tear jerking shock value; all this while we have legal citizens in legitimate need. Especially our vets. By the time our Liberals are finished, The Goose That Laid The Golden Egg Is Going To Have A Coronary.

Who said anything about Mennonites, or religion for that matter? Take a look at the pictures in the Reuter’s link the op posted, and compare them with the photo he posted which has nothing to do with the story.

Who cares what they look like. The laws are the laws. If you don’t like them, work to change them. Until then, they can seek asylum elsewhere or wait for their case to be heard in the United States.

They can always be flown to Sweden since they openly welcome everyone .

That would depend on who’s coming and from where.

If we went back to recruiting immigrants primarily from Europe, S. Africa, and used a merit based system we could certainly take that many.

That would equate to less than the equivalent of 1% of our population every year. Without immigration we can’t even maintain the current population as our only growth is coming from immigration.

It’s only going to get worse in the future as more and more people make it into the middle class. We’re not raising kids to provide labor on family farms or in family businesses so we’re well below replacement rate.

While that wouldn’t be all bad it has serious economic repercussions as well as tax/spending repercussions we’d have to deal with.

There’s 7 pictures, look at them all. It’s not the

scary people in the op. Where’d that picture come from, not the link he posted. Point being, make the thread, make your point, make it honestly.

Okay okay, let’s all stipulate that only a handful of the MS13 members in the picture are in the ‘caravan’ - or maybe none. The point is, we can’t afford to feed and house our own mentally ill, our own drug addicts, we can’t get quality medical care to rural areas, and we can’t afford to shoehorn more children into our grotesquely overcrowded classrooms - we have to draw the line somewhere.

We need to get them all out. The best way to get these creatures out of America is to cut their access to welfare and other social services. No more gibs, and the

will crawl back to where they came from. Petitions and bills need to be born that will accomplish this. Also,

babies must go back as well. Imagine these young feral eyed monsters when they are grown, having a lower IQ and more proclivity to violence than their parents. It’s time to make America clean and safe again.

That’s the most recylcled" refugee picture" in modern history.

No question about that. Secure the borders and remove the illegals as they are found.

Let Americans start dealing with our own problems with our own money instead of borrowing money from the rest of the industrialized world to give away as foreign aid to the “developing world”.

I’m not sure we will ever be able to end birthright citizenship for illegals but all it would take is one favorable SCOTUS ruling so it’s possible.

It will almost certainly never happen legislatively or through the amendment process.

Secure the borders and eventually the problem solves itself.

When reading this story the first thought that comes to mind is Democrats prioritising playing politics over rightfully distributing Humanitarian aid to the needy. This is pretty staggering on so many fronts that I really don’t know where to begin to express my contempt for the disrespect shown towards the generosity of Tax payers dollars being wasted like this. If you are not outraged by this story then you are not American and you are just another sheep living on the plantation that’s given in…

Yes I am bringing attention to this because it’s pretty outrageous!

And democrats are again pushing for PR statehood. Wonder why?

PR has been a corrupt shithole for most of it’s history. For some reason that has simply been the model for all or at least most of Latin America for hundreds of years.

Just look at the video. I can not remember anything like that in recent memory. Remember too that PR got more aid than Houston hurricane victims and it’s not even close and especially what is more outrageous is PR is not even a state in the Union. I am seriously pissed!

I believe it’s known as ( more or less ) wanton waste. Like poaching a deer & taking only the hind quarters or tenderloins, & leaving the rest to rot.

No this is not the same! The amount in that warehouse is a on whole other level! You might want to read the details first of that article I posted in that thread. I don’t think a lot here are aware of that story yet.

I may have jumped to a conclusion; just mentioning waste. If something is not used as intended, it usually points to waste.

Live footage from the scene showed migrants wading right into the shallow waters of the Suchiate river after Mexican National Guards had blocked their path into Guatemala via a nearby bridge over the weekend.

Initially, people crossed into Mexico, walking right passed Mexican soldiers as they watched on, but the military soon blocked off the route and appeared to prevent further passage using riot shields. Some of the migrants hurled rocks at the soldiers and tried to flee past them. US-bound migrants cross into Mexico through river, hurl stones at military as...

Why do we bother trusting Mexico with this shit? Let’s all just recognize that they are a completely failed state. Time for the US to do the job we have been putting off for far too long.

They won’t be allowed into the US.

They have never been “allowed” in the US but that’s never stopped them from showing up and illegaly crossing our border. 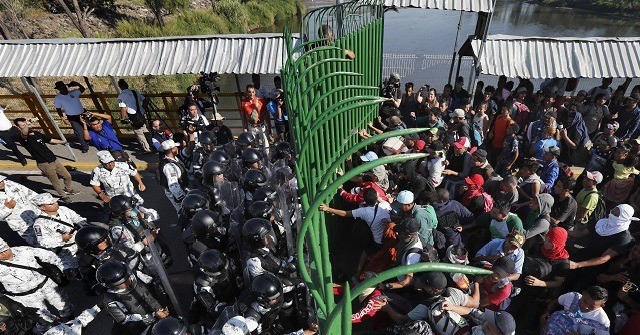 Mexican authorities managed to hold off approximately 1,000 Central American migrants who tried to force their way through its southern border with Guatemala.