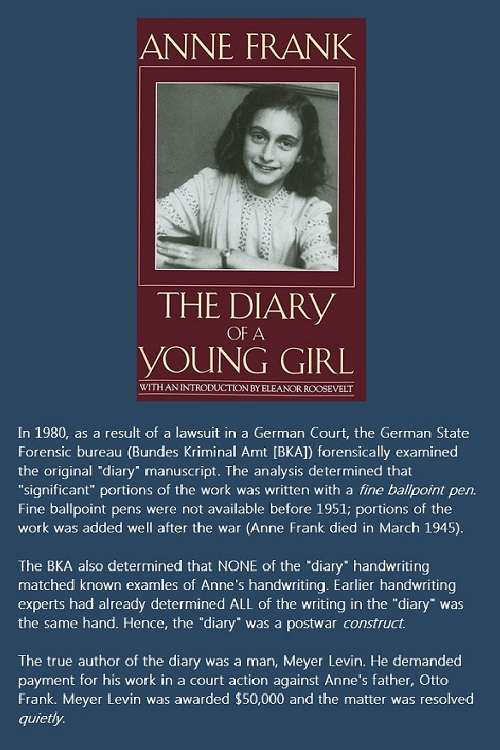 r/badhistory - Anne Frank's diary is a fraud! A look at Anne Frank denial and...

Smoking gun(s):
The diary was written in ball point pen (in the 1940s?)
The handwriting is that of an adult, not of a 12 year old.
There are no error corrections or rewriting of sentences.
There were translation errors (not from Dutch to English, but from English to Dutch!)
There was a lawsuit against Otto Frank (Anne’s father) by a New York writer (!) for copyright infringement
Blatant discrepancies in the description of the hideout (het achterhuis) including the “secret door”

So apparently you didn’t read past the first bloc of text.

So what’s the source for this? Of course none is provided in the image, but a search reveals it to be taken from a website that cites Ditlieb Felderer as the source.

Felderer is an interesting character. It would be wrong to say he has been discredited as, well, he doesn’t seem to have ever been credited. His book in which he attempts to expose the diary, Diary of Anne Frank- A Hoax ? is a bizarre, rambling and at times sickening publication that does more to probe in Felderer’s own mind than the diary itself. He goes into strange detail about ■■■■ and sexuality. And since it was published, his claims have been discredited by actual academics. It is not, to be succinct, a valid source.

But to take on this point about the ballpoint pen anyway, as it is frequently repeated. The BKA report – which consisted of just four pages – reported everything matter-of-factly. Yes – there were ballpoint pen markings in the diary. These had in fact been written in the 1960’s by a woman carrying out graphological investigations into it. [1]

The other ballpoint amendments were page numbers written onto the sheets and some minor corrections. All ballpoint amendments differ dramatically from Anne’s handwriting, as was confirmed later. The West German police had also reported that ’emendations’ and ‘corrections’ were made to some of the pages of Anne’s diary.[2] This was also correct. Anne went over her own work as she believed that one day it may be published.

The “author” of this critique of the Frank diary is another obsessed ■■■ hater that was thoroughly discredited during the discovery phase of his own lawsuit filings.

Friendly reminder that Anne Frank would’ve survived and the Hunger Winter wouldn’t have happened had it been the Army of Northern Virginia under General Lee leading the race to Arnhem and the Rhine.

I am 100% convinced that the entire American education system, especially history, revolves completely around ■■■■■

I have never in my life heard of Anne Frank, and yet every single American has to memorise her diaries. 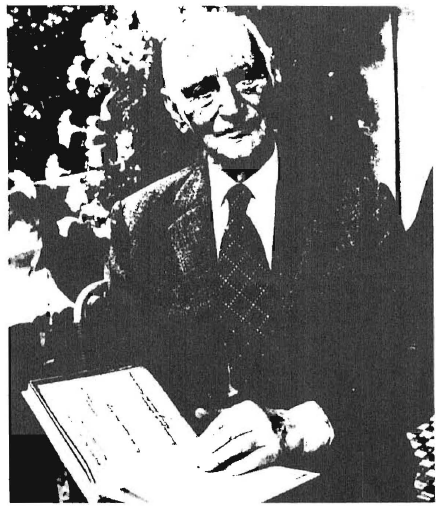 Clever Jew Made Millions from Dead Daughter by Dr. William L. Pierce TUCKED AWAY ON pages 119 and 122 of the October 6 issue of Der Spiegel, a weekly German news magazine comparable to Time or Newsweek, was a news item of considerable...

And the friendly Nazi Germans who put her father, Otto Frank, in the hospital in Auschwitz

Anne Frank Diary Fraud Finally Admitted by Der-Himmelstern, Jan 24, 2016, 10:04:59 AM Journals / Personal So, finally they admitted the long time fraud publicly. Anne Frank’s diary was co-authored by her father and thus the credibility of the book...

What do you mean? If no one in Europe knows or cares about Anne Frank but Americans are forced to worship her then something is wrong.

What do you mean?

I meant that what you posted is untrue. Do you not understand English?

If no one in Europe knows or cares about Anne Frank…

That “no one in Europe” knows or cares is a ridiculous assumption.

…but Americans are forced to worship her…

My saying that you are a stupid bloke is far more accurate than anything in your post.

This is a really sick story. Anne Frank existed and did die from Typhus but her father manufactured most of the stories to sell the book…imagine that, made up stories about his own daughters death to make money, who would do that???

I have never in my life heard of Anne Frank, and yet every single American has to memorise her diaries.

It is strange. Someone quite some time ago noticed that the diary was written entirely in a ballpoint pen which wasn’t invented at the time that it was said to have been written. By the time the book became famous in America thanks to the media, this glaring problem was just ignored because by that point it had been so widely circulated and ■■■■ love having the goyim read it and feel bad.

So much of the holocaust literature that they feed the gentiles has been debunked but since we’re hopelessly gullible it doesn’t even matter. For another example see “the painted bird”. Many ■■■■ and historians on the subject even acknowledge that many accounts don’t hold up to scrutiny; but in a very talmudic rationalization have argued that the moral instruction and proper reverence for ■■■■■■ suffering that the works impart outweighs the actual issue of whether or not the accounts are true.

I wish I was making this up.

With all the problems in the world today, all the issues with policies and government, all the humorous stupid things in the world why another nazi didn’t;t do it, ■■■■■■ bashing topic??? We have several you can vent on instead of trashing the forum.

I wish I was making this up.

You may not be making it up, but you read it somewhere else. I doubt you have even seen her original diary. 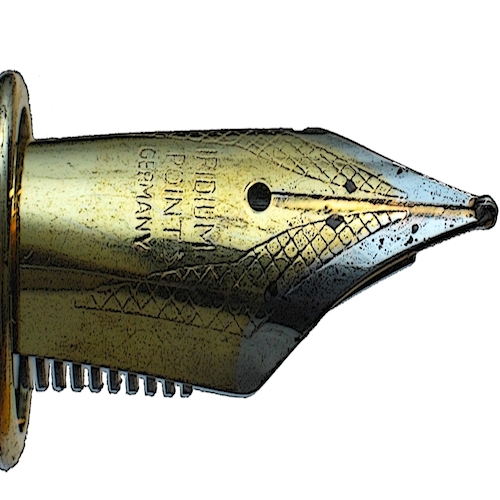 Anne Frank's diary was not written in ballpoint pen; she used wet ink. In the compilation process, someone else wrote two loose notes and added page numbers

Time to start flagging this garbage.

What do you think.

50 topics with holocaust bashing and it is alive again.

He’s an anti-Semitic Holocaust denier on a mission.

Bless his heart! He’s been brainwashed!

They are trolls hiding behind free speech. The mods are afraid to treat them as trolls though. (Even though they have banned other trolls who trolled. They now say ’ if we ban these so called antisemite people we will have to ban everyone who hates anything." Disingenuous. But we don’t own the forum so that false reasoning prevails here.)

The thing is… these trolls are tools of a known terrorist organization called Hamas. They may be Japanese but they are doing the work of Hamas.

See something, say something.

It isn’t that they are merely antisemite but they spew the same thing derailing threads. This should be under the lounge at best and the trash normally.
I’m tired of flagging the same thing over and over again so I’m out of here until they clean up the new members issues.

If they don’t there are other places to post and discuss topics that have merit.

How was this thread derailed if it was about the Anne Frank diary hoax?

Yes there are but you won’t bc Hasbara trolls are paid to close down any discussion of the Holohoax aren’t they?