An Important Message from Lana Lokteff: I Quit. They Won

This is an incredibly important video from Lana Lokteff at Red Ice. I hope that all of you who claim to care about free speech and liberty take a few minutes to watch it.

All the hopeful thinking in the world isn’t going to do anything… only action will. And they wouldn’t be pushing for a civil war if they didn’t think they could win… they have a plan for that…we should be trying to avoid it, not waiting for it to happen.

Mommy Lana is right as usual. Once you see things for the way they are you can’t go back. It’s why we still need to wake up the normies. Particularly white normies. That’s why they always want to SHUT IT DOWN.

Don’t you people have any educated leaders?

Exactly right on the first point. Talking among ourselves and complaining about what the other side is doing will accomplish little if anything. It certainly won’t convince a single fascist to change its deluded mind.

I’m not an advocate of violence, but there will come a time, if things continue on the current path, that we will have to physically push back, beat back or shoot back at those who use violence to subdue and maintain their sense of power, but for them to be reasoned with is essentially impossible as they are truly mentally incapable of using logic and reason. Each of them either has been or is being systematically transformed by repetitive brain washings and reprogramming.

Are you able to refute any of the points she made in her video?

Many! But we have very few violent assholes like the fascist “ANTIFA” types attract.

Why would I want to refute her statement of her feelings? That’s all that was. I might not even disagree with 90% of what she said. But it was just a whine.

I almost cut it off in the middle myself…until she came back on saying she was just kidding…April Fool a few months late!

The first half likely gives the liberal fools a sugar rush…the second half makes them depressed!

She really nailed how we all have been feeling lately. It’s important to recognize that…and have a plan to fix it. Excellent video.

My mistake… sorry. After the whine she did encourage everyone to send money. Kinda like a televangelist.

@kvetch, feel free to refute with facts anything I say here. Besides the whine and the “send money” ad, what exactly was the purpose of her video?

Don’t engage with the shills. They will only praise policies and actions that are inherently globalist and anti-white.

Let me know when you see posts from me that support anti-white and globalist policies. I’m likely the most American isolationist person on this forum.

You just recoil in fear if we dont click our heals and salute everytime you people speak and post.

Painful as it was I watched the whole thing. She does a good job of selling her shtick but it’s nothing more or less than White Nationalist BS with a coating of chocolate and honey.

Funny that she felt the need for a gratuitous and yet strange mention of Israel. …something about Israel having a wall, which seems to me to be contrary to the globalist doctrine they always blame on the ■■■■■

I’ve never been a fan of lecture videos. But it’s all the rage nowadays. I’d rather read the text than watch someone’s face lecturing me.

I didn’t get far. I gave it a try because of some of the commentary here, but I couldn’t do it.

I did get a good pause face when I stopped it though. 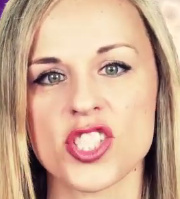 From their comments you will see that Lana is correct.

To them, people of European descent are not allowed to have interests. We aren’t permitted to voice our concerns, if we do then we are white supremacists. Our countries are for everyone! Blah, blah, blah. It is all so predictable and tiresome.

A country that is not bound by shared history, culture or ancestry will fail.

It may take years but it will and it should. No use in fighting to preserve what is decaying. Let it.

The highest, best parts of culture are timeless and never die. They can easily be revived in the new.