Actress and MeToo activist Alyssa Milano has called for a sex strike. Backing her up is Bette Midler and little known Pam Keith from Florida. Keith ran for Florida’s 18th Congressional District and lost.

Milano tweeted. Protect your vaginas, ladies. Men in positions of power are trying to legislate them. She was making reference to Georiga’s new law covering abortions.

[HB 481, the most extreme abortion ban in the country. In addition to criminalizing abortion after about six weeks, the law threatens to imprison women who terminate their pregnancies. It also grants full legal personhood to fetuses, ensuring that anyone who terminates a pregnancy after six weeks—including a pregnant woman herself—may be liable for murder.

So … libs have discovered that abstinence is a viable means to reduce pregnancies. Cool.

It worked for Lysistrata!

And another reason to start making sexbots.

Are we going to get to the point where the government has to order people to have sex? 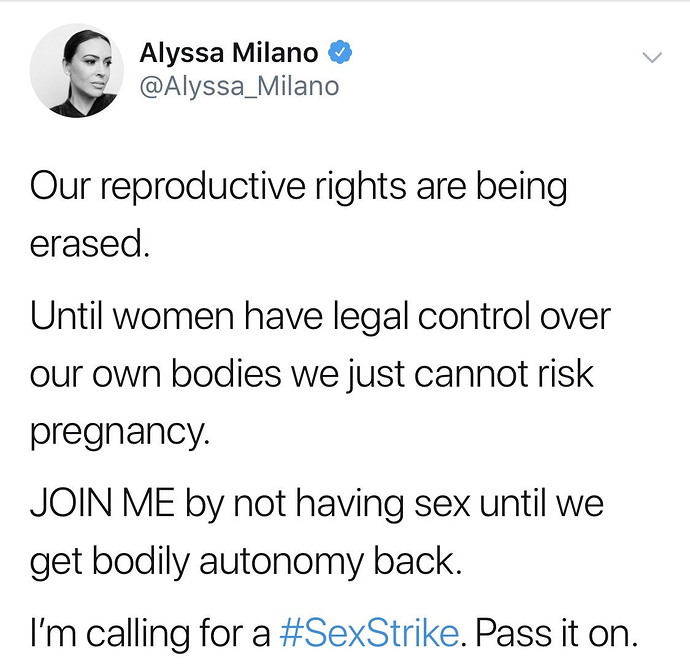 I was never a fan of Alyssa Milano. But when I started watching Charmed…my eyes were on Rose McGowan. 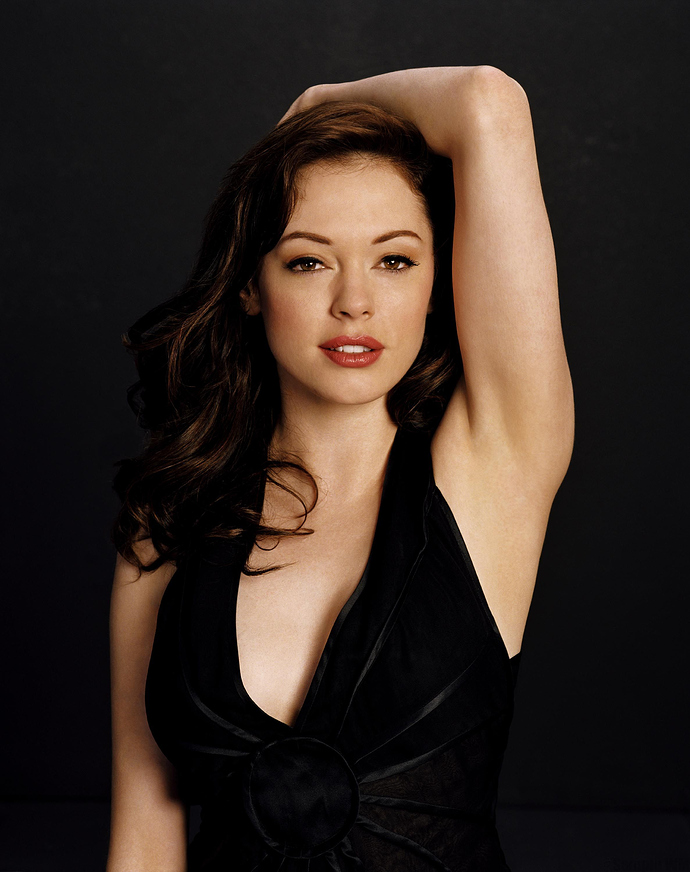 My eyes still are…

But that’s just me.

I wanna see Private Manning sign up to this. That will complete the insanity.

And she probably got laid the night after she tweeted this.

All of a sudden, many progressive women became crazy cat ladies. I don’t know why.

My question is why woman have to wait 20 weeks to decide to get an abortion? This question defies logic on a basic level.

Then you have this moron making false equivalencies that only not silences the debate between oppositions but further the divide in tribal politics.

This is only relevant if the cycles are regular. A pregnancy test would start to work around the time the next period is due. It would be more reliable a week later i.e. 5 weeks gestation. Some women don’t have regular periods. It is quite possible to not have a period for 2 months, but still be able to get pregnant, in which case, a pregnancy may not be suspected until much later on.

An embryo cannot be aborted at 6 weeks gestation. It is too small. Abortions start at around 7-8 weeks.

Contrary to common belief, a 7 week old embryo is not just a blob of cells. It has a distinguishable head, arms and legs, fingers and toes, and a beating heart.

Washed up actress trying to remain relevant we celebrate her inaccessibility !

A has been actress.

Don’t you love it when a has been do nothing jumps up on the podium and speaks as if anyone cares?

After my second son was born my now ex wife and I decided that we did not want any more children. Two was enough for us. So I manned up and made an appointment to see my doctor about a vasectomy. I opted for the laser procedure which is irreversible. This way she did not have to continue with taking birth control pills and we would never have to worry about an unwanted pregnancy. She was in full agreement.

Before the doctor would do the procedure my wife at the time had to sign off stating she was in agreement with me having a vasectomy. The doctor said it was common practice and he would not perform the procedure without her signed agreement. I was a little put out about that. The doctor said that some doctors had been sued by wives for performing vasectomies on their husbands without their consent. He went on to say that these doctors lost those lawsuits.

Now, if a married man must have his wife’s consent for a vasectomy why then are wives permitted to have abortions without their husband’s consent?

Have you thought that it is often the men who want abortions? Anecdotally (granted not statistically), women are easier to persuade to keep a baby, so long as they know they will be looked after. It’s the men who want out.

Anyhow, I don’t understand why it even gets to the point of considering abortion anyway in many cases. The morning after pill (levonorgestrel) is effective up to 72 hours after unprotected sex.

so because Alyssa isnt getting laid she has to make sure that no one else is?

Isn’t that what the feminist movement is all about, jealousy (of other women)?

Isn’t that what the feminist movement is all about, jealousy (of other women)?

yeppers , pathetic isn’t it? they are jealous of some women success who doesn’t need or require the idiotic feminists help

Literally some of the least ####able people on the planet calling for a sex boycott. That HAS to be seen as a win win…