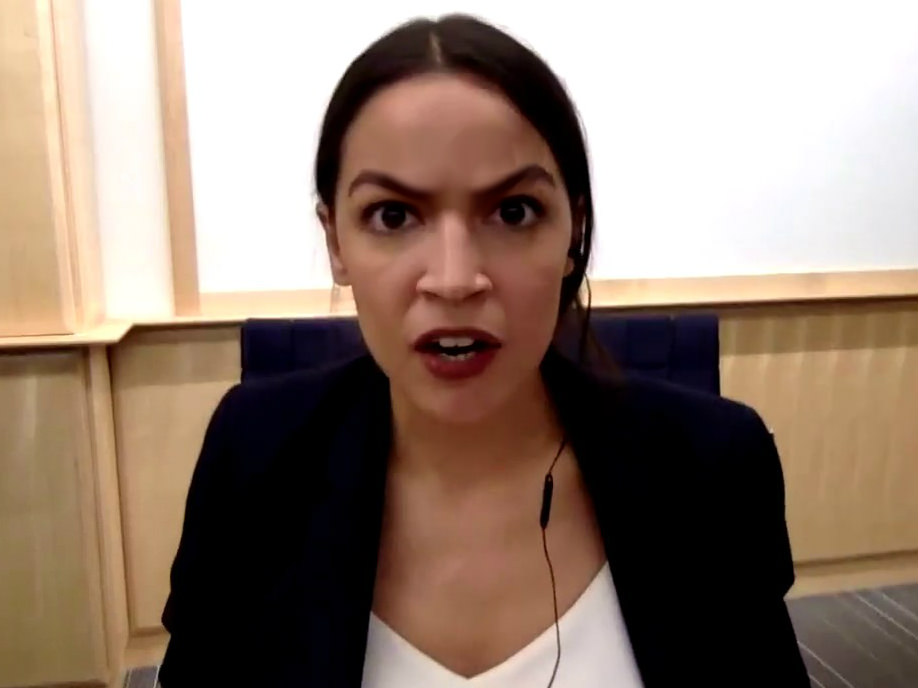 News is starting to circulate that while AOC was out drinking in DC over the weekend, a homeless veteran got a little too close to her and her entourage.

From what people are saying on social media, when AOC stepped out of a DC bar a homeless veteran asked for some money. The self-proclaimed socialist and champion of the downtrodden apparently got angry with the man and a verbal altercation ensued.

Apparently the veteran got a little too close during the argument and that’s when AOC spit right in his face while her entourage laughed it up.

Tweets about this incident are getting deleted all over Twitter. Apparently there is a video out there but it keeps getting taken down. The powers that be don’t want us seeing their socialist queen in action.

Why am I not surprised. This little shit had been running her mouth acting like an entitled little brat since she got in the spotlight. She’s a typical leftist piece of shit who wants to live high on the hog on someone else’s dime. When someone asks her to handout some of her money, she spits in their face. This tells you all you need to know about that little snake.

I’m saddened by this but not surprised. She was a trashy bartender before those morons in NYC put her into office. Sounds like very trashy and uncivilized behavior that we continue to see more and more of. She probably didn’t even think twice to spit in the face of the veteran. So sad.

Is there a such thing as “Hispanic privilege”? If so, she is the poster child for those Hispanics who think they can be granted anything just because.

Is there a such thing as “Hispanic privilege ”?

Yes. It’s called Illegally voting in our elections. It’s how AOC got into office in the first place.

Tweets about this incident are getting deleted all over Twitter.

Down the memory hole it goes. Their paid actress screwed up and now won’t get to be held be responsible for her actions.

Tweets about this incident are getting deleted all over Twitter.

I’m sure one of the media outlets like Fox News got ahold of the tweets.

If AOC spat on a veteran the story would be breaking all over the place and the so called video would go viral before anyone had the chance to take it down.

The only reference I can find online is a link to this site.

You’re assuming there is video taken by someone willing to share it.

I’m not finding the story anywhere. Do you have links?

Yeah, I can’t find this story anywhere…no link to back this story. Seems this story is very well fake.

I’ve tried Yahoo and Google both and don’t find a reference to it anywhere.

Not that I would put this kind of behavior beyond her, I just can’t find anything to corroborate it taking place.

@toastedcheese finds it only on this site, @Ichigo_19 doesn’t find it anywhere, @TWR searched on Yahoo and Google to no avail, @asaratis searched Bing and DuckDuckGo to no avail…

If it comes up on any credible news source, I’ll make a nasty comment about AOC regarding her behavior.

Otherwise, I think this thread should be unlisted (if not DELETED) so PoliticalBullpen doesn’t look like a ragtag, fake news promulgator.

@Patriot and @KVN will determine what happens next.

I flagged this post…so, I am taking a knee

If we are going to delete lies, then …talk about a slippery slope!

I think the posts that challenge the OP are sufficient to show the nature of this forum.

I don’t think it should be deleted because if evidence does come out that supports the OP then this will be one of the few places that broke the story.

If it does not, then OP will bring great shame upon himself and the thread won’t age well.

You can’t find any dirt on AOC so you have to make stuff up. Typical right wing FAKE NEWS!

You can’t find any dirt on AOC so you have to make stuff up. Typical right wing FAKE NEWS!

Don’t need to “find” any dirt on her, stupidity comes flying out of her mouth on a pretty regular basis.

She is the joke of the dem party and the very reason republicans will dominate in 2020 !