The White House released an executive order Monday afternoon intended to require insurance companies, doctors and hospitals to give patients more information about precisely what their care will cost before they get it.

President Trump announced the new policy at a signing event, flanked by doctors and patients who had been hit by unexpected medical bills. The event came a week after the official launch of his re-election campaign, and it allows the president to make a claimthat he is pursuing a far-reaching health reform plan, his answer to voter concerns about the high costs of care.

“We’re taking power away from bureaucrats, we’re taking it away from insurance companies and away from special interests, we’re giving that power back to patients,” he said, adding that the proposal would bring health care costs “way, way down.”

“We’re taking one more giant step towards a heath care system that is really fantastic.”

Mr. Trump was elected on a promise to repeal the Affordable Care Act, and he has continued to suggest that a plan to repeal the 2010 health law is around the corner, even after Republicans failed to pass several replacement bills in 2017. His attorney general is arguing in court that the entire law should be invalidated. But at Monday’s event, he sounded a more conciliatory note and said he had instructed the Health and Human Services secretary, Alex M. Azar II, to do “a great job” administering the Affordable Care Act.

From the team at NYT Parenting: Get the latest news and guidance for parents. We’ll celebrate the little parenting moments that mean a lot — and share stories that matter to families.

The transparency order could upend the traditional business practices of major players in the health care industry by revealing price negotiations that have typically been kept secret. Insurers and medical providers negotiate discounted prices in private, and neither party wants competitors to know the details of the deals they’ve struck. The result is a market that can be opaque, with consumers frequently shocked at the prices of their care. President Trump and Mr. Azar say patients could avoid such unpleasant surprises if they could find out the cost of medical services in advance.

But the wording of the order, which delegates the details to regulators, also leaves ample room for modest forms of transparency that might rankle industry officials less.

There had already been strong pushback by industry groups over any proposal that would have forced them to detail all of their negotiated prices. Exactly what information hospitals and insurers will have to disclose is not specified in the executive order, which has no force of law on its own. White House officials said the details would be worked out during the rule-making process.

In an interview after the president issued the order, Mr. Nickels said the decision to go through rule making was “a positive move,” indicating that the administration was listening to concerns from the industry and others. “They have clearly invited or encouraged stakeholders to weigh in,” he said

The president became interested in the issue after hearing stories from patients whose finances were upended by high medical bills. And he sold the idea in populist terms, saying that increased transparency could help protect patients from a predatory health industry. He has also called for legislation to ban so-called surprise medical bills, when patients receive care from a doctor in the hospital who is not covered by their insurance; Congress is moving to answer that call.

Administration officials say they believe the order could result in substantial decreases in the cost of medical care. “Prices will go down, and patients will win,” Seema Verma, the administrator of the Centers for Medicare and Medicaid Services, said in an interview. Ms. Verma emphasized that the order “specifically mentions negotiated rates,” rejecting criticism that the order was watered down. 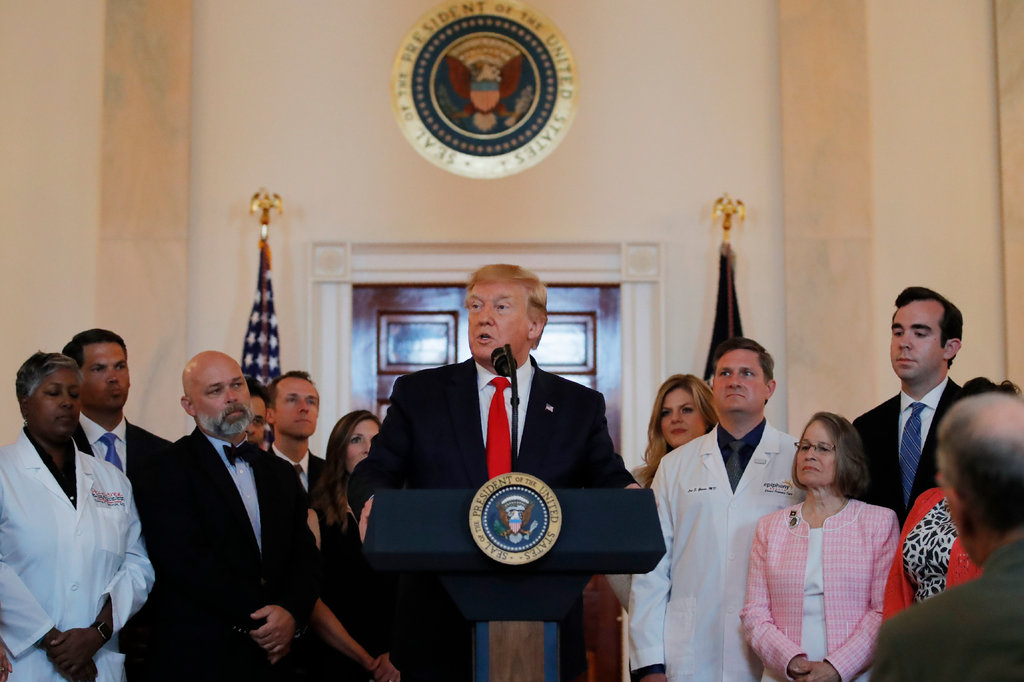 The president calls it ‘a giant step towards a heath care system that is really fantastic.’ Experts are less sure.

Without even reading the details this can only be a good thing.

When the pharmaceutical companies are forced to disclose their profits, priciing schemes, and and price fixing we’ll really be on a roll.

Congress needs to force them to spread their liability and development costs equally among all buyers foreign and domestic along with the rest.

Not sure of the plan but this makes sense only if patients are given a histogram/probability curve showing what people at this stage of the illness ended up paying. And then -recalling that half the population is less than average IQ - the question remains: will people understand the data?

Also… what will people do with the data? That then involves more probability curves. Suppose they are told

Now add the statistics of how much insurance will pay and how much will be left for the patient.

I’ll tell you, if you aren’t sick before trying to process this information, you will be afterwards.

I have a better idea. GET THE COST OF HEALTHCARE DOWN.
frivolous malpractice lawsuits, defensive procedures, overregulation, free extensive medical care for illegals and criminals, etc. (Example: Bradley Manning penis mutation surgery. Who paid for that? We did.)

You need to know WHAT it costs to get the cost reduced.

Any light shining on pricing and empowering the medical industry consumer is a very good thing. It also sounds like this EO was designed to activate Congress, not usurp it.

A great step in the right direction and good news.

You need to know WHAT it costs to get the cost reduced.

Any light shining on pricing and empowering the medical industry consumer is a very good thing. It also sounds like this EO was designed to activate Congress, not usurp it.

Bernie Sanders has been advocating similar for years…

Well that’s completely false. We hate excessive and repetitive regulation and those that unjustly interfere with or impose on our lives.

It also sounds like this EO was designed to activate Congress, not usurp it.

Yeah, and Obama’s EO’s were designed to activate Congress…too.

Pure, unabashed horse hockey. He flat told us he was using his pen and his phone to go around congress.

Wait…does this mean that I will know if a cotton ball or Q-tip costs $500 before I go to the ER?

This is why we need MEDICARE FOR ALL!

Token gestures from a man hard at work ensuring the average American cannot afford healthcare at all.

What does any of that matter? If Trump gets his way then those with pre-existing conditions won’t be covered anyway.

You really just want everyone convered for everything, regardless of whether they worked for their health security or not.

Ok, you support stripping away the legal protections afforded to those with pre-existing conditions. Just say that. It makes for a much better discussion.

Nope! What most are saying who oppose healthcare as an entitlement is that it’s not a right, it’s a service! It boils down to not wanting to become a socialist country by way of Marxist ideology and remaining a free market when competing services makes healthcare affordable! Bleeding heart whining is never a winning argument and is why you communists are losing the larger culture war that you started!

Er, how about agreeing that health care prices should be made public.

Healthcare is about the only thing that doesn’t have a price associated with it.

My son needed to have a sleep study done a few years back. I called to get prices as I would be paying out of pocket. I was transferred for hours and no one was able to tell me what my cost would be.

That is ridiculous. I should have been able to call there and shopped other towns and sleep centers. Maybe…just maybe… the prices being public will allow for competition and drive the prices into something more manageable.

This is why we need MEDICARE FOR ALL!

“Healthcare is already expensive, lets make it even more expensive!”

If only debate on the merits of substance of the ideas that liberals think they championed, then maybe, and it’s a big maybe, but maybe progress could be made! There is no critical thinking when one side purposely ignores the substance all together! Arguing from a ideological viewpoint than a intellectual one is really an exercise in futility that only yields self affirmed delusions that feeds ones sides escape to utopian dreams!