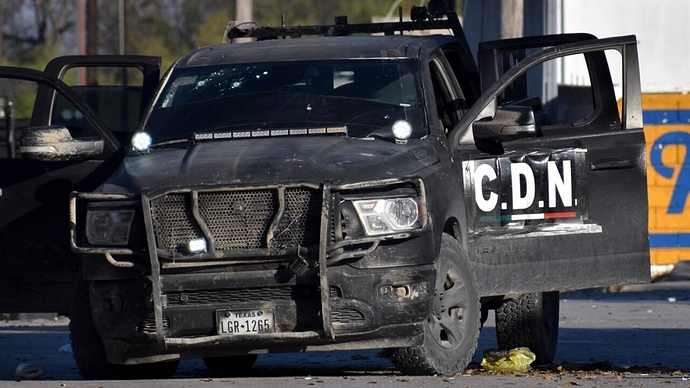 Texas license plates – and they’re driving around with the cartel’s initials in big letters on the door of the truck.

A damaged pick up marked with the initials C.D.N., that in Spanish stand for Cartel of the Northeast, is on the streets after a gun battle between Mexican security forces and suspected cartel gunmen, in Villa Union, Mexico, Saturday, Nov. 30, 2019. (AP Photo/Gerardo Sanchez)

The armed group of suspected cartel members stormed the town of 3,000 residents in a convoy of trucks, attacking local government offices and prompting state and federal forces to intervene. Ten alleged members of the Cartel of the Northeast were initially killed in the response

But the shitlibs and the swamp will have the audacity to tell us designating them terrorists would have no effect because the Mexican government won’t let us bomb them. Which also ignores the fact Obummer didn’t bother to ask the Pakistani government for permission to bomb the Taliban.

Mexico has lost the right to be consulted in any of this imho.

We should have taken out the cartels long ago. Too bad the Obama Administration was busy building them up instead of taking them down.

That’s because the Obama administration needed the cartels. Migrants are brought in by Cartels
Cartels make bank. Cartels use this to fund violence. Rinse and repeat.

Won’t be long until the war starts taking place on our streets, especially of Trump lays the smack down.

The drug cartels are already embedded in Police Departments all across the US and they always have been. Cops get paid like shit and the cartels can fix that. The CIA and Federal government also has their hands in the drug importation trade .

Why is Trump, in charge of things now, allowing the Mexican cartel to provision themselves in America…How do you see this as liberals or democrats fault?

Why is Trump, in charge of things now, being stopped by lunatic Democrats who are enacting sanctuary City laws and preventing the deportation of criminals and gang members linked to the cartels?

Considering the constant flow of stolen trucks from Texas into Mexico I don’t think I’d be too alarmed over this.

The Cartels control all of the illegal activity that goes on along the border including the stolen vehicle trade.

If Trump declared war on homelessness and starving children tomorrow the democrats would declare war on him for doing so.

Do you actually think Trump can do anything about state and local crime in Texas or anywhere else?

Secure the damned border and most of that problem ends.

Why was Obama running guns to the cartels? Notice how there were no calls for impeachment over that, even after two Border Patrol agents got killed as a result.

Apparently there is no wall or border security in the Trump administration and the cartel, as you pointed out, are coming over and buying what they need and taking it back to Mexico.

You make no sense.

Why was Obama running guns to the cartels?

Good question, and there were plenty of calls for impeachment of Obama for a host of different things. GOPer’s just never did it.

It makes me no difference either way. But for those red hatters here bitching about the cartel supplying themselves in America, they need look at the king red hatter.

A few years ago in the small town I live there was woman who worked drug rehab. She fought the drug cartels speaking out against them in public. She and her family got many threats. But she held her ground.

One day the drug cartels had enough so they went into her house and killed her and her husband and even shot the family dog. Then they burned the house down. Now I don’t live on the border as a matter of fact I am about 100 miles north of it. When I first moved here you could watch the cartels driving the streets looking for folks who owed them money.

3,000 people die per year along the border because of the cartels. More people die along OUR BORDER per year than our troops in Afghanistan. We HAVE troops there protecting their border. And Democrats don’t think we are important enough to have them on OUR border. I’m not sure what the magic number for Democrats is, but given the losses we already incur and the degree they wish to open our border to drugs, smuggling and crime I WOULD like to think Democrats at the very least want us safer then there.

I truly would like to think that but they seem insistent on the deaths of more CITIZENS before they do. Our current border is better patrolled by cartels than us.There is simply NO SANE reason for this. WE NEED to put our troops on the border until the wall is built. And we need to do it soon.

3,000 people die per year along the border because of the cartels.

Gun-buyers, many of whom the feds suspected were criminals, were permitted to take firearms purchased in the U.S. and walk into Mexico without interference from agents; the intention was that once the guns were sold to powerful drug cartels, the ATF would later trace the firearms. Whistleblowers and investigators, however, found no attempt to trace the guns.

It is a multi sided problem. Our country does have an almost insatiable appetite for drugs. The illegal drug trade fuels the rehab industry. How much taxpayer dollars is spent annually on drug rehab not only for low income people, but for middle class drug users.
There is little if any talk of how much drug money is laundered buying legit businesses and those on the take approving the sales.
This money is also used to buy judges, politicians, police etc.
I eish it were possible to have night strike ops into Mexico at the cartels .With the latest technology, it can’t be to hard to find them. We could have planes loaded with agent orange and "accidentally " fly over Mexican drug fields and factories etc.and spray.