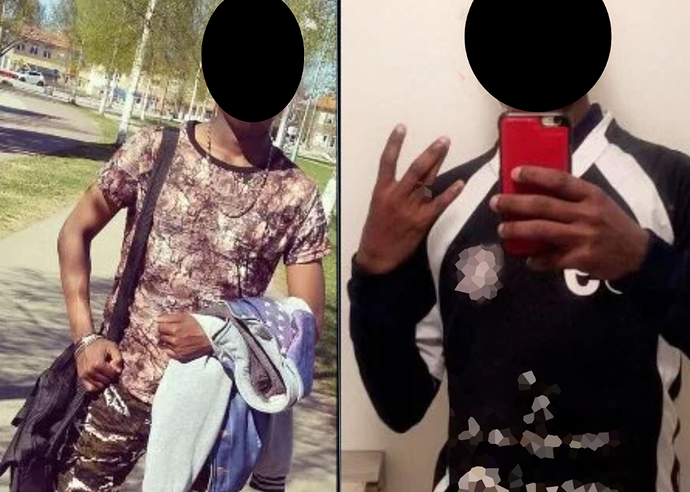 WOW! This is not the first case of serious sexual abuse ameliorated by judges seeking their leftist agenda. Anyone else would of gone to prison!

Don’t worry…pretty soon there won’t be any Swedes left in Sweden - other than the ruling elites who don’t have to deal with the consequences of destroying their country with third world immigration. 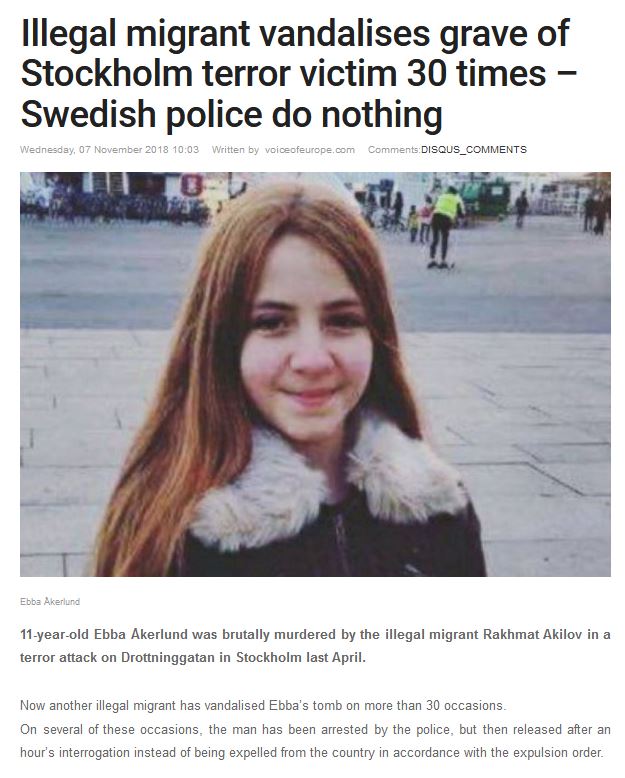 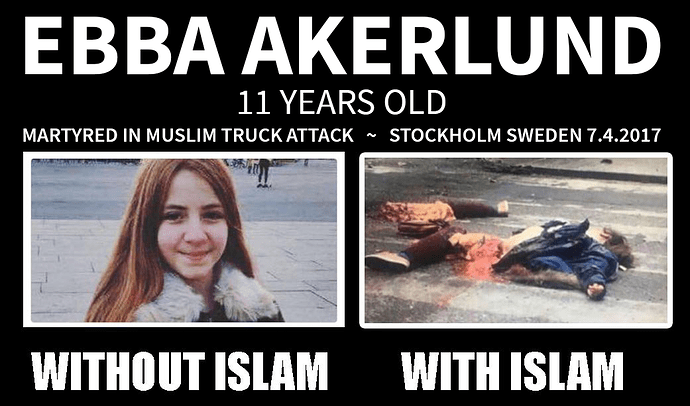 Want to see a real prison sentence? Publicly question Islam or Sweden’s intentionally broken immigration system. That would get you locked up for sure.

You people thrive on fake news. It’s insane. A lot of what we see coming out of Sweden are right wing racists and xenophobes making false accusations which is why these crimes are often dismissed. Sweden does actual investigations and sticks to the facts, unlike this country. When will you people stop bullying Sweden? Sweden is fine.

It’s a first world country filled with wealth, opportunities and happiness. Swedes are the champions of human rights, gender equality AND they’re right to be proud of that. Sweden is rich and has the most beautiful people in the world, of all colors. Their streets are clean, their energy is clean, and their towns look like fairytales. Swedes care about nature and the country itself has a great sense of humor. Sweden is great.

What are you still doing here then? Go move to a no-go zone in Malmo and see how wonderful it is.

Sweden is too far gone, it’s over for them. Time to move on and save whatever else we can. Fuck Sweden, They brought this on themselves putting a bunch of feminazis into power! What did they honestly expect?

Even I’m sceptical of that one because such an atrocity would have made the headlines worldwide, and I’ve never seen it reported. It wouldn’t surprise me if it is factual though; I shudder to think what’s being covered up/unreported in Sweden. 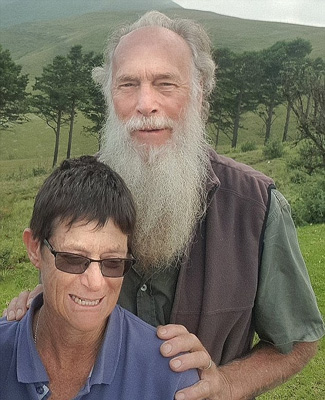 On This Day…
Feb 10, 2018: Natal, South Africa
A British couple harvesting seeds are
brutally murdered for being ‘infidels’: 2 Killed

She was killed in the Religion of Peace truck attack in Stockholm. Poor thing was run over by a truck on her way home from school and torn in half. It happened. 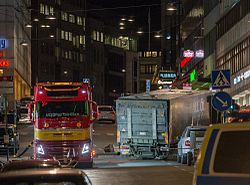 The 2017 Stockholm truck attack was an Islamist terrorist attack which took place on 7 April of that year in central Stockholm, the capital of Sweden. A hijacked truck was deliberately driven into crowds along Drottninggatan (Queen Street) before being crashed into an Åhléns department store. Five people were killed, including an eleven-year-old girl, and 14 others were seriously injured. The perpetrator was Rakhmat Akilov, a 39-year-old rejected asylum seeker and a citizen of Uzbekistan, who ...

When were you last in Sweden? From your description I’d guess about 5 years ago or longer.

Much easier for primitive immigrants to drag a host country into the sewer, than for them to climb out. FGM in Sweden: School where every single girl in one class … Just some cultural enrichment.

Young migrants who carry out sadistic and degrading robberies against Swedes do so because they feel hopeless and like they do not belong in society, according to Sweden’s Social Democratic Minister of the Interior Mikael Damberg.

Remember folks, the next time you feel hopeless, just pee on someone. I wonder how Freud would handle that? Anyway, how about we try to be real for a change. These things crawl from sewers of primitive countries, and drag along their diseases to civilized countries. They are anchored to a 7th century mind set. https://youtu.be/Y1LtNwlXr0I?t=3

“It must be about both lack of parenting and norms, morals and values that are crossed in these gangs, and that is very serious

These young “migrants” are being parented and this is the norm for some of them: to treat anyone who is not a Muslim like garbage and you’ll be rewarded for doing so.

Perhaps their parent’s are proud of them.

What is the disconnect between people like Mikael Damberg and reality?

Perhaps it would be a good idea not to pontificate in a safety zone but actually get out there and see it for himself.

The rapist should have been castrated with a dull bolt cutter, acid pored into the wound and crucified in the city square.

A cage full of starved rats over his balls.

This isn’t an isolated occurrence in Sweden. Here are two related older stories:

A 16 year old Iraqi boy, who murdered a pregnant swedish girl, was sentenced to a mere three years.
The murder happened in May 2010. The girl was the girlfriend of one of the Iraqi boy’s friends.

A 16-year-old boy was sentenced Tuesday to three years of ungdomsvård [secure youth social services] for the murder of his peers girlfriend. The judgment is much harsher compared to the two 16-year-olds who were convicted of murder in Stureby case.

The 16-year-old boy was convicted of the May killing his peers girlfriend in Raby Forest in Västerås. Västmanland district court decided that he intentionally killed the girl using excessive force against the girl’s neck, head and upper body.

The court found no reason to judge the act as something other than murder.

The punishment of three years secure youth are much more stringent than in the Stureby case where two 16 year olds, a boy and a girl, were sentenced by the Court of Appeal to secure youth for one year and eight months for murder.

In both cases the courts found that the criminality of the offense had been ten years in prison if the offender were an adult. Although there were different judges.

For persons under age 21 who have committed crimes, a discount is always given in sentencing. The lower the age, the shorter sentence.

Alderman Hans-Åke Nygren at Västmanland district court said that the penalty for 16-year-old in Vasteras case almost entirely relates to the murder and not the other two crimes, coercion and abuse of judicial procedure, which he also was convicted of.

“It’s murder which prevailed. We started with what an adult would have received, and found that three years is appropriate.”

Hans-Åke Nygren believes that the distinction between the two judges because the sentencing range was amended on 1 July 2009. Previously, the penalty for murder ten years or life imprisonment. From 1 July 2009 provided the courts to impose longer sentences than ten years in prison.

“The amendment may be fairly important in determining the length of the closed juvenile. The change has provided scope for greater variations”, says Nygren.

Josef Zila, a professor of criminal law at the University of Örebro, is not surprised by Tuesday’s judgment.

“The penalty is not surprising. The other crimes such as 16-year-old was sentenced to be alone does not lead to imprisonment, but with the murder of perhaps a few months”, he says.

The 16-year-old thought last spring that his girlfriend was pregnant. She refused an abortion and so did the boy in despair.

In early May, the boy decided to confront the girl to discuss her pregnancy and during the conversation was light physical altercation. The boy says he took the girl by the throat and pushed her, but he then does not remember anything more.

Another young male rapist was sentenced to a mere 4 years (the last 2 years he served confined to his own house), and he did not even have a residency permit to live in the country! Judges try to be “culturally understanding” towards the rapists when they are muslim. This particular rapist had brutally raped a 14-year old swedish girl, calling her a “filthy whore” and “swedish pig” during the encounter:

Abrahim Ali Rahim came to Sweden as an 18-year-old Kurdish asylum seeker from Iraq, settling in Karlstad. Soon after his arrival, he assaulted a 18-year-old girl with a broken bottle in an apartment, before a paryy was about to begin. He cut up her arm with two cuts as a result. Unfortunately she had been drinking and had an incoherent story under police interrogation, so the district court dismissed the indictment, as “it could not be ruled out that someone else had cut her.” Fourteen days later the Kurd hit another young woman in the center of Karlstad. Then he went to an apartment on Kronoparken which belonged to a friend of Kurdish man. According to the woman he pulled her down on the floor in the bathroom. The Kurd took a stranglehold on her neck, hit her in the face and raped her. The woman was crying hysterically and tried to resist. Ibrahim Ali Rahim was sentenced by the court to only one year and eight months . He was also ordered to pay 85000 kronor (about 13,000 in USA dollars) in damages to the raped woman, although this was later reduced because he was found “unable” to pay.
During the trial the rapist required an interpreter, as he did not speak swedish. Nowhere in the appeal addresses was there a claim for deportation.

If this happened to someone in my family, I would simply bide my time; and the day would come when I served it up cold. With a vengeance. They would believe they had met Satan. I mean what do you do when the judicial system abandons you?

Holy SH-T! What a video! That must have been Italy. I have read many times that migrants do their business right in front of the Cathedral in Florence!