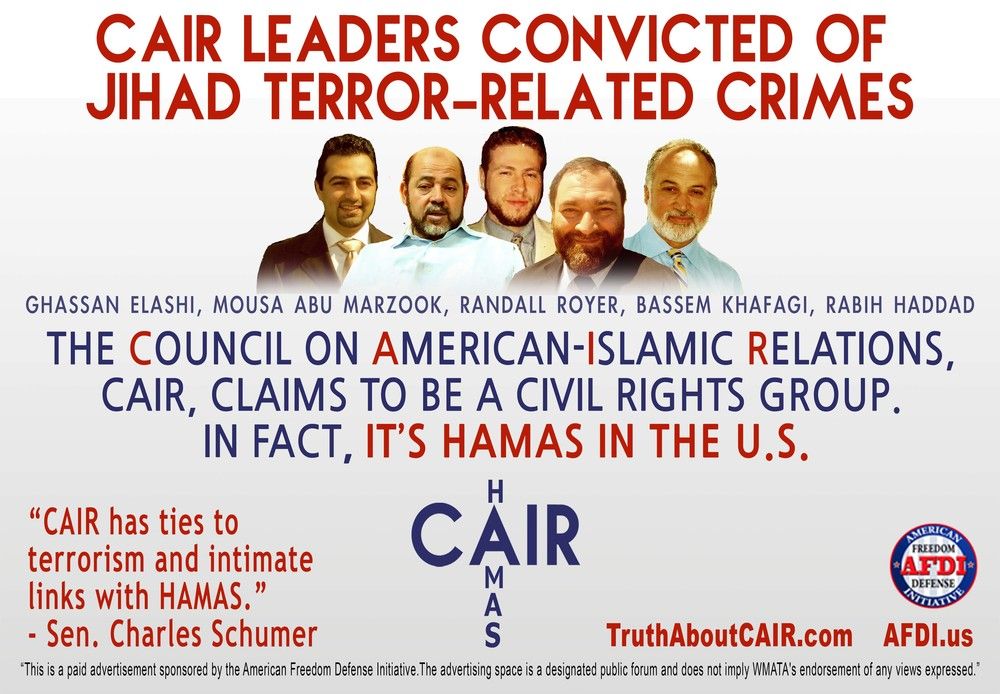 Three weeks after Oussama Jamaal, the Secretary General of the USCMO (US Council of Muslim Organizations, the U.S. Muslim Brotherhood’s political umbrella group), penetrated the White House on 25 September 2019 to attend a symposium led by Vice President Mike Pence, the Department of Homeland Security (DHS) allowed Sufyan Sohel, the Deputy Director of CAIR-Chicago, to facilitate a discussion and training session for U.S. Customs and Border Patrol officers at their offices near O’Hare International Airport on 15 October 2019.

According to the CAIR-Chicago website, Sohel “…gave an overview of Islamic faith traditions, illustrated the rich diversity of the Muslim community, and delved into the rise of Islamophobia and how bigoted policies, including the Muslim Travel Bans, affect Muslims and other marginalized communities.”

CAIR is the U.S. branch of HAMAS (a designated group on the Foreign Terrorist Organizations list), itself the Palestinian branch of the jihadist Muslim Brotherhood. CAIR was named by the Department of Justice (DOJ) as an unindicted co-conspirator in the 2008 Holy Land Foundation (HLF) HAMAS terror funding trial. In 2009, following the 108-count unanimous guilty verdict in the HLF trial, the FBI announced that it was cutting all ties with CAIR. Unfortunately, neither the DOJ at the supervisory level nor the FBI’s field office in St. Cloud, MN would seem to have gotten the memo. A “hate crimes” event there, originally scheduled for 18 September 2019, eventually was cancelled following protests by local activists, but not before the announcement went out that the FBI would be teaming up with CAIR-MN for the forum…ten years after it was supposed to have cut all ties.

While CAIR presents itself as a civil rights organization, individuals closely associated with it sport a long and well-documented history of engaging in subversive and seditious lines of effort against the USG as reported by the Center for Security Policy (CSP) in its 2015 publication Star Spangled Shariah: The Rise of America’s First Muslim Brotherhood Party. Another red flag for the Trump administration should be the close relationship between Nihad Awad’s CAIR and the pro-HAMAS and openly jihadist Turkish government and Justice and Development Party (AKP) of President Recep Tayyip Erdoğan, which are successfully running foreign hostile influence operations against the USG—on U.S. soil. (See the Diyanet Center of America at https://diyanetamerica.org/ as well as Chapter 2 of CSP’s 2018 monograph, “ Ally No More: Erdogan’s New Turkish Caliphate and the Rising Jihadist Threat to the West ” for details.)

If the Federal Bureau of Investigation supposedly suspended all formal contacts with CAIR in 2009 due to substantial evidence demonstrating a nexus between CAIR and HAMAS, a U.S. Department of State designated Foreign Terrorist Organization, then why is the Trump administration selecting CAIR to train U.S. CBP officers in October 2019?…

Trump administration approves Hamas-linked CAIR to train US Customs and...

What could possibly go wrong? CAIR is an unindicted co-conspirator in a Hamas terror funding case — so named by the Justice Department. CAIR officials have repeatedly refused to denounce Hamas and Hizballah as terrorist groups. Several...

Why not have the cartels and ISIS come in for training next?

This shows the effectiveness of the PC taboo on saying anything about Muslims, Islam, Jihad, Islamists and Islamization which could warn the unaware about the threat of Islam in any non Muslim society or any society where Islam is less than the Stage Two level.

The Five Stages of Islam

This had to have been some kind of mistake or unintentional error. There is no way in hell that the Trump administration would let something like this through intentionally. It could also be an Obama-era holdover gunking up the works on purpose.

Thanks to mandatory diversity quotas in government hiring I wouldn’t be surprised if there were CAIR supporters internal at DHS that arranged all of this.

I’m with you. This sounds like an insider job. I hope there is a massive investigation going on at DHS right now into this because the American people deserve answers.

If Virginia Sen. Tim Kaine, (the Democrat running mate for the 2016 Presidential election) could have THIS amount of involvement with Jihadis without the public knowing about it, those of us who DO know the threat of Islam have our work cut out for us, dont we?

We all must put our “Sen. Joseph McCarthy” (Embrace his history which the Communists have tarnished.) hats on to help expose and clean out Jihadists from our government.

> "Over the course of his political career, Kaine has developed ties to a number of Islamists and Islamist organizations:
*> *
> In September 2001 in northern Virginia, then-Lieutenant Governor candidate Kaine spoke at a “Candidates Night” which was held annually by the Arab American Institute.

> In 2005, the Muslim Brotherhood-affiliated Muslim American Society (MAS) supported Kaine in his race for governor of Virginia against Republican Jerry Kilgore.

*> In his role as governor in 2007, Kaine appointed MAS president Esam Omeish to the Virginia Commission on Immigration. Omeish had previously served as president of the National Muslim Students Association; a board member of the Islamic Society of North America (ISNA); a board member of the Islamic American University; board chairman of the Islamic Center of Passaic County, a New Jersey mosque with deep terrorist ties and an imam with links to Hamas; and vice president and board member of Dar al-Hijrah Islamic Center, a radical mosque in Virginia whose imams have included Al-Qaeda operative Anwar Al-Awlaki and suicide-bombing supporter Shaker Elsayed, and whose worshippers have included two 9/11 hijackers and the murderous “Fort Hood shooter” Nidal Hasan. Prior to his appointment by Kaine, Omeish also had described the Muslim Brotherhood as a “moderate” organization, had praised a former Hamas spiritual leader as “our beloved Sheikh Ahmed Yassin,” and had pledged to help Palestinians who understood that “the jihad way is the way to liberate your land.”

> In May 2007 Kaine was the keynote speaker at the MAS Freedom Foundation’s “Standing for Justice Dinner.”

> In September 2011, Kaine spoke at an event presenting a Lifetime Achievement Award to U.S. Muslim Brotherhood leader Jamal Barzinji, closely associated with the Palestinian Islamic Jihad, Hamas, and the International Institute of Islamic Thought (IIIT). According to the Clarion Project: “Barzinji’s organization, IIIT, donated $10,000 in 2011 to the New Dominion PAC, the organization that held the event honoring Barzinji that Kaine spoke at. The Barzinji-tied New Dominion PAC donated $43,050 to Kaine’s gubernatorial campaign between 2003 and 2005.” Kaine’s Senate campaign in 2011-2012 also received $4,300 from officials of ISNA and the Council on American-Islamic Relations (CAIR), and another $3,500 from IIIT’s president-of-finance, Hisham Al-Talib.

> In 2011, Kaine spoke at a “Candidate Night” dinner hosted by the International Institute of Islamic Thought (IIIT).

> In 2012 a leaked secret memo detailing the agenda of the newly created National Muslim Democratic Council (NMDC), which exhorts Muslims to vote for Democratic political candidates, specifically identified Kaine as one of the candidates it hoped to help elect. The NMDC document was signed by such notables as Basim Elkarra, executive director of CAIR’s Sacramento Valley Chapter, and Linda Sarsour of the Arab American Association of New York.

> In February 2016 Kaine attended a groundbreaking ceremony for the expansion of a worship center at the Virginia-based All Dulles Area Muslim Society (ADAMS), whose executive imam was former ISNA president Mohamed Magid. Five months later, Kaine participated in a meeting sponsored by ADAMS.

> In 2012 the New Virginia Majority, a Freedom Road Socialist Organization front group that seeks to effect “the progressive transformation of Virginia,” supported Kaine’s bid for a U.S. Senate seat. Other supporters included the Council for a Livable World and J Street, the latter of which endorsed and funded Kaine also in his “off-cycle” years of 2014 and 2016.
*> *
> In early 2015, Kaine objected strenuously when Republican House Speaker John Boehner invited Israeli Prime Minister Benjamin Netanyahu to speak to Congress about the gravity of the growing Iranian nuclear threat and his “profound disagreement” with the negotiated deal that the Obama Administration was pursuing with Iran. Kaine joined seven other Senate Democrats in boycotting Netanyahu’s speech. That summer, Kaine declared himself a “strong supporter” of the final agreement, which would allow the Islamist regime in Tehran to enrich uranium, build advanced centrifuges, purchase ballistic missiles, fund terrorism, and be guaranteed of having a near-zero breakout time to the development of a nuclear bomb approximately a decade down the road. (For additional details about the accord, click here.)
*> *

> In May 2015, Kaine was one of 14 U.S. senators who wrote a letter to President Barack Obama urging him to allow 65,000 people from war-torn, terrorism-ravaged Syria into the United States as refugees, despite many people’s concern that terrorists could potentially infiltrate the refugee program.2
*> *
> Later that same year, Kaine opposed a bill passed by the House of Representatives that would have required more careful vetting of Syrians and Iraqis before they could be admitted to the United States as refugees. “These refugees are people who are terrorized, not terrorists,” Kaine said in a November 2015 interview wherein he claimed that “the refugee vetting process is one of the safest areas that we have.” In a speech on the Senate floor the following month, Kaine said: “I look at this refugee crisis as a test … about whether we, like [the biblical] Job, will be true to our principles or whether we’ll abandon them.” He also urged his fellow legislators to emulate the example of the 17th-century “Indians down near Jamestown Island” who had helped starving English settlers to survive by offering “an extension of a hand to strangers in a strange land.”

This had to have been some kind of mistake or unintentional error.

Lol, now that would be the epitome of incompetence.