Why Utopia Will Forever Elude Us

Although the guises may differ, people who study history are no less doomed to repeat it than those who don’t. The reason for this circumstance is not so mystifying once we are prepared to acknowledge that the apprehension of death, and the necessity to mitigate that apprehension, always has and always will prompt and shape virtually every human activity. If our responses to the prospect of death can, for sure, be benign and creative—can, for example, result in works of art that will survive our demise—they are, as often as not, malignant. And this is a grim reality that despite lessons from the past we are compelled to perpetuate.

Let me try to explain.

When F. Scott Fitzgerald remarked that ”In [the] dark night of the soul it is always three o’clock in the morning,” he was talking about the fundamental burden of human existence, of the terror that inhabits a life that is aware of its fate. To live with just a modicum of equanimity that terror has to be managed, and what we do to this end is we bury it. We repress it. But notwithstanding our success at repressing an all consuming death dread—even to the point of becoming apparently heedless of death’s inevitability—our trepidation never entirely disappears. Indeed, it remains subconsciously constant and dynamic and, however incognizant we may be of its processes and consequences, it is the determining force behind all manner of destructive behavior.

Simply put, beings who know they will die cannot withstand extended periods of amity. Unable to confront the ultimate evil of death directly, it’s essential to have enemies, enemies that can be confronted. We require, that is, human surrogates for evil who are at the very least potentially vanquishable. Persons of races, cultures, religions, nationalities and sexual orientations different from ours serve this purpose well. Through our hostile engagement with these designated embodiments of evil, we simulate what constitute symbolic struggles with death. Absorbed and preoccupied by these struggles, they allow us, when we win, to experience the pleasure of securing what feels like a victory over death. Pleasure, as Epicurus noted, is the absence of pain, and pain is definable not merely as physical suffering but also as fear and anxiety. The eradication of manufactured adversaries affords us the sensation of killing our own death.

Of course, since the basic problem still exists, our elation in these contrived instances is transitory. It wears off. We are forced then to make new enemies. (When we lose we may feel as good as dead, may enter a profound depression that will not lift until we identify fresh villains with whom to do combat. And while I’m in the aside of a parentheses, I don’t think it’s farfetched to suggest that what we really mean by the “social contract” is the unspoken agreement to supply one another with antagonists for the battle with mortality.)

Born in 1939, only a couple of decades after the “war to end all wars,” I’ve been a witness to World War Two, the Holocaust, the dropping of the atom bomb, the Korean War, the Cuban Missile Crisis and Vietnam, not to mention 9/11, the invasion of Iraq, genocides, assassinations and countless mass murders. All of these travesties were intended to enable their perpetrators to deny their abominable destinies. The Donald Trump administration is among the most current of such travesties. Should I last a little longer I’m quite likely to attend the disintegration of democracy itself.

In the case of Trump, and following what I’ve attempted to describe, we can clearly see why he ascended to the presidency in 2016 and why (barring genuinely intolerable investigative revelations—I write this in late winter of 2019) he may yet win again in 2020.

What Trump did was address our very deepest need, the need to mollify the anticipation of extinction. He accomplished this by providing scapegoats for our untenable predicament. Mexicans, Muslims and an “illegitimate” black president were responsible for the jeopardy in which we find ourselves. His posture in this respect was, I’d argue, more crucial to his election than his promises of jobs and economic security. Hillary Clinton, on the other hand, offered programs and policies that, devoid of monsters posing existential threats, were limited to the wholly rational. Contrary to how it may often appear, people do vote in their best interest. Hillary failed to recognize what, at bottom, we truly want.

I don’t know what man-made horrors await the planet in the coming years. I do know they’ll be impervious to history and abundant and that the unacceptability of death will be at their root.

Well that’s not true, he didn’t create scapegoats period. What he did do was call injustices out for what they are where constantly lie to us and claim they don’t exist.

Trump addressed our real needs as a country, not groveling to the Utopian calls to Socialism, Globalism, and AGW.

Jesus took care of removing the fear of death, Trump, while far less capable, is trying to right the ills inflicted on the average American by the previously listed Utopian assholes.

I think that the OP has Utopian and Rational mixed up.

Well said PH. Got into an interesting discussion relative to “reasonable fear of death or grave bodily harm” in a class the other day.

I don’t fear death, never have, all I’ve ever feared is that my life might be wasted.

I was involved in an incident many years ago I think you’re aware of. The cop asked me if I had a “reasonable fear of grave bodily harm or death”. I said know but I was afraid they’d hurt the girl.

He looked at me like it was some sort of revelation and I explained.

People don’t get the difference between fearing death and reasonable and prudent avoidance of any premature instance of it.

(And to ANYONE that think this is off-topic, please loop back to my list of stupid Utopian ideas…)

Humans do not deserve Utopia.
And we didn’t choose to live in a utopia to begin with.
Earth is a testing ground of sorts, never intended to become Heaven.

Blaming Trump for this setup is proverbial barking up the wrong tree.

It’s pretty simple, too simple for most I think.

We require, that is, human surrogates for evil who are at the very least potentially vanquishable. Persons of races, cultures, religions, nationalities and sexual orientations different from ours serve this purpose well.

You came here just to project your own Jungian shadow upon the rest of us?

You could have said hi first, and then told us that you were going to publically shit on a podium and blame the stink on us.

But not everyone’s mama taught them manners.

Hillary Clinton, on the other hand, offered programs and policies that, devoid of monsters posing existential threats, were limited to the wholly rational

Oh…and BTW, Haitians might not agree with your assessment of the Clinton witch. 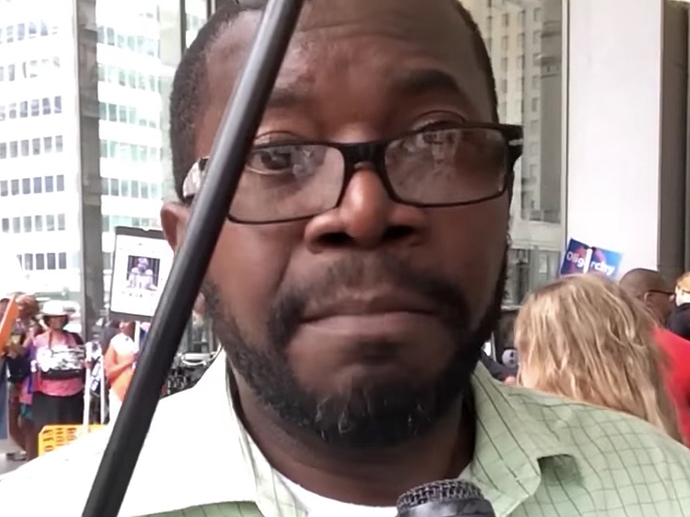 We Are Change: What Hillary Clinton Did To Haiti, Will Scare You To Not Vote...

From the YouTube account of We Are Change: In this video Luke Rudkowski interviews Haitian American Joseph Mathieu a member of the Haitian community that has been in the streets protesting against Hillary Rodham Clinton.

Actually Hillary and her cult of libs offered only her vagina as her most important qualification. 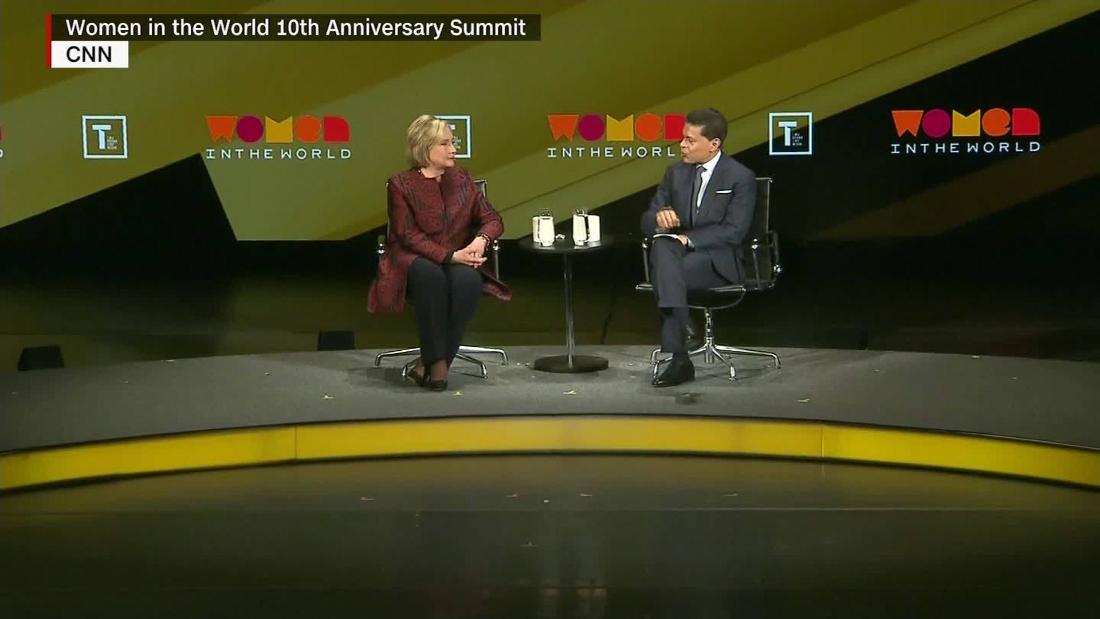 Hillary Clinton says New Zealand PM Jacinda Ardern's example shows how a female leader can have "the heart, not only of a leader, but of a mother."

If our democratic principles (housed in the Constitution of the United States…a democratic REPUBLIC) disintegrate, it will be at the hands of liberals who circumvent the Constitution and promote such anti-American activities as spying on political opponents…with the aid and weaponizing of powerful government entities such as the CIA, FBI, IRS, … (like those of the Obama administration did…and are now being called to the carpet for doing).

You say Hillary’s offerings were “programs and policies that, devoid of monsters posing existential threats, were limited to the wholly rational.”

The first is definitely not true. Her programs did include existential threats to our freedoms in that she would have continued Obama’s push toward Marxism, socialism and finally to communism.

That they were “wholly rational” is subjective. A liberal would accept them easily. A sensible, patriotic American would not.

Hillary Clinton is beyond all doubt the sleaziest, most corrupt, dishonest Presidential candidate since Barack Obama.

Liberalism is a mental disorder. If I ever become a liberal while retaining my memory, I will shoot myself.