Why is Biden delaying his VP announcement?

Is it because the Clintons are still figuring out a way to shoo-in Hillary as a VP after Senile Joe resigns after a year in office? After Killary is shoo-ed in, it is not incoceivable for the sitting president to be Arkancided or something. Or maybe, pin the blame on the Russians or something.

No need to killery him. There are plenty of mental problems with him which can be used as an excuse for his untimely retirement.

From what I heard, the replacement will be a black female.

No way is Hillary going to be chosen as Biden’s running mate. She is too white and not radical Leftist enough. Maybe AG with a sole mission to put Trump in prison as an example to anyone else thinking of defying the Democrats.

That dope can’t remember what office he is running for and now they want him to choose a running mate ?

Is this really who the demonRATS want as their very best candidate , REALLY ?

GOD HELP US IF HE GOES WITH BIG D MIKE . 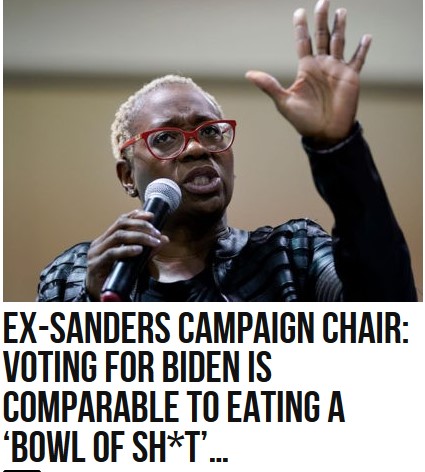 No, I believe it’s really simple: they are still wedded to the conventional wisdom that thinks it’s interesting to people to wonder who it will be. The Democrats didn’t learn anything from the Trump revolution (neither did much of the GOP) and they still think that all of the conventional wisdom that Trump turned upside down is still golden. Go safe with Biden, get an attack harridan for VP, roll out the smears.

Ya have to catch Uncle Joe in a lucid moment, when he remembers he’s running for president.

No way is Hillary going to be chosen as Biden’s running mate. She is too white and not radical Leftist enough.

But she is Deep State personified. Did the views of majority Democrats ever matter? Otherwise, Bernie Sander would have been the Democrat challenger if a radical leftist was needed. Biden is not a radical leftist. In fact, one wonders where he stands on anything cept to read from a scripted palaver of nonsense.

Go safe with Biden, get an attack harridan for VP, roll out the smears.

The Democrat party if full of ugly attack Harridans. The delay over a choice is suspicious. I am inclined to believe in a surprise candidate.

What is more important is who the potential VP will choose as her own VP after senile Biden relinquishes office after a year max. I am still inclined to believe it would be Killary who will initially be in the new cabinet as Secretary of State.

Another theory is that the Demo-Rats intend to lose and keep disrupting US society over a variety of woke issues until a quasi-Marxist revolution is accommodated by the government. It’s a long-shot theory, admittedly.

Ex-Sanders campaign chair should know what eating shit it like too !!!

Because Oprah hasn’t said yes yet.

Keep it until the last possible moment so the person can’t be vetted in the news.

She isn’t in the mix . What in the world could fat Oprah offer any how ?

Lighten up on old Joe he’s trying to make a decision. After all he’s been a Senator since he’s been 29.

What in the world could fat Oprah offer any how ?

That’s exactly why “they” may want her.
“They” already know whom but haven’t told Biden yet, because “they” know he will spill the beans and screw up everything.

She won’t she is friends with Trump and they go back a long time, besides there is a short list such as: That’s exactly why “they” may want her.
“They” already know whom but haven’t told Biden yet, because “they” know he will spill the beans and screw up everything.

Precisely. But it may not be Oprah though she seems like an “ideal” candidate for Creepy Joe. The problem with Oprah is, she may not want to give the VP’s post to Hillary once she becomes president.