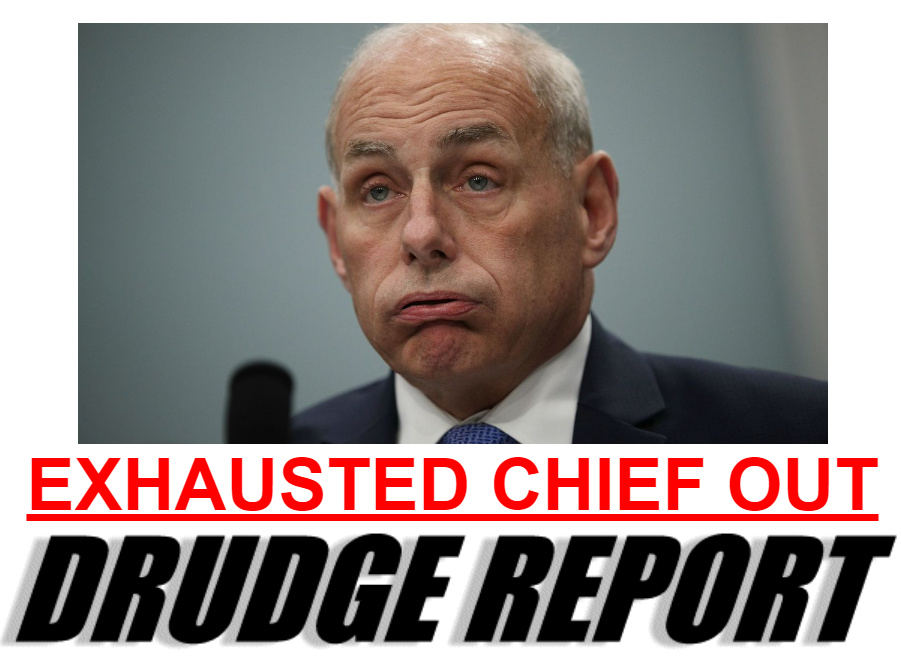 This is CONFIRMED by Drudge Report.

Kelly out. Again, another shake-up coming before the storm. Trump is getting ready for war Jan 1, 2019.

Now if only Trump would purge every single neoconservative from his cabinet and administration. Oh - and about those Obama appointees still occupying seats…yeah.

Reminder: there have been no less than two John Kelly about to resign stories every other week since he came into office.

I think this is mostly gossip perpetuated by CNN. They want to seem relevant. No source from the administration has validated this claim and CNN is only using the term “senior WH official” which means it’s probably from the guy in the mailroom.

There does seem to be some considerable tension between the two… more than once it has come to light that either Kelly is cut out of a conversation or he and Trump have … had words.

That is because Trump wants to replace Nielsen as HLS head with Thomas Homan former chief of ICE! It is a controversial move but a wise one on Trumps part if indeed the rumours are true! Kelly and Trump are not in agreement with this because Kelly groomed Nielsen for the current position she holds. Then again, this is all speculation but this is what I read into why there is tension between Kelly and Trump!

Exactly. We have heard this story many, many times already.

What I find interest is this.

It is unclear who will replace Kelly, but a reported leading contender is Vice President Mike Pence’s chief of staff Nick Ayers.

Why? Unless they’e looking for smooth transition into Pence’s presidency.

No I’m not talking about possible impeachment but that Trump may not run in 2020.

I worry that is the case. While I would wish Trump to use his position differently, I do not see ANYONE who could replace him for direction or tenacity. Anyone other than Trump is simply a smoothing out the ripples in the swamp and back to the world that was before he was elected. I do think that he was absolutely unprepared for the amount of pure vial that has poured from the left… a fair amount of the ‘right’ and of course from the careerist establishment. I would suppose that even Trump has his limits because I’m not certain that the end of the Mueller investigation would be the end of the haranguing and obstruction that surrounds him… I mean, apparently he didn’t even know about the pending arrest of Meng Wanzhou as he was meeting with XI… willfully withholding pertinent info from the elected president should be treason but nothing much is being said about it.

Much of his agenda has been torpedoed by his own party and I don’t know if, even with his resilience, he has the desire. Rah Rah for the Judicial appointments … I guess that buys the right a few years to do… whatever it is that they wish to do… what ever that is.

Allegedly Ayers is a very ambitious guy and wants the job. It’s also alleged Trump is considering replacing Pence on the ticket for 2020. All rumor of course, but one thing we do know for certain is at least one person on the D ticket will be a woman and/or minority.

I’ve just seen this off the wire.

Apparently Nick Ayers will not be president Trump chief of staff.

Personally I’m not sure about Munuchin…I think where he is now is perfect spot for him.

As for Mark Meadows…I do find that intriguing. and of course his seat is safe for conservative replacement.

More interesting part is Nick Ayers going to start pro-Trump super PAC. Which I guess he wanted to spend some time with his family and prepare for Trump reelection in 2020.

As for Mark Meadows…I do find that intriguing. and of course his seat is safe for conservative replacement.

His seat is save perhaps but filling his position in the freedom caucus might be a bit more difficult. As for becoming chief of staff… while he ‘might’ fall into the job famously, while that actually advance Trump’s agenda during a time period of democrat supremacy in the House. Trump fell out with the freedom caucus on several different occasions so I don’t know that having one of them as Chief of Staff will alter or support Trump much better than Kelly.