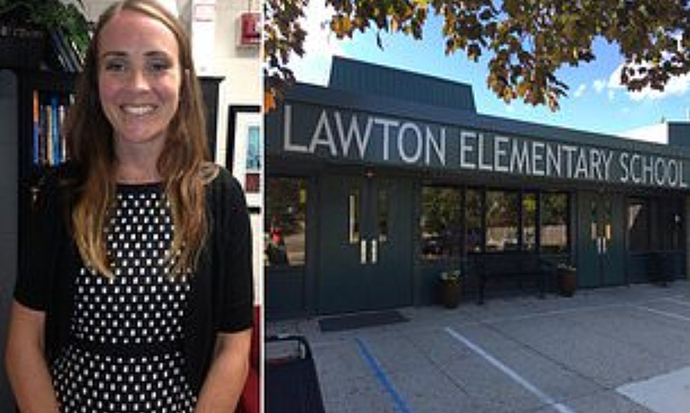 The tide is starting to turn. The fire is beginning to rise. 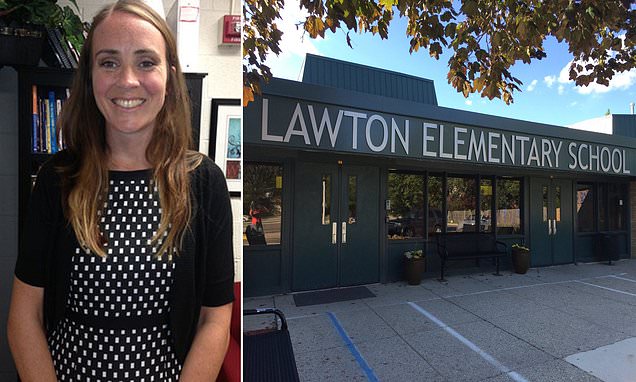 Former principle Shannon Blick, 39, is suing Ann Arbor Public Schools for what she claims is racial discrimination after she was removed from her position in favor of an African American principle.

More whites need to be doing this. We need to coordinate a civil rights movement for whites.

Bless her courage. Here’s another front in the war. This mestizo is an arch anti-white: 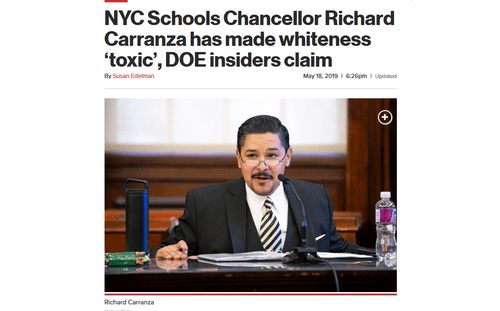 "At least four top Department of Education executives who have been demoted or stripped of duties under Carranza’s sweeping reorganization are poised to sue the city, claiming he has created “an environment which is hostile toward whites,” a source told The Post.

“The women — all white, veteran administrators — contend they were pushed aside for less qualified persons of color.”

Personally I find these types of situation sickening. My generation fought like hell for equal rights for all and equal protection under law because both were right.

Somehow in the last thirty years the civil rights movement was hijacked by those seeing not equality or justice but revenge.

Perhaps worst of all in cases like this they are targeting their own fellow white liberals and destroying the very people responsible for creating the environment they race hustlers are now taking advantage of.

I hate to say it but I hope there are dozens, even hundreds of similar cases popping up all over the country in the next six months as they will only add a whole lot of fuel to Trump’s reelection and the republicans fighting to regain control of the house and increase their lead in the senate.

The only way to undo these injustices is to give Trump another pick or two for the supreme court seating more solid constructionists/conservatives, and another four years to completely change the face of the lower courts by breaking up the 9th and seating more justices than any president in US history before him.

We have a near endless pool of solid conservative/constructionists available for the currently vacant seats and new seats to be created as the 9th is broken up and new districts created across the US to alleviate the current backlog of cases.

Additionally four more years will give Trump the opportunity to add hundreds of new immigration courts and increase the numbers of CPB and ICE to levels where they can actually perform their duties in an efficient manner.

We need to double or triple the numbers of BP field agents working the 150mi zone and increase the numer of ICE agents by at least four to five times for them to have the numbers necessary to be effective while we finish securing the border and the only way that happens is if either Trump, Cruz, or someone of similar beliefs and strong character is in office.

I get sick to death of the “This is the most important election of your lifetime” meme we’ve heard since 2004 but the truth is, each succeeding election has been.

The left has gone completely off of the map in this country and if they gain control I see no way the US can continue to exist as currently constituted for more than another decade or two.

As democrats continue flooding the country with low or no skilled illegals our economy will only worsen, UE will escalate, wages will reverse, stagnate, and then flat go backwards again to levels we haven’t seen since the 70’s.

Right now we are being blocked from even attempting to ascertain how may people are in the US illegally because if those numbers are published democrats are going to lose in 2020 in the biggest landslide since Reagan.

We’re being blocked every way possible by democrats in our attempts to find out how many illegals are actually voting as well as all other forms of democrat organized election fraud and they are enabled by leftwing activists in the judiciary, and most certainly by the press.

What else are they not telling us?

Well these are the same people who were warning us 2 years ago that by 2030 2/3-3/4’s of the low end, low skilled jobs in the US would be gone, with those workers replaced by robots, computers, and AI’s, along with many lower and middle management jobs.

They don’t want Americans contemplating what the US is going to look like when 30-60 million jobs held by illegals, “refugees”, and their children are simply gone and there are no jobs to replace them.

Not only is this the permanent dependent underclass that democrats are counting on to grant them, permanent, unlimited power in the US they are the people most likely to rip the country to shreds violently when their children are starving, their jobs are gone, and the welfare state that promised to support hem has collapsed.

Uncontrolled immigration is the single largest threat to the stability and continuation of the US and the democrats swear that Immigration isn’t a national security issue at all, it’s a human rights issue.

Well, what about the human rights of the 300 million or so of us who were born and raised here or followed the legal immigration process to become legal residents and citizens?

What human right is it that says we should give up the greatest country on earth to wave after wave of uneducated rabble who will collapse our economy and welfare state completely?

What about our kids and grand kids? Where will the be able to flee to, to start over?

When my movement regains power in Boston we will eliminate government control over the public education!
We will return to school houses. We will offer vouchers to help parents transition their kids into private schools .
Home owners that use there house for education will receive tax breaks.

School house make their own rules, as long as it doesn’t break the law.

You realize there’s probably zero chance such a movement could ever attract enough attention, much less support in any major metro area in the US much less Boston don’t you?

Why not? I think the outcome of thousands of inner city school grads that are struggling want a change…
it’s obnoxious to think they are going to sit idle as the city refuse to allow middle class jobs to be developed in the city. We need to compete for the new jobs or be smart enough to fight corrupt regimes that over see our city.

More whites need to be doing this. We need to coordinate a civil rights movement for whites.

It’s really getting to that point, isn’t it? We are fast becoming a minority and are being labeled as all racist villians. Nothing could be further from the truth. If we start to organize we will be further vilified but I really don’t see any other option. We need to come together and look out for ourselves.

Demographics. Democrats have been killing off the middle class one job at a time since the mid seventies and they are in full blown job killing mode now.

Unless you’re one of the wealthy elites or at the very bottom of the economic ladder making you completely dependent on the gov’t you don’t mean squat to them.

They have now completely abandoned the middle class in favor of flooding the country with aliens who will work for nothing at mobs most Americans think they are too good and/or overqualified for who will be come completely dependent on gov’t in another decade when most of those jobs have been replaced by computers and robots.

I think a lack of awareness is pretty obvious, and I plan on hitting the streets talking to as many people who are out of opportunity’s and offering them a solution.

Raise money and get the word out… I don’t plan on letting my city go with out a fight.

I was in Boston a few months ago for a conference. It’s a beautiful old city completely infested by screeching leftists. Godspeed.

I promise before I die Boston will be the first major city where urban areas vote non democrat in about 80 years.

I hope she wins every penny. Stories like this keep popping up more and more. When one group of people continuously loses out because of the color of their skin, that’s racism. Folks wonder why white people are getting pissed off.

That was an excellent post @TWR thanks for taking the time to write it!

So much for Affirmative Action. It’s to naive to believe there isn’t reverse discrimination.
Why replace this excellent administrator with someone no smarter than a baboon because she’s guilty of being white.
Schools no longer educate students. They’ve become INDOCTRINATION CENTERS to " REEDUCATE" students into " RIGHT THOUGHT and SPEAK " and suppress those in opposition.
Of course there isn’t any National Media on this because it would reveal how suppressive the Leftists are.

Quotas and Affirmative Action are plain and simple DISCRIMINATION .
It rewards an uninjured party by punishing an innocent victim . Today the majority of federal contract are GIVIEN to minority business owners , and the majority have little to no knowledge about that type business . They don’t even have to be the lowest bid !!! DISCRIMINATION IN THE FIRST DEGREE !!!

What ever happened to the simple axiom, “two wrongs don’t make a right”?

Yes, Qutas and Affirmative Action penalizes those students (minorities or others) that actually study hard and do well on the SAT or ACT.
IT’S used as an excuse to pander to minorities about "white privilege " instead of improving the schools.

It’s supposed to be a payback to level the playing field for harms done years ago.

In reality it punishes the innocent, particularly high achieving white and Asian students and rewards minorities who’ve done nothing to deserve the advantage.

Our constitution forbids “corruption of blood”, we are not responsible for the sins of our ancestors yet they keep finding ways to justify doing just that.