Whistleblower slams Apple for 'wiretapping entire populations', revealing that Siri was listening in on users’ intimate moments and sending recordings to be ‘graded’ by contract workers

You dont have the world in your pockets. They have you in their pockets.

A former Apple contractor who pulled the curtain on the tech giant last summer, exposing an inside program that listens to user’s Siri recordings, has made himself known to the world.

Thomas le Bonniec worked under a Siri ‘grading project’ that gathered snippets of audio in order to improve the smart assistant’s accuracy.

Last year, le Bonniec revealed to The Guardian that while working for Apple he heard private and sometimes intimate recordings including medical discussions, criminal activity, sex and official business talks.

The whistleblower had initially remained anonymous, but has revealed himself in protest against the lack of action taken against Apple for ‘violating fundamental human rights’ - and he has done so with an open letter to European privacy regulators stating his concerns.
‘There’s not much vetting of who works there, and the amount of data that we’re free to look through seems quite broad,’ le Bonniec told the Guardian in July.

‘It wouldn’t be difficult to identify the person that you’re listening to, especially with accidental triggers – addresses, names and so on.’

Daily Mail has reached out to Amazon for comment and has yet to receive a response.

The letter, which le Bonniec sent to all European data protection regulators states: ‘It is worrying that Apple (and undoubtedly not just Apple) keeps ignoring and violating fundamental rights and continues their massive collection of data.’

‘I am extremely concerned that big tech companies are basically wiretapping entire populations despite European citizens being told the EU has one of the strongest data protection laws in the world.’

‘Passing a law is not good enough: it needs to be enforced upon privacy offenders.’

Le Bonniec held a subcontractor position at Apple’s Cork offices where he listen to snippets in both English and French until resigning in 2019.

‘They do operate on a moral and legal grey area,’ he told the Guardian at the time, ‘and they have been doing this for years on a massive scale. They should be called out in every possible way.’

He continued to say that he would listen to thousands of recordings every day and from a range of Apple devices, including iPhones, Apple Watches and iPads – any device that included Siri.

And all of the activity was done without the user’s consent.

However, le Bonniec noted that it was not just the owner of the device’s conversations they were harvesting, but they sometimes included relatives, friends, children and colleagues.

Apple had admitted to the unreported practices following the activity being exposed in July 2019.

A small portion of Siri requests are analyzed to improve Siri and dictation. User requests are not associated with the user’s Apple ID,’ said the company.

‘Siri responses are analyzed in secure facilities and all reviewers are under the obligation to adhere to Apple’s strict confidentiality requirements.’

Following the 2019 report, Apple released a statement addressing the concerns.

‘We know that customers have been concerned by recent reports of people listening to audio Siri recordings as part of our Siri quality evaluation process — which we call grading,’ reads the announcement.

‘We heard their concerns, immediately suspended human grading of Siri requests and began a thorough review of our practices and policies.’

‘We’ve decided to make some changes to Siri as a result.’

However, according to the open letter, Apple may have yet to turn their words into actions. 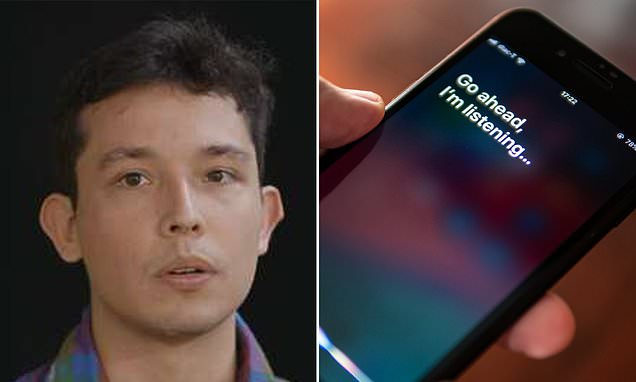 A former Apple contractor who exposed an inside program that listens to Siri recordings, which included criminal activity and sexual discussion, has made himself known to the public in an open letter.