When is the Next Recession? SOON!

Interesting interview with Jeffery Gundlach as he touches on many subjects regarding the US national debt and the percentage of debt to GDP, taxation, and current politicians telling bold face lies about affording massive entitlement spending, and the troubling signs within America’s political discourse. With immigration as the biggest issue in regards to funding, that alone if allowed to continue in its current trajectory will exacerbate a major recession. 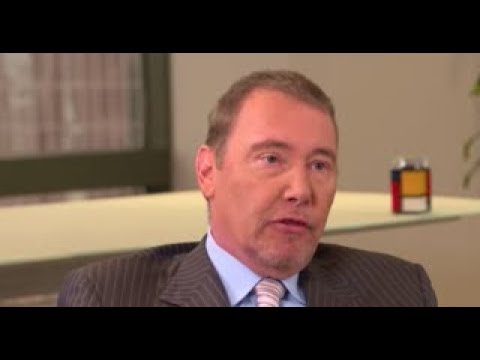 I listen to the financial radio shows driving to and from work and the talk of recession has been a common topic. The fact is that economic cycles are cyclical and that just the law of averages can come into play.

Yes the law of averages, but something that tells even more is what people don’t realize, is yes this border crisis is a very serious problem, but more importantly, its going to exacerbate a major recession. It is estimated that at the rate of 70+ thousand new asylum seekers apprehended at the border in February, that number will continue to grow as the warmer months approach, and by the end of 2019 there will probably be over 1 million that would have already entered the country. The national debt is already at 22 trillion and climbing fast, and it costs the tax payer $376 dollars a day just to house and feed them, (do the math) and that is not including the cost of medical care that is being administered to a large percentage of these invaders. Of course the Democrats know this and are perfectly fine for pushing massive increases in new taxes to pay for this, which is why they keep saying “its a manufactured Crisis” when in reality the only tool they know how to use is to simply raise taxes such as pushing for a 70% marginal rate in the “New Green Deal.” But we are not talking some small percentage points here, we are talking major increases to pay for all the entitlements that The Democrats want to roll out should they get control of both houses in 2020. It simply is not sustainable. We can not afford it, and thus even though the economy is growing and is at 3% GDP, the Treasury is going to be spending more than its taking in, and thus is a real problem. Plus add in the fact that Treasury yields is extremely low, and the corporate bond market is extremely over leveraged and you get a recipe for disaster. Like this guy said, the next recession is going to be very volatile, and the current immigration crisis is only going to exacerbate it faster. Anyway, that is what my gut is telling me right now.

I’m completely with you that importing poverty into the nation is moronic economics, and can be one of the factors that bring about a recession. I don’t know if that would be the primary factor domestically since a recession would entail significant decreased spending by the middle class.

I don’t know if that would be the primary factor domestically since a recession would entail significant decreased spending by the middle class.

Well if they have less disposable income due to being taxed more then it certainly would contribute. I think it will be a combination of all factors, but the cost of illegal Immigration not to mention the importation of low skilled workers is a big one! Also if you think about and add chain migration to that equation and it gets even worse. Another aspect to consider is that our future economy is on the current trend into AI, which means a lot of these people, if they end up staying in the country will be displaced and dependent on Government assistance to survive. That is completely insane, and should provide impetus for a major revolt!

History is the best teacher.

With immigration as the biggest issue in regards to funding, that alone if allowed to continue in its current trajectory will exacerbate a major recession.

Especially when millions of non-US citizens are using services and benefit systems that were put in place for American citizens only. Medicaid is a good example of this. The system is completely flooded by non-citizens who use it for everything - including as a justification to get other benefits on the welfare gravy train.

I think his insight into our political disposition is what troubles me the most, and he rather lays it out in pretty stark terms. I can’t imagine congress and the Senate picking our Presidential and Vice Presidential candidates, especially from opposing parties, but I agree there is nothing I could disagree with, and was mesmerized just listening to him talk.

We need to get a handle on it soon, or else the country will spiral out of control in a sea of endless debt. (See Greece)

I listened to Grundlach, a very interesting piece. The rate of growth of the US national debt is astonishing. I see nobody doing anything about it (except maybe Trump) because corrective measures tend to lose votes. I conclude that a bout of intense inflation is in the pipeline. I have no idea when it will happen.

Regarding recession: This morning ( 00:00 ET ) I was listening to some industry commentators. The Chinese trade balance had a massive under-performance dropping by around 90% of typical. That is seen as indicative although observers were keen to point out that the Chinese New Year has a big effect. Therefore attention was drawn to some other feeder economies which are thought to be leading indicators. Countries such as Vietnam, Phillippines and Australia who rely on or trade heavily with China and would likely show the earliest indication that all is not well.

There are European economies struggling. Germany posted a -ve number and Italy is now technically in recession. So I guess that within the US you will start to see the effects of some of that depending upon how much of the US economy relies upon export trade.

My feeling is that a world recession is already here, we must wait to see how bad it will become.

That is seen as indicative although observers were keen to point out that the Chinese New Year has a big effect.

Well, currently being here in Asia we are beginning to see signs of a recession. We have only signed 1 client so far at the company I am contracted with and many are seeing growth in China drastically slowing down, where a lot of our clients come from. I don’t think the Chinese New Year especially being its a month removed from its conclusion has really had any effect on this. When speaking of China, it appears to me, there is a lot of going on behind the scenes in terms of their monetary policy that has many worried. Hedge Fund advisors such as Kyle Bass goes into great detail as to why. 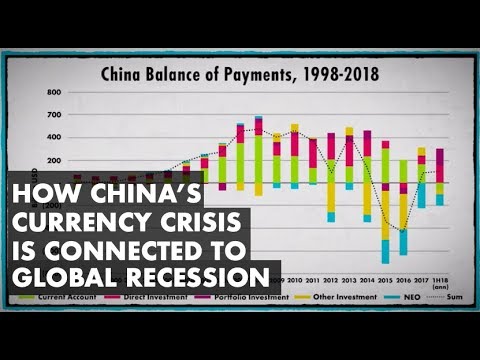 Basically many of things Mr Bass is articulating is something I have been onto for quite sometime, so I am actually surprised to see someone of his reputation openly talk about this issue of China and their non transparency regarding their monetary reporting. The signs don’t look good for China right now, and just as you indicated SE Asian countries who do a lot of trading with China, are starting to see certain slow downs, particularly Australia.

Factor in the upcoming BREXIT issue and currently France and their yellow vest movement, there seems to be some credence that a European Spring is on the cusp of breaking out when the weather starts turning soon. Italy for all intensive purposes will be leading the way, as they made clear they no longer want to be part of the European Union and so their recession currently is probably something that is happening due to their wanting to get their house in order in terms of monetary policy and their volatile political climate. In the aggregate of all these variable, I think you are right that a Global recession has begun. What and how we come out on the other end is the dangerous unknown and remains to be seen how it shapes up. I am trying to be optimistic. What is the saying? “Plan for the worse hope for the best”? That is my sentiment right now, as there are so many variables its is hard to predict where all of this is going.

Even Thomas Sowell is predicting a recession is coming. Even Thomas Sowell is predicting a recession

Sounded like he predicted a lot worse than that

Yes he did, but his view was more long term than the issue of the oncoming recession. Nevertheless, he is a brilliant man, and hearing him say “I don’t think America is going to make it” is pretty demoralizing in many respects. The way things are going with our political class I am starting to have some serious doubts!

You are correct on all fronts Lou. I believe the traffic lights is turning to yellow now, and we maybe getting there sooner rather than later for reasons I outlined in this thread earlier.

The part that concerns me the most is if we DO go into a recession, Trump’s gone and some dipshit from the left will be the new president. Couple that with a leftist house & senate and we’re looking at the perfect storm for another depression. . . and people will be stupid enough to believe that it was Conservative policy that created it … again… Liberalism is a mental disorder.

The Keystone Keynesians have already pushed us over the edge.

And now the idiots of the maleducated Left, whose outrageous accents come from their elective ideology rather than from being honest poor dumb scum, are increasingly no longer feeling the need to hide who they are. If from existing in the echo chambers of what passes for academia too much of the time to their enclaves of conformity trumpeted for individualism (so individualistic that you can hardly tell them apart) it matters not: that they are so bold indicates that the cancer they represent has metastasized.

It won’t last though.

It would take next to nothing to encourage national rivals that now is the time to end the Petrodollar. Once that happens the bankers that really, really matter will no longer be able to get rich off of the churn as inflation steadily consumes what everyone else has built up. At that point the house of cards will fall. 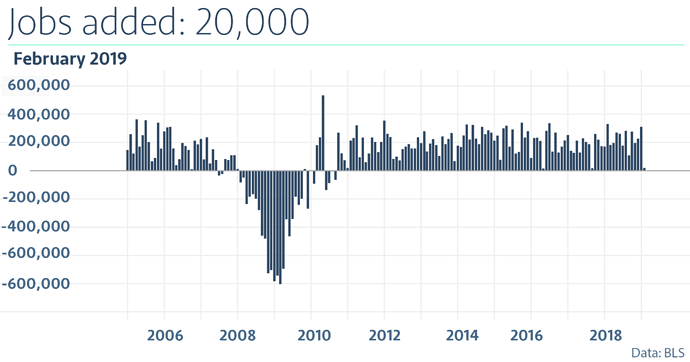 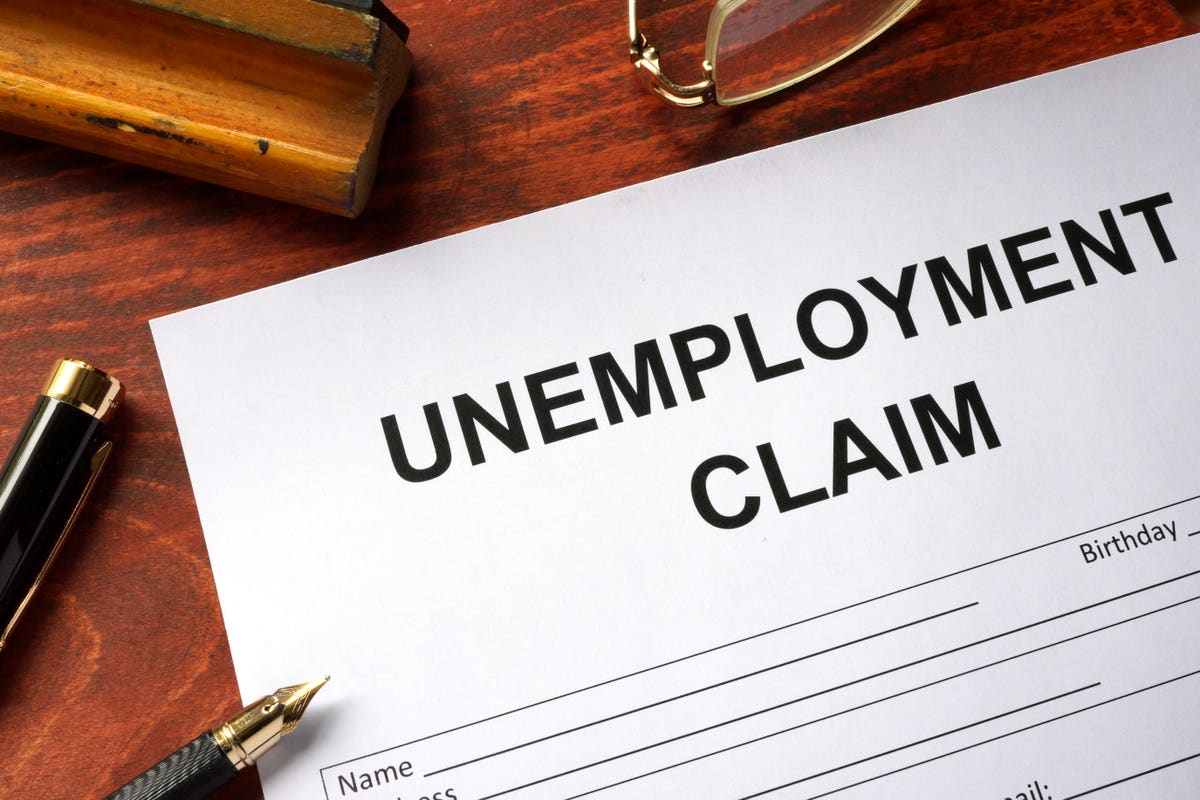 Why The Just-Released February Jobs Numbers Are Disappointing -- And Why That...

The much-anticipated February Employment Situation Report was released today, showing only 20,000 jobs added. Despite this, unemployment fell to 3.8%. However, this has done little to relieve the concerns of those worried that the expansion may be...

Why was this release much-anticipated? For one, the January Employment Situation report (released in February) was unexpectedly positive, especially in light of the government shutdown. Observers were anxious to know if this represented a trend or was an outlier. Second, other recent signals regarding the US economy had been mixed at best. There was already concern that the current expansion could not last much longer and then the OECD lowered its forecast for world growth. This is bad news for US exporters, particularly in light of the fact that the Commerce Department announced on Wednesday that the US trade deficit is the largest in a decade. In addition, small business confidence hit a two-year low in February."