What will happen to a community when surrounded by a different race (for centuries)?

The point I’m trying to make with this example. 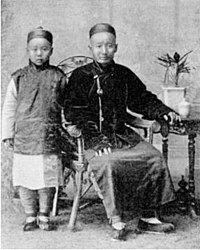 The Kaifeng Jews (開封猶太族, Kāifēng yóutài zú) are members of a small Jewish community in Kaifeng, in the Henan province of China, whose members had largely assimilated into Chinese society while preserving some Jewish traditions and customs. Their origin and time of arrival in Kaifeng are a matter of debate among experts. Most scholars believe that a Jewish community has existed in Kaifeng since the Northern Song Dynasty (960–1127), though some scholars date their arrival to the Tang Dynasty (618–...

The white race will disappear real fast, if it doesn’t defend itself from its enemies within

Read your own citation. There are still ■■■■ in Kaifeng today.

This is more click bait , stop responding to his nonsense .

The way I see it if he wants to make a fool of himself continually I’m happy to oblige.

What matters is people with any sense will understand.
What foulmouthed idiots say is irrelevant.