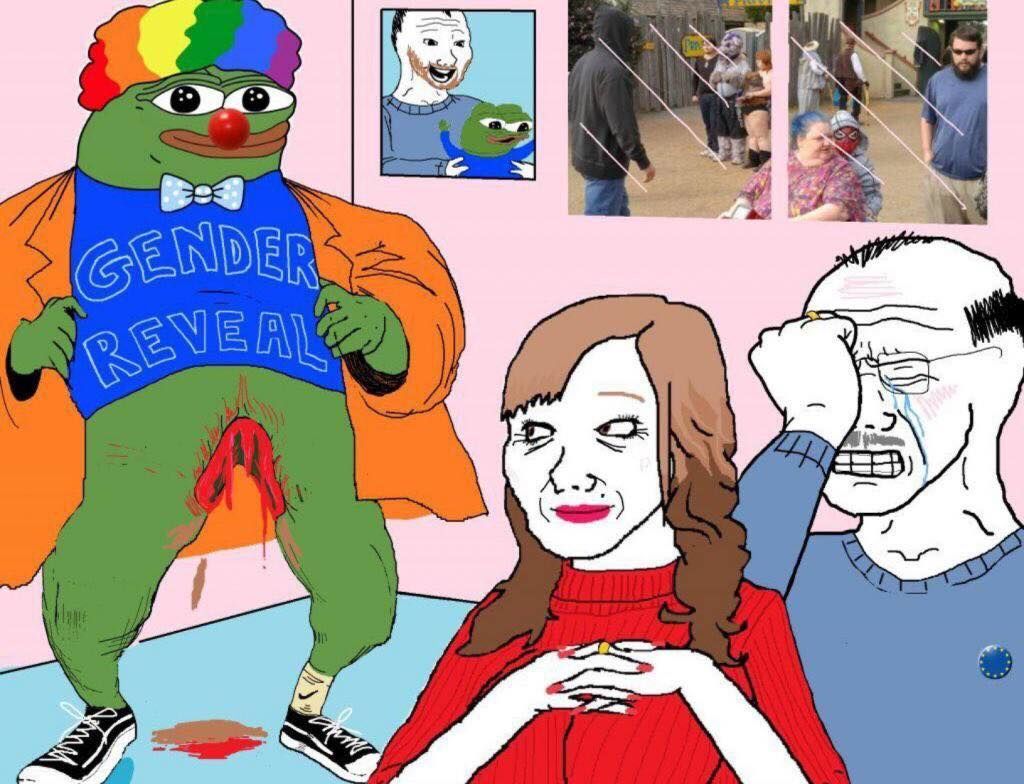 The most violating aspect of Clown World is the pretending that one is forced to do.

We’re forced to pretend blacks are geniuses and moral paragons.

We’re forced to pretend Whites are as likely as blacks to knock out strangers on the sidewalk.

We’re forced to pretend the tens of thousands of asylum seekers are fleeing political persecution instead of taking advantage of American gibs.

We’re forced to pretend a petite woman can kick a man’s ass with the right attitude.

We’re forced to pretend the biological sexes are social constructions.

We’re forced to pretend diversity is a strength instead of the very obvious misery it is to native americans.

And on and on.

The purpose is humiliation of the population. Mission accomplished.

Forced association, forced speech, forced diversity, indoctrination and censorship: there’s nothing “liberal” or “tolerant” about any of this, they’re just using those words because they still have some semblance of a positive connotation.

I don’t play by them rules.

It forces everyone to live a lie. It forces us to lie to avoid being publicly vilified.

These are sick times.

Life in Clown World is solitary, nasty, brutish, and short.

It does come with one huge positive: People are becoming much more aware of the JQ and sympathetic to anyone who holds an “extreme” position.

Just embrace Clown World. We passed the point of no return during Trump’s first year in office. He hasn’t done anything to slow it down or reverse course. In many respects, he’s made it worse especially when he lets his own base get take a beating. If you just stop caring about what happens next and find a way to live and work away from civilization…fuck it. Let it all come down.

Yep, the conservative puritans of the 1960’s declared the end of the US as we knew it watching the youth rebel as they embraced their new liberties.

I was there, and that’s another lie. There were minorities on both sides, the left more vocal than the right.

I don’t play by them rules.

They’re not really even rules. But civil liberties are about constitutional equality.

It seems you guys are fine with force when it comes to behavior that you support.

I am fine with self defense, and sooner or later the lefty antifa/Nazi/snowflakes who think it okay to physically attack children and old women will find themselves at room temperature.

Yep, the conservative puritans of the 1960’s declared the end of the US as we knew it watching the youth rebel as they embraced their new liberties.

New liberties…like spreading disease through free sex while getting high and hooked on drugs…and not contributing anything to society…while people less fortunate than them were drafted and sent to war only to be spit on when they returned?

And there’s a Puritan now.

It’s true though. Selfish boomers are to blame for this country being as shitty as it is. They were the ones that started the flow of drugs into this country.