What is Wrong With Society Today?

I think that we’re becoming far too “Politically Correct”. Everything said and displayed throughout media etc are just so toned down in an attempt to not hurt anyone’s feelings. It’s no different than lying because people are intentionally omitting the truth on a variety of issues because things keep getting more and more offensive to more and more people.

What do you all think? 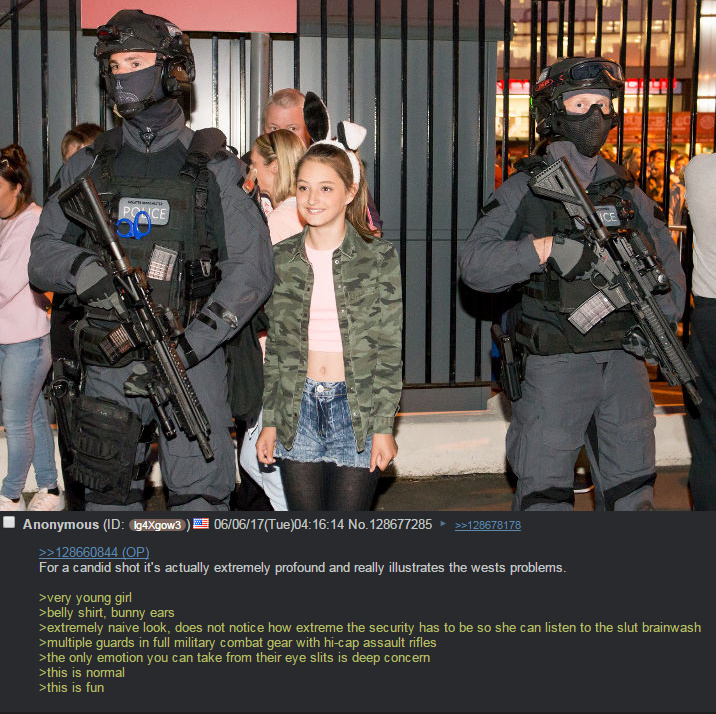 … I hope he doesn’t run with those scissors.

I’m sorry I don’t understand your comment as it relates to what I posted.

Well, I’d say that primarily that the problem of modern society is that people don’t think for themselves. We live in the age of information, and currently spreading information is easier than ever before, we get fed with information constantly everyday, people start to become like robots who repeat everything the media says, or a celebrity says, and they stop forming their own opinions and stop thinking for themselves, and when that happens people are easily manipulated and that is a very dangerous thing. Also, almost everything is biased nowadays in one way or another.

I’d also say that people are way too self-centered and egoistic nowadays also due to social media and the obsession of obtaining likes and fame.

You asked what was wrong with society.

I (humorously I had hoped) attempted to illustrate what is wrong with society by mimicking what the people who are messing up the society obsess about: things we do not threaten anyone even as they turn a blind eye to things that might because of stuff like that would make them “islamophibic” or similar guff if they did.

Which is to say: whatever is the reason they need guys like this at a place where young ladies like that are going.

If the joke failed it wasn’t your fault.

Enough said, really. I mean, there is just so much wrong with that generation. By far and I really by an absolute landslide the most insecure about their own sexuality. In fact, orders of magnitude more insecure. Just as an example, have you ever seen any generation with more transgenders? I surely haven’t. Never before in no region of the world have I personally experienced or been made aware of a generation that is as insecure about their own gender identity as the typical millennial. And the saddest thing of all… that phenomenon is contagious. So now Gen X and Gen Z are also becoming insecure. facepalm

Also, can’t take criticism worth a damn. Because most of them were brought up with their parents telling them they’re so goddamned special. And now that they’re facing the real world as adults, well… no one is telling them how f-ing special they are. Yeah, that hurts. Still doesn’t change the truth though, you’re not special, damned millennials.

It is also because of this reason that the world is so insanely politically correct. Just dig deeper, go back to where it all began. I think you will find that this whole political correctness started online with people not being able to take anything remotely negative very well. Of course, I am not suggesting discrimination of any kind should be tolerated. But… going the complete opposite way as we have seen in recent years is even worse.

Really, I’m already anxious about the day that a millennial takes up the position of the most powerful individual on the planet. If you thought Trump’s random outbursts were bad… just you wait and see. We’re in for a shitstorm of facepalm in the next couple of decades.

At some point, the leader of the free world is going to throw a temper tantrum over not being told how goddamned precious he/she/it is (purposely not assuming their identity, for all I know, they could identify themselves as an hermaphroditic My Little Pony with an imaginary 10 foot cock and also imaginary vagina that could fit a bus).

Not to sound too pessimistic but wait till you see the kids the Millennials who are already kaput in the wisdom department raise. Who for example don’t raise their kids to have a gender but want to let them have freedom to find out for themselves.

She looks quite nice and normal compared with some other young ladies these days.

I don’t think that most people ever DID think for themselves. As humans, we have sheep like tendencies to follow whoever shouts loudest (e.g. “climate emergency”). Humans have also always been selfish and egotistical, myself included. The major way that our society differs from all other societies of the past is a) or unprecedented material wealth and b) our complete lack of a genuine transcendant focal point. Both of these are deeply inimical to civilizational survival. There is nothing wrong with wealth and consumption per se, but married with a spiritual vacuum, it produces people who are shallow, prone to instant gratification and unhappy. Witness how many young people in the West think they are victims. And all of this is, as Rurudyne says, exacerbated by social media which means that when once we could voice our opinions, now we can yell them, creating a permanent state of hysteria and social tension. Without any hardship or religious belief to hone their personalities, they have only their own egos. We have no real existential threat to sharpen us (no, AGW is not a threat).

From the day we arrive on the internet
And, Tweeting, retreat from the sun
There’s more cat videos to see than can ever be seen
More to like than can ever be liked
There’s far too much to take in here
More to find than can ever be found
But the sun setting low
Though it bid us to go
Keeps great and small on the endless round

Hah! Take that, millennials! Well, at least someone is not blaming the boomers.

The list of things that are wrong is too long for me to type, but I’ll put it concisely: we’ve become too successful. it’s bred complacency and thinking that we’re born to success. Things will get real bad before they get better.

In the past there was a lack of information and young boys were sent to war to fight for the king (and Pope, maybe), without really knowing who was benefiting from the war.

Now young boys are sent to war in distant lands to kill and die because they have been fed TOO MUCH information, fake or otherwise, so much so that they can’t think anymore due to information overload.

I haven’t nailed it; but there is no doubt, something has crept into our midst that should not be there; or something that should be there is missing. What is there seems to be accepted chaos. Fucking spineless crybabies. Fucking spineless liberals, who refuse to see the light. Waaaaaaaaaaaaaaa, I’m tellin my mommy. Life ain’t fair, and it never will be fair; so climb out of the hole, get on with life, or go down in flames. Still, when full blown socialism takes hold, ALL WILL BE EQUAL; except for those running the show. Heh heh heh I remember the breadlines in Russia; and I remember those who drove past the breadlines in luxury vehicles.

Hah hah even the soviet-made limousines were smoke-belching rattletraps

Reagan told a joke about Soviets and cars… In East Germany (German Democratic Republic), you apply for a car when you reach 16, and twenty six years later when you’re 42 years old or so, you may be able to get a small, 2-cycle engine car called “Trabi” Everything is relative.
People get pampered in modern society and take all conveniences for granted.