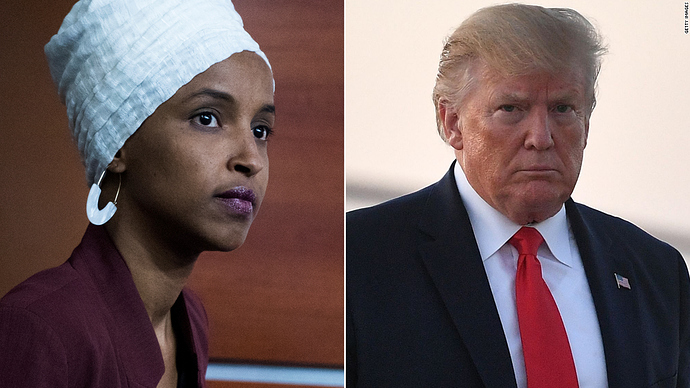 Trump claims to disavow racist chant after pressure from allies

Facing an onslaught of indignation and qualms even from his inner circle, President Donald Trump claimed Thursday to be unhappy his rally crowd broke into chants of "send her back" as he denigrated a Democratic lawmaker he'd previously said should...

Disavowal of his base is major blunder on his part.
Never disavow, never apologize or the left will tear you apart.

The weak shall fear the strong meme is about this, exactly about this.

The three stages of jihad: Immigrate, Infiltrate and Caliphate.

Do we want people here who are not willing to rise up and fix their own lands?

Just to come here and try to destroy ours with their logic?! Fuck off with that nonsense.

Trump should have backed his supporters up and told the left to fuck off. He caved like a little bitch.

None of you should be surprised by this. He allowed himself to get steamrolled just when he had momentum. It’s classic Trump. It’s why there is no wall and the ICE raids never happened.

President Trump didn’t look too happy when the chant started and did look over to the side it was coming from for a moment before he continued speaking and I don’t know if that was some kind of signal to security or what but to me I don’t give a damn what anyone says against Omar whether me myself telling he to go home or its a group at a Trump rally. I share President Trumps opinion of her 1000%! If she doesn’t like it here, get the hell out!

I watched the entire rally, live. Seemed fine when it happened. He nodded. He smiled. Never Apologize.

Operating at the level of a rhetorician and demagogue, being seen to yank the chain on your more enthusiastic supporters is actually a power-flex. It is actually very encouraging to hear the chant at one of his rallies, as it shows a shift in public opinion. Who even starts these chants anyway? Is it his crowd team or is it popular sentiment?

Hmm, never looked in it that way. I would never disavow my followers for such minor triviality just for the sake of principles.

None of you should be surprised by this. He allowed himself to get steamrolled just when he had momentum. It’s classic Trump. It’s why there is no wall and the ICE raids never happened.

His supporters should worry. He is lying like he usually does.

Those chants will happen again and he will not tell them to stop. He will nod and smile.

Those chants will happen again and he will not tell them to stop. He will nod and smile.

That’s exactly what he should do.

Where is home for her?

Should anyone critical of the President policies or America, be told to go home?

Where is home for her?

Somalia. She faked a marriage to her brother and committed immigration fraud. That means her citizenship is based on fraud and she has to go back.

That’s exactly what he should do.

I fully expect him to. He needs that level of admiration to function.

He may TRY during the next rally to quiet the crowd… but once he sees how low energy they become… he will be back to encouraging it.

Somalia. She faked a marriage to her brother and committed immigration fraud. That means her citizenship is based on fraud and she has to go back.

She is a naturalized US citizen, been in the US since she was 10. This is her country, just as much as it is yours.

Being critical of America doesn’t mean someone should leave. If that were the case, Trump should take his own advice.

A paper trail of legal documents, however, undermines Omar’s claim that her marriage to Elmi, a British citizen, came during a split from Hirsi. All available evidence suggests that her legal marriage to Elmi notwithstanding, Omar has always been in marital relationship with Hirsi.

Public documents, for instance, place Hirsi and Omar living in a home together in the Cedar Riverside neighborhood of Minneapolis in 2009, the year Elmi and Omar married, and two years before Omar claims she reconciled with Hirsi.

Specifically, local courts listed this address for both Omar and Hirsi in separate traffic violations in mid-2009, the year Omar and Elmi married. 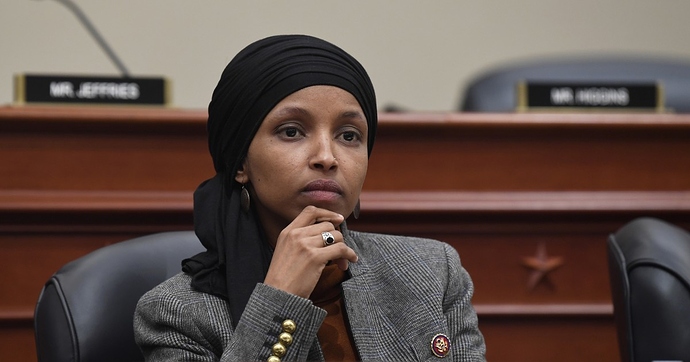 Let’s not forget about the current investigation of Ilhan Omar for 8 years of tax fraud. She’s going down. 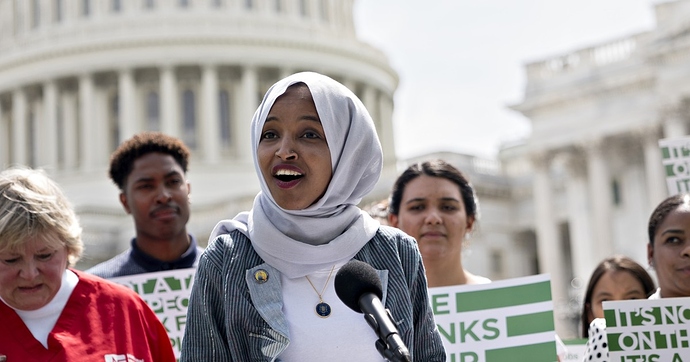 Ilhan Omar may have broken federal tax law, according to new campaign finance...

A report released by the Minnesota Campaign Finance and Public Disclosure Board shows that Rep. Ilhan Omar broke federal tax law by filing her taxes jointly with a man to whom she was not legally married.

It’s not a minor triviality. Its actually a major deal - crowds of white people chanting ‘send her back’ in reference to an immigrant politician at a presidential rally is the embodiment of Fascism to the Left…

It would have been unthinkable even a few years ago, in fact. Anywhere.

Just like everything else this too shall pass! This is just fodder for the bird cage! In few days no one will remember!

No just her! She should be deported or thrown in jail for committing fraud! You guys love a martyr like flies like cow dung, you are so predictable! Thanks for contributing!

If she did commit fraud, she should be prosecuted. It isn’t hard.